Our technical team at Dinafem Seeds study the concentration levels of active compounds found in the different cannabis strains. This is done for two main reasons. On the one hand, for plant selection in breeding programs aimed at creating new cannabis strains; and, on the other hand, for establishing the characteristics of the seeds from our catalogue, so that we can offer growers objective information about them. This analysis information appears in our seed data sheets. As you can see in this example, the sheets are divided into two sections: a bar chart showing cannabinoid composition, and a circular graph indicating terpene composition.

It is important to know what to look for so that we can interpret these graphs correctly: predominant cannabinoids and terpenes, their concentration, etc. Let's look at all this in more detail. 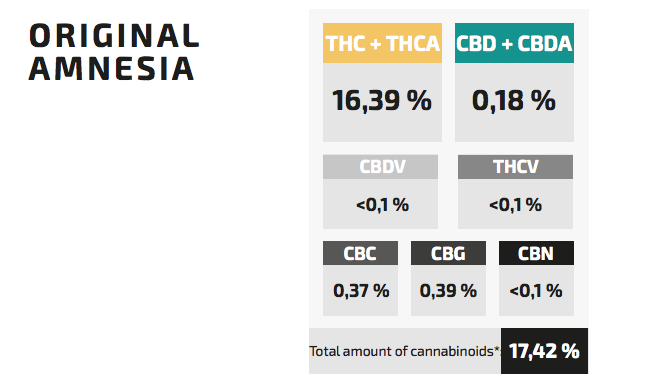 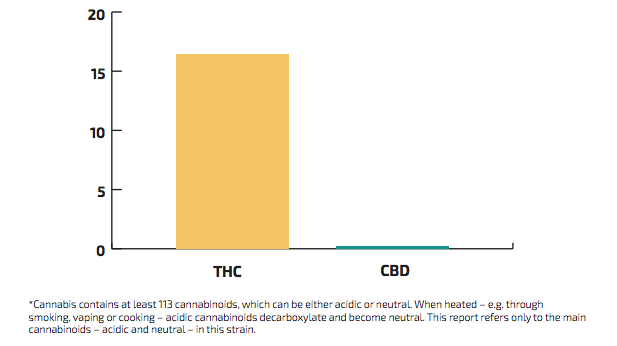 First of all, let´s remind ourselves of what cannabinoids are. Cannabinoids are those compounds that connect to the cannabinoid receptors in the human body. By means of this interaction with the endocannabinoid system, cannabinoids from the Sativa plant produce different effects in humans. The following are the different cannabinoids found in the Dinalab analysis data sheets, that are included in the 'total amount of cannabinoids' count: THC + THCA, CBD + CBDA, CBDV, THCV, CBC, CBG and CBN.

As we can clearly see in Dinafem's analysis sheets, the only cannabinoids with a concentration higher than 0,1% are THC and CBD. Up until now, our breeding programs have concentrated on creating genetics with high levels of these two compounds. Strains with high THC levels include the legendary Moby Dick, Critical +, or the more recent Gorilla. CBD-high, virtually THC-free varieties comprise Dinamed CBD and Dinamed Kush CBD Auto. In the middle of the spectrum we find other genetics with well-balanced THC and CBD levels, such as Bubba Kush CBD and Amnesia CBD.

So far, we still don't have any Dinafem strains with high CBN, THCV, or CBC levels. So what conclusions can be drawn from the THC and CBD concentrations present in Dinafem genetics? To learn how to interpret these findings, we will start by debunking an urban myth: the higher the THC level, the more potent the high. This is completely false. If a THC-rich strain has high levels of CBD as well, cannabidiol will reduce THC's phychoactive effect. 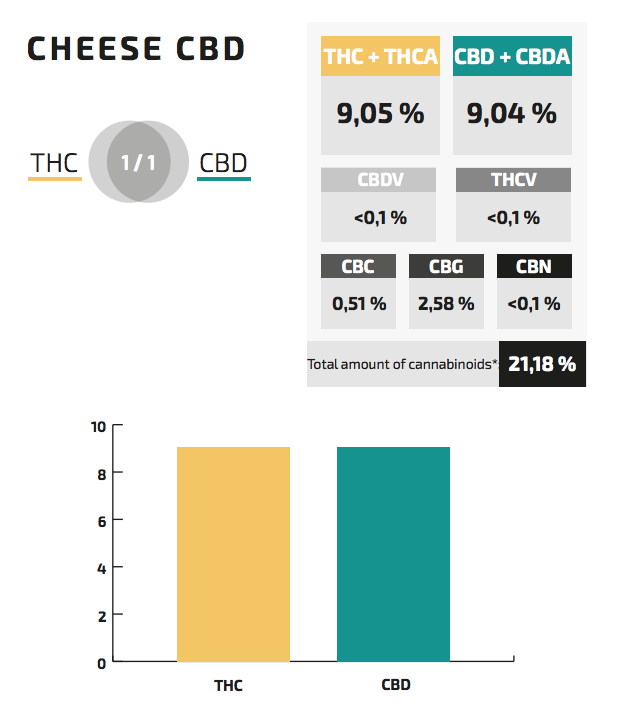 It is clear then that the main factor here is not the level of THC that the plant has, but its THC/CBD ratio. Let's have a look at Cheese CBD, for example. As we can see in the cannabinoid bar chart, THC and CBD levels are very similar (hence the 1/1 ratio.) Therefore, CBD will hinder THC's phychoactivity on this strain.

Our lab technician Oier Aizpurua often says: "When medicinal cannabis is finally legalised, it will be mandatory for all strains with therapeutic purposes to have a minimum CBD level, as this is the only way to guarantee the modulation of THC's psychoactivity." Thus, patients will be able to enjoy THC's benefits (for instance, increase of appetite or relief for sleep disorders) with the certainty that they will not suffer adverse effects like transient memory loss, tachycardia, or anxiety. In other words, they will benefit from cannabis therapeutically but will not get high. We will find out whether Mr. Aizpurua is right when legalisation finally arrives.

The total amount of cannabinoids of any specific strain is a valuable figure because it tells us about the compounds that are present in the plant. Regardless of what they are, if the cannabinoid count is low, for example less than 5%, this means that the plant has not developed many active substances capable of interacting with the endocannabinoid system in the human body. The plant may smell nice, look beautiful, or even taste good (depending on terpene concentration), but it will not produce any psychoactive effects.

As we have already explained in this article, out of all the chemical compounds present in the cannabis plant, around 140 of them belong to this group of organic hydrocarbons. Terpenes are volatile molecules that evaporate easily and reach our nose to help us identify the plant. In fact, terpenes are not only found in marijuana but also appear in many other plant species. There are three types of terpenes: monoterpenes (like limonene, myrcene, pinene, terpinolene, and linalool), sesquiterpenes, and triterpenes.

The circular graphs of Dinafem's genetics analysis normally show around ten terpenes, but they don't all have the same importance. According to our lab technician Pierre Antoine Aulas, "the terpenes that shape a strain's most characterisic aroma are the three that appear in higher concentrations." So if we want to know what a strain smells like, we need to have a look at the three bigger wedges of the 'terpene cheese.' The rest of the terpenes provide complexity to the main aroma and are responsible for the back notes, those tones difficult to distinguish, that give a genetic its individual stamp.

Let's look at Original Amnesia's graph, for instance. The main terpenes are b-caryophyllene, terpinolene and limonene. From this we can infer that the plant smells like earth, wood, and lemon. Nevertheless, it's important to remember, as Mr. Aulas explains, that "it is easier to identify a strain's aroma from its monoterpenes rather than its sesquiterpenes, as monoterpenes are extremely volatile and their smell reaches your nose quickly." This means that monoterpenes evaporate quickly with heat and can be lost more easily at harvest time, whereas sesquiterpenes are heavier and remain in the buds for longer. So if you harvest quickly when it's warm, you're likely to lose the monoterpenes on your crop, and what will remain is a mix of sesquiterpenes.

The most common monoterpenes are limonene, myrcene and pinene. The best method to keep these in your buds is to dry and cure them slowly and in the dark, which will restrict the oxydation process. For best results, it is advised to vacuum seal your buds, or store them in glass jars.

This figure indicates the total amount of aromas that the plant holds. If the number is low, the plant is poor in terpenes, and it will therefore lack smell. A good 1 g cannabis sample from a plant grown in optimum conditions will show between 2% - 4% terpene composition.

Characteristics of the main terpenes

Terpenes not only give out aroma and flavour but also produce some effects on our body.

Myrcene smells earthy and produces a relaxing effect. It is responsible for the so-called 'sofa effect.' Some say that CBD gets you high, but it is frequently due to a high concentration of this monoterpene in cannabidiol-rich strains. If you suffer from sleep deprivation or muscle tension, you should grow strains that have myrcene as one of their three main terpenes.

Caryophyllene or β-caryophyllene is a very special sesquiterpene. It joins CB2 receptors in the endocannabinoid system, showcasing anti-inflammatory and analgesic properties. It is also one of the less volatile terpenes.

Linalool smells of lavender, and it is regarded as an antidepressant in the aromatherapy industry. Some studies also suggest that it has an anti-inflammatory effect on the body.

This monoterpene has a citrusy aroma and has proven effective in elevating the mood. Many cleaning products and air fresheners try to replicate its scent to create a pleasant, clean sensation when entering a room.

Pinene is a bicyclic monoterpenoid that exists in two isomeric forms: α-pinene and β-pinene. This means that, while its molecular form is always the same, it exists as two chemical structures (alpha and beta) with different properties. The most common isomer in cannabis is α-pinene. It smells of pine and interacts with the endocannabinoid system, offering anxiolytic, antidepressant, and anti-inflammatory properties, to name a few.

Terpinolene is one of cannabis least-common terpenes. Its aroma is especially fresh and it holds antifungal, antibacterial, antioxidant, and sedative properties.

This sesquiterpene, also known as α-humulene or α–caryophyllene, is a β–caryophyllene isomer. It smells of hop, is a natural appetite suppressant, and also showcases anti-inflammatory properties.

This article would not have been possible without the collaboration of the Dinafem Seeds laboratory technicians, Oier Aizpurua and Pierre Antoine Aulas, who kindly answered all our questions and showed us how they work in the Dinalab:

Oier Aizpurua holds a BSc in Chemistry, an MSc in Toxicology and a PhD in Analytical Chemistry from the University of the Basque Country. He specialises in cannabinoid and terpene extraction and analysis, as well as in the analysis of cannabinoid metabolites in biological samples.

Pierre Antoine Aulas holds a BSc in Pharmaceutical Sciences from the University of Lille, completed studies on Plant Sciences in Manipal, India, and has an MSc in Neuropharmacology, focusing on CBD formulations as a treatment for children suffering from epilepsy in Israel.