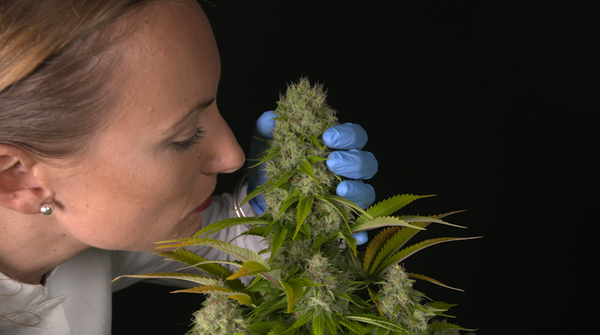 Out of the many chemical compounds present in cannabis, some 140 belong to this group of organic hydrocarbons known as "terpenes". Terpenes are volatile molecules that evaporate easily and reach the nose helping us identify the vegetable we are looking at. In fact, terpenes are not exclusive to marijuana, but they are present in many other plant species. These compounds, which account for cannabis aroma, have most likely played a major role in mankind's strain selection and cannabis domestication, as the aroma is very much taken into account in breeding.

Terpenes are organic compounds made up of carbon atoms and hydrogen that consist of repeating units of a 5-carbon molecule known as isoprene. According to the number of repetitions (isoprene units), they are classified in different groups, and so cannabis has:

The terpenes found in the chemical composition of cannabis are synthesized in the secretory cells of glandular trichomes and its production is increased with light exposure. Just us cannabinoids, they are mainly found in resin.

What are the functions of terpenes in cannabis plants?

These fragrant compounds are found in higher concentrations in unfertilized female cannabis flowers and play a major role in protecting the plant from bacteria, fungus, insects and other environmental stresses.

The number of terpenes and their composition varies according to the genetics of each plant and to the growing conditions. As we have just explained, these aromatic compounds are used by plants to repel predators but also to attract pollinating insects. There are several factors that can affect their production: the weather, the maturing period, the nutrients, the soil and even the time of day of harvest.

Even if each plant has its own unique terpene profile, the smell of the plants of the same variety tends to be similar, which is helpful when it comes to identifying the strain. This is because the terpene combination in the individuals of a same genetics is very similar, and so we can tell a Cheese from a Critical + or an Original Amnesia through smell.

Terpenes as precursors of cannabinoids

Terpenes are believed to be involved in cannabinoid production, as these are made up of terpene blocks and phenol groups. In standard growing conditions, the terpene and the cannabinoid levels have been found to be correlated, which could be explained by the fact that both monoterpenes and sesquiterpenes are synthesized in the same glandular trichomes as cannabinoids.

How is terpene oil (aka cannabis essential oil) extracted?

Cannabis essential oil can be extracted via steam distillation, a simple and traditional process in which the steam passes through the plant material (marijuana) taking the oil with it. Contrary to cannabinoids, terpenes are water-soluble, this is why this method ensures that only terpenes – and not cannabinoids – are extracted. As a result, the obtained essential oil has no psychoactive effect whatsoever.

The process is simple: you just have to place the cannabis together with some water in an R. B. flask and heat it up so that the water turns into steam. This way, the terpenes are transferred to a second flask through a glass outlet along with the steam, were it is refrigerated and turned back into water. Once in liquid state, the essential oil containing the terpenes floats on top of the water and can be easily separated.

What are the applications of terpene essential oil?

With the above described process, it is possible to extract the terpenes of all the cannabis strains known to date. Can you imagine having the flavour and aroma of an OG Kush in the palm of your hand? Or opening a bottle and being carried away by the powerful fragrance of a Cheese? Companies such as Terpalchemi are already extracting the aromatic essential oil of cannabis and marketing it in several countries around the world.

These extracts are delicacies that are sold in small quantities, as huge amounts of cannabis are necessary in order to produce a tiny amount of oil. Here are some of its applications:

And the list doesn't end here. With the FDA and other agencies having classified it as a safe substance and producing no psychoactive effects, the possibilities are endless.