These are exciting times for all of us working in the cannabis industry. What used to be the 'underground scene' has taken a huge leap to become a focus of attention within the scientific community. Clinical research on the applications of cannabinoids has unlocked the door to cannabis legalisation in many countries, and has also attracted mass media attention. Nonetheless, further research is still needed to understand the interaction between cannabinoids and other plant substances, and the human body. For now though, let's lay the foundations: what are cannabinoids and how do they interact with our body?

The word 'cannabinoid' does not only refer to the chemical components produced by the plant Cannabis Sativa L. Cannabinoids are all those compounds that, regardless of their origin, bind to the cannabinoid receptors in the brain and other parts of the body. As previously explained in another post, these receptors are part of what is called the endocannabinoid system, a complex network of cell receptors found throughout the human body (in the brain, nervous and immune systems, and other peripheral organs.) The two main types of receptors found in the endocannabinoid system are CB1 and CB2. They regulate the body's homeostasis, a stable equilibrium where everything works smoothly, through their interaction with cannabinoids, be it plant-derived or endogenous. Because, guess what: our body produces cannabinoids too!

What are the different types of cannabinoids?

We can classify cannabinoids according to their origin:

More than 500 compounds are produced by the marijuana plant, and over 100 of these are phytocannabinoids. Phytocannabinoids are carbocyclic compounds characterised by a 21 carbon structure, normally consisting of three rings: benzene, cyclohexene, and tetrahydropyran. The main cannabinoids in the cannabis plant are THC and CBD. Phytocannabinoids in cannabis appear in their acidic form, which means that the plant is only able to synthesise cannabinoids directly in their non-psychoactive form; and it is through the decarboxylation process that these compounds become active. Put simply, the cannabinoids present in the resin of fresh buds, either freshly cut or still in the plant, are THCA and CBDA. After decarboxylation, which occurs when we apply heat or during the bud drying and curing process, these acidic, non-psychoactive cannabinoids transform into THC and CBD.

To give you a clear example, if you ate a huge, freshly-cut cannabis flower, you would not feel any effects, because partial cannabinoid decarboxylation takes place through oxidation during the bud curing process. But if we want all cannabinoids to become active, then heat must be applied, which is what happens when we smoke, vaporise or cook with marijuana. 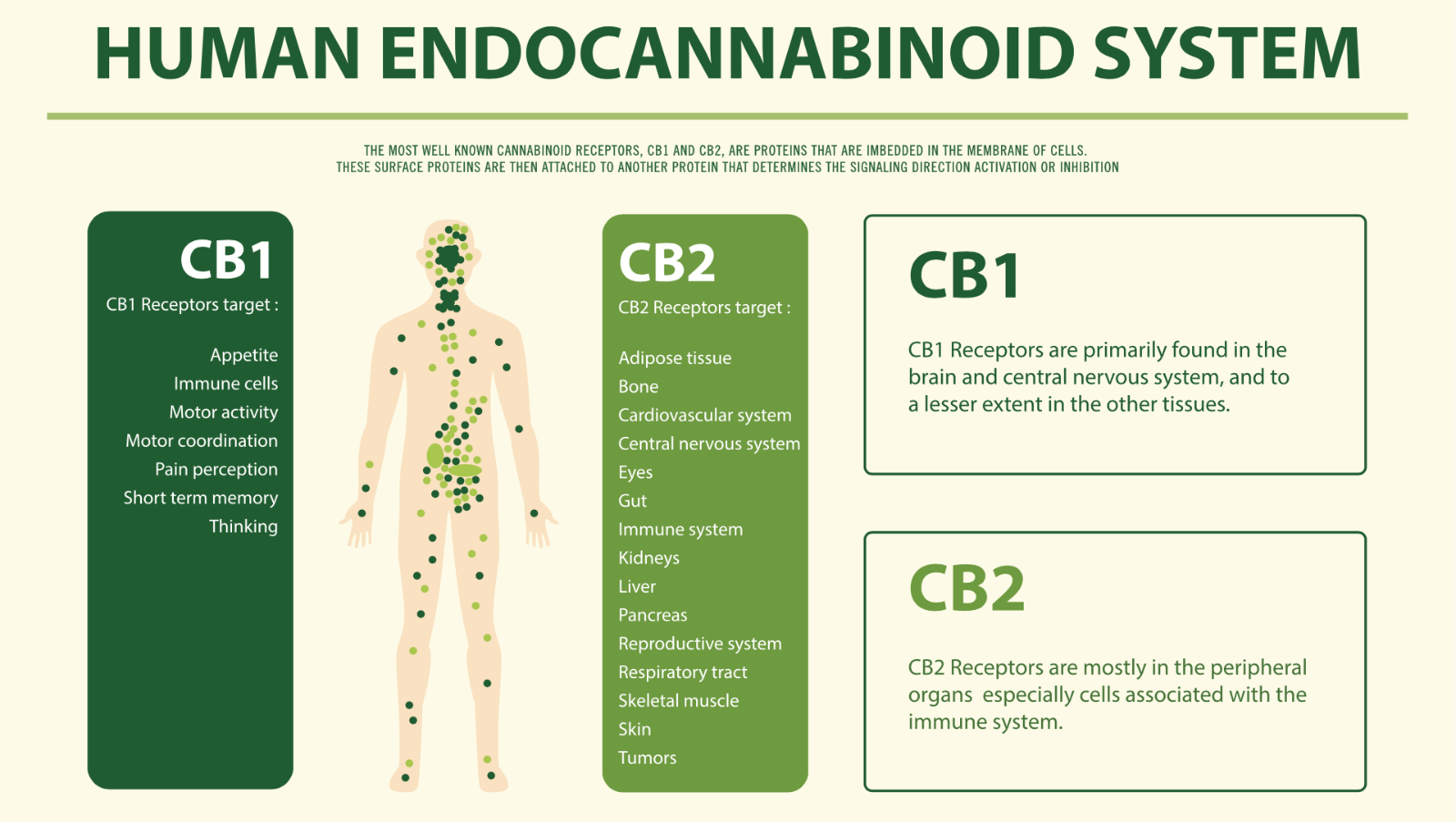 So far, the scientific community has successfully identified two main endocannabinoids: anandamide and 2-arachidonoylglycerol (2-AG). Interestingly, these two have resembling structures to those of THC and CBD, which are the main cannabinoids produced by the marijuana plant. Anandamide has a similar structure to THC and it causes similar processes in the body; in simple words, it is a version of THC produced by the human body. That is why it binds to the same receptors, located mainly in the brain, and acts as a neurotransmitter and mood enhancer. Healthy habits such as a good sleep routine or regular exercise encourage anandamide production. Funnily enough, anandamide is also known as the 'bliss molecule', with some studies indicating that it encourages neurogenesis (new neurone development) in the brain areas responsible for memory, learning, and emotions. On the other hand, 2-AG interacts with the receptors located in the central and peripheral nervous system, and it shows great similarity to CB2 receptors, this being the reason why it contributes to appetite and immune system regulation.

These cannabinoids are designed in labs. Although it has been proved that they are less effective than phytocannabinoids, they have been used in the production of some medication like MARINOL, which is based on Dronabinol, a synthetic form of THC.