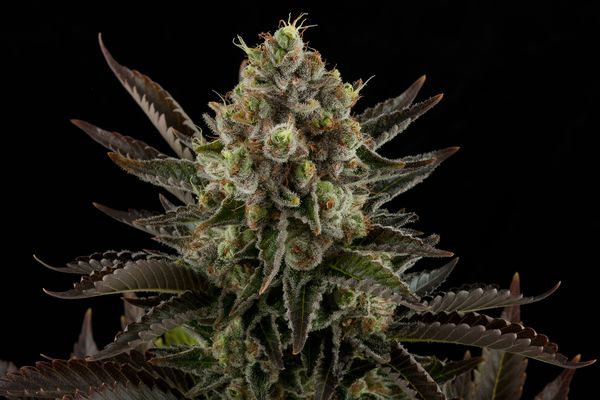 Moby Dick: The potency that won Dinafem its place on the cannabis world map

Herman Melville's legendary whale gave this strain her name. That's because her effect could be compared to a powerful fin stroke of the novel's main character as her THC content approaches 21 %. Our seed bank's breeders obtained this perfect ratio by crossing a Haze and a White Widow. The resulting hybrid (60 % Sativa, 40 % Indica) offers the cerebral stimulation typical for a Sativa complemented by the Indica's physical relaxation. Her Sativa morphology won't slow her flowering down: Moby Dick will offer tight, compact buds in less than 70 days. This is because beyond her effect, her high productivity is also one of the main features of this genetic, which is also very pest resistant.

Critical + and Critical + 2.0 or the narcotic relaxation power of THC

This strain is our seed bank's prettiest child. Her great productivity, pest resistance and healing effect have turned her into the favourite girl of many growers. A large majority will thus confirm without batting an eyelid that Critical + provokes a powerful sensation. In fact, given her high THC content of about 20 %, this strain is frequently used for medical consumption. This cannabinoid causes a relaxing and narcotic effect ideal to combat muscle and joints aches. But of course, she can also offer a gentler effect if you prune her earlier, when the THC hasn't ripened so much yet. Consuming this strain will be synonymous with relaxation and joy then.

As her name indicates, this is a Kush, and not just any but one of the great ones. Resulting from a cross-breeding of a Critical + and an OGH Kush, this strain will delight any lover of the Californian strains, whom she resembles, but with an extra dose of taste and productivity. Her effect is great, too: directly to the brain at first, provoking a strong stimulation that can last up to several hours, and corporal later on. This plant has the ability to distract you from your concerns and rise you to a state where there's no room left for stress and anxiety. As long as she's consumed moderately, of course: too high a dose of any strain with THC-levels of more than 20 % could cause the opposite effect.

Relaxation and rest beyond compare: This Indica champion, who has won first prizes on several occasions, offers a potent effect beyond compare. She manages to relieve muscle tension like few cannabis plants can. Although the first thing to draw your attention about Purple Afghan Kush are for sure her magical purple shades, once you've consumed her you will see that her effect is just as striking as her morphology. Her sedative physical effect comes with notes of incense and freshly cut pineapple, making the terpenes turn into an infallible aroma therapy.

Original Amnesia: An euphoria only suitable for regular consumers

Euphoric, stimulating and cheerful: this is how one could describe the sensation provoked by Original Amnesia. Sativa dominant, this plant's effect is absolutely enriching. As soon as you've consumed her, your desire to talk, to laugh, to share our impressions will multiply. Therefore, we recommend consuming this strain among friends. You should share its effect rather than enjoy it on your own. This marijuana smelling like Haze, lemon and incense is not in vain the most demanded strain in Dutch coffee shops.

Critical Jack: The perfect strain to arise a cannabis debate

This seed stems from the crossing of a Critical + and a Jack Herer. And it doesn't bear the name of one of the most important cannabis activists in history in vain. Critical Jack truly honours Jack Herer, the American defender of the medical, spiritual and economic advantages of cannabis and hemp, by rising the cannabis' virtues to a higher level: through her vigour and her excellent citrus aromas, but especially because consuming Critical Jack will awaken your desire to debate and talk. With a relaxed body and a smile on your lips, you'll just have to chat! As good Sativa (60%), her effect is stimulating. That's why we only recommend her for those who wish to get carried away and speak out their innermost thoughts.

White Widow: The favourite strain to deal with medical problems

This Indica dominant hybrid is one of the most demanded strains for medical applications. Whenever it comes to depression, muscle contractions or stress, this strain with a THC content between 12 % and 16 % is the big star. Her therapeutic properties are simply infallible thanks to these levels of tetrahydrocannabinol able to reduce pain and anxiety. And we say infallible because she is not precisely a "light" strain: This plant's cannabinoids are potent and connect perfectly with the human body and mind.

This cannabis strain is perfect for lovers of Sativa seeds with exotic features. Dinachem results from the cross between a Gueva Chem and an elite clone of the Original Chemdawg 91. This project was realized thanks to the valuable contribution of the famous American breeder "Chemdog", who provided us the opportunity to use a series of strains of his property. Her effect is cerebral, euphoric and stimulating at first and evolves into a state of deep physical relaxation later, all of which comes with a stable and long-lasting potency perfect for pleasant moments of rest.

Shark Attack: The inescapable attack from the depths

This strain isn't called shark attack because her effect resembles an encounter with this deadly animal, but because there's no way back once you've consumed it, just like when a shark catches its prey. From that moment on, you'll sink into an unprecedented state of relaxation. Shark Attack is an Indica queen ideal for those who are looking for a calming, relaxing marijuana strain that flowers fast and adapts well to small indoor spaces.

Cross-breeding an Afghani with a Skunk gives birth to a hybrid of intense aromas with notes of Kush, Skunk, citrus fruits, sandalwood and spices. But what's most intense is not her scent but her effect. Power Kush is potent, balanced, physical, cerebral and long-lasting. No doubt she is the perfect ally to reach a pleasant state of relaxation. But be warned, because once this peace is there, it won't go away so easily.