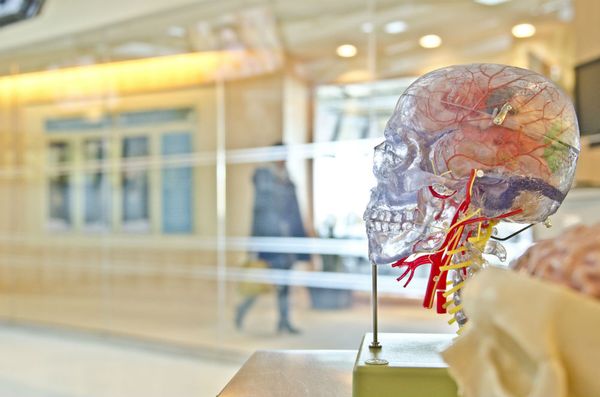 In order to understand why cannabis may influence the development or the recovery from certain mental disorders, first we need to understand why it interferes with brain function. Well, the reason behind the cannabis-brain interaction is that the plant produces a type of organic compounds known as cannabinoids that can activate the human endocannabinoid system. This system consists of two types of receptors: CB1 and CB2. Many CB1 receptors are located in the brain, the interaction between them and cannabis affecting our mental processes.

As explained in the article "Cannabinoids and the Endocannabinoid System" written by German scientist Franjo Grotenhermen, "CB1 receptors are mainly found on nerve cells in the brain, spinal cord and peripheral nervous system, but are also present in certain peripheral organs and tissues, among them endocrine glands, salivary glands, leukocytes, spleen, heart and parts of the reproductive, urinary and gastrointestinal tracts".

According to the article, "Many CB1 receptors are expressed at the terminals of central and peripheral nerves and inhibit the release of other neurotransmitters. (...) CB1 receptors are highly expressed in regions of the brain, which are responsible for movement, memory processing and pain modulation, while their expression in the brainstem is low, which may account for the lack of cannabis-related acute fatalities. The brainstem controls, among others, respiration and circulation".

We have covered the interference of cannabinoids with some brain areas. Let's now focus on the active principles of cannabis that are responsible for this interaction and on the effect they may have on human behaviour. Before further explanation, mention must be made of Rafael Mechoulam, the researcher who discovered the properties of one of the active principles of cannabis, the now famous CBD or cannabidiol, the cannabinoid that is responsible for many of the benefits attributed to cannabis.

The beneficial properties of cannabidiol are attributed to its antagonistic interaction with THC. While THC binds mainly to receptor CB1, CBD has a preference for receptor CB2, which modulates the psychoactive effects of THC and allows cannabis to be used as a non-psychoactive painkiller.

Many studies suggest that CBD helps reduce anxiety. As stated in the study "Cannabidiol as a Potential Treatment for Anxiety Disorders", dated October 2015 and carried out by Blessing EM, Steenkamp MM, Manzanares J and Marmar, "Overall, current evidence indicates CBD has considerable potential as a treatment for multiple anxiety disorders, with need for further study of chronic and therapeutic effects in relevant clinical populations".

On the other hand, the study "Antidepressant-like and anxiolytic-like effects of cannabidiol: a chemical compound of Cannabis sativa", carried out by Mello Schier AR, Oliveira Ribeiro NP, Coutinho DS, Machado S, Arias-Carrión O, Crippa JA, Zuardi AW, Nardi AE and Silva AC1, suggests that "Cannabidiol (CBD) is a constituent (…) with great psychiatric potential, including uses as an antidepressant-like and anxiolytic-like compound".

The study also highlights that "studies of animal models (…) suggest that CBD exhibited anti-anxiety and antidepressant effects in animal models discussed. (...) Most of the studies demonstrated a good interaction between CBD and the 5-HT1A neuro-receptor".

The popular belief is that cannabis triggers psychotic episodes and schizophrenic behaviours, and while there are plenty of personal experiences on the matter, we have struggled to find scientific evidence.

Let us recall that psychotic disorders cause a temporary loss of contact with reality, which usually manifests itself as hallucinations or euphoria. The cannabinoid that may induce such states is THC (tetrahidrocannabinol), which was also first isolated by Rafael Mechoulam and his peer Yechiel Gaoni in 1964 at the Weizmann Institute of Science, in Rejovot (Israel).

THC, traditionally the most talked-about active principle of cannabis, is said to have psychoactive properties. On this regard, chapter sever of "The health and psychological consequences of cannabis use" published by the Australian Department of Health, states that "cannabis use may in certain circumstances be a contributory cause of major psychological disorders such as psychotic disorders".

This compendium also suggests that "THC is a psychoactive substance which produces some of the symptoms found in psychotic disorders, namely, euphoria, distorted time perception, cognitive and memory impairments" (Brill and Nahas, 1984); Halikas, 1971 and Thornicroft, 1990).

Furthermore, reference is made to the fact that "under controlled laboratory conditions with normal volunteers, THC has been shown at high doses to produce psychotic symptoms which include visual and auditory hallucinations, delusional ideas, thought disorder, and symptoms of hypomania" (Georgotas and Zeidenberg, 1979; National Academy of science, 1982).

That said, there are also some upsides to THC. In fact, researchers like Manuel Guzmán, Professor of Biochemistry and Molecular Biology at the Complutense University of Madrid, have studied the anti-cancer properties of THC. In a study co-written for Molecular Cancer, he concluded that cannabinoids exert an antitumoral effect in the MMTV-neu model of breast cancer: THC "not only reduces tumour growth and metastasis, but also blocks tumour generation per se".

The link between cannabis and depression – depression understood as a syndrome characterised by deep sadness and a decrease in mental functions, often accompanied by neurovegetative disorders – has been more widely researched, with all studies pointing to the antidepressant effects of CBD.

According to a study carried out by the Pharmacology Department of the School of Pharmacy of the University of Mississippi (Antidepressant-like effect of delta9-tetrahydrocannabinol and other cannabinoids isolated from Cannabis sativa L.), "The antidepressant action of cannabis as well as the interaction between antidepressants and the endocannabinoid system has been reported".

Results showed that "Delta(9)-THC and other cannabinoids exert antidepressant-like action, and thus may contribute to the overall mood-elevating properties of cannabis". The scientist responsible for the study put mice into extreme situations (forced swimming and tail suspension), and found that stress-associated depression symptoms decreased when they were administered with THC.