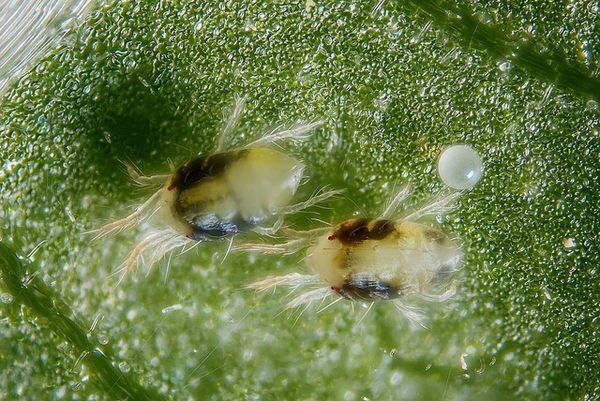 Whiteflies, caterpillars, aphids ... if you are a cannabis grower you've probably heard about these insects more than once, and not good things. There are many pests that can endanger your crops. To deal with them the best approach is prevention, being aware of the symptoms and, above all, knowing how to eradicate them in time. With our tips you'll be able to identify all of them with ease and tackle them.

This is perhaps the most selective pest, as it does not attack all strains of cannabis in the same way. About two weeks after depositing eggs inside the leaves, the larvae begin to "dig" tunnels: this is the first visible sign that you must take action against them.

Brown lines that can be seen on the leaves when the larvae are making their peculiar tunnels, or mines, eating the plant material in their path. It is also possible to find small holes made by adult flies.

It is unlikely to appear indoors, but if the leaf is not greatly damaged you can follow its path and remove the larva with your nails (it is "trapped" within the leaf). Outdoors you can choose insecticides, such as Spinosad, which should be used cautiously and only when there are no bees nearby. To get rid of adult specimens, which can continue laying eggs, there's nothing like some adhesive strips around the crop to catch them.

This tiny insect, which usually occurs where humidity levels are high and on indoor plants, sucks the sap from the leaves and kills the cannabis plant in a short period of time: an adult spider can take a million nibbles in less than a month. If there are several of them, in one night they can wipe out an entire plantation.

White spots on leaves are the mark left by the red spider mite when it sucks the sap. You might also see black or yellow spots on both sides. Sometimes they are overlooked, and can be confused with a lack of nutrients. Some people confuse them, measuring just a few mm and ranging from brown to an orange red, with spots, so it is a good idea to use a magnifying glass. At times they also leave a kind of cloth on the leaves.

Your growing space should be well cleaned and ventilated. The red spider mite thrives in dry areas and reproduces very quickly if the temperature exceeds 27 degrees. Therefore, keep the temperature below 25 degrees, and relative humidity at 55-60%. Once the plants or leaves affected are detected they can be cleaned with a mixture of alcohol and water, applied with an atomiser, and with the water constituting at least 40% of the liquid, to avoid damaging the leaves.

On the market there are different products to combat red spider mites. Neem oil, potassium soap and pyrethrum oil are very good choices. Another option is Ecotenona, diluting 2 ml of it per litre of water: it is applied on the leaves to penetrate the nervous system of the spider mite when it feeds. If you're not sure if the eggs or adults have survived, you'll need to use a different product.

Caterpillars need vegetation to form their chrysalis, so they can ruin your plantation in the blink of an eye, as they eat at a prodigious rate. Thus, when caterpillars appear on your cannabis plants it is important to act as soon as possible.

If you spot some very small eggs, yellow or translucent in appearance (especially on the back), and some tiny black droppings on your leaves, beware, as these are two of the clearest signs. You might also see teeth marks on your leaves. And you can even find rotten buds, as caterpillars are able to penetrate inside.

Once detected, caterpillars can be removed by hand. The ideal approach is to combine this with an insecticide made from an infusion of pepper and garlic. Another option is to introduce wasps of the genus Trichogramma (widely used to control pests), the spined soldier bug (Podisus maculiventris), or a biological treatment containing Bacillus thuringiensis. When the plant begins to dry it must be turned over and thoroughly checked to verify that there is nothing left, as the pupae could stay in the room and return to attack the next crop.

A real headache, especially if the plants are from cuttings. This tiny insect is very fast, so you must act quickly to prevent it from doing damage. Occasionally spraying with Neem oil or potassium soap can be preventive, but if they are already wreaking havoc you will have to get down to work.

Using yellow sticky strips around your crop is a good way to know if there is a thrips plague, some are bound to get stuck to it. You'll also know you have it if you see silver markings on the surface of the leaves, sometimes accompanied by dots, which are droppings. Another sign is brittle leaves, as the thrips suck the chlorophyll until they are stuffed.

Again, spraying with potassium soap or Neem oil will be useful to eradicate this pest, as long as the flowering process has not yet begun. If it has, you had better include predators, such as wasps or orius (insidious flower bug). These species are not affected by the Verticillium lecanii fungus that anti-thrips biological control products often contain, so they can be combined.

The whitefly, another old nemesis of cannabis cultivators, sucks the sap from the leaves to weaken the plants. It is very common, but it is not among the most lethal.

The first symptom is very clear: if you shake the plants and see flies flying off it, you've got them. You can also see how your leaves are yellowed by chlorosis due to their sucking of the saps, the honeydew that these insects secrete, or even a white powder on the underside of the leaves.

Once these pests are discovered (there are preventive methods, such as planting repellent crops, like basil), you can use the Encarsia formosa wasp or Macrolophus caliginosus (a kind of stink bug). Another option is to attract flies with yellow strips, or spray with Neem oil or potassium soap; these solutions must be applied every five or six days until the flies are eradicated.

Another very fast-spreading plague, both in terms of reproduction (30 to 100 larvae per day) and their capacity to jump from one plant to another. Like the red spider mite, they feed on the leaf sap. More prevalent in the spring, time is of the essence once detected.

Dry, yellow leaves, colonies under leaves or stems, and a kind of honeydew that they secrete are some of the symptoms that should sound all the alarm bells. As if this were not enough, the honeydew attracts ants, such that they are a warning sign too.

In addition to changing clothes before entering your cultivation area, to keep from bringing in aphids from outside, once this pest is detected there are several options: they can be removed manually, or by crushing them, as they hardly move. You can also introduce predators like lacewing larvae, which feed on them. Release about 20 per plant and repeat each month. Other options are the parasitic wasp, ladybugs (for outdoor crops) or the Verticillium lecanii fungus. Finally, you can spray the plants with pyrethrum two or three times, with breaks of five to ten days.

Ironically, too much fertiliser can cause the appearance of aphids, so you need to use them carefully. A close eye must also be kept on growing conditions, as a dry area favours its spread. And when decaying leaves are detected they must be removed.

And we finish with another plague that will ring a bell even with those who do not cultivate cannabis: cochineal. Both indoors and outdoors, it can act silently. Even worse: they are small (therefore, difficult to detect) and resistant to some insecticides. If they reach the roots of your plants, the problem is serious. Not to mention their droppings, which contain a fungus that destroys plant material.

You'll recognise them by their white or brown colour and a kind of white fluff. They begin to appear on the stems before spreading all over the plant. If there are plants nearby like cacti, roses or olive trees, you must be extremely careful. And, as with the aphid, ants are another indication of their presence.

Plants must be checked, both cannabis and others nearby, to make sure that there is no plague. Once detected they can be easily removed by applying a 50% mixture of alcohol and water, and tapping the leaves with cotton balls. If any part of the plant is badly damaged, it is best to remove it.

This insect, whose scientific name is Sciridae (sciarid), is known as the fungus gnat or soil gnat. It measures about 4-5 mm, and during its life cycle goes through different phases: when it is a larva it lives in the substrate, then metamorphoses and emerges to the surface, transformed into a winged gnat.

This insect prefers moist places and can usually be found at the base of plants, which is where you should look. These are the signs that your cannabis plants are being affected by fungus gnats:

If you have detected this pest on your cannabis crop, these are some of the things you can take to get rid of them.

Nematodes are commonly known as roundworms, due to the shape of their bodies. Of the 25,000 recorded species, 50% are parasites on plants, insects and other animals. Although there are some species of nematodes that can actually be beneficial to your cannabis plants, there are other "bad" ones that mercilessly attack them, causing them to suffer and even die.

Snails and slugs have a viscous body that is soft and slippery, and measure from 1 to 9 cm long. In the case of the latter they are encased in a circular shell in which the mollusc lives. They move slowly and leave behind tell-tale trails of transparent and shiny mucus. This pest usually affects outdoor plants, and can be very dangerous to your cannabis, as these little guests have ravenous appetites and can do serious damage to your crop.