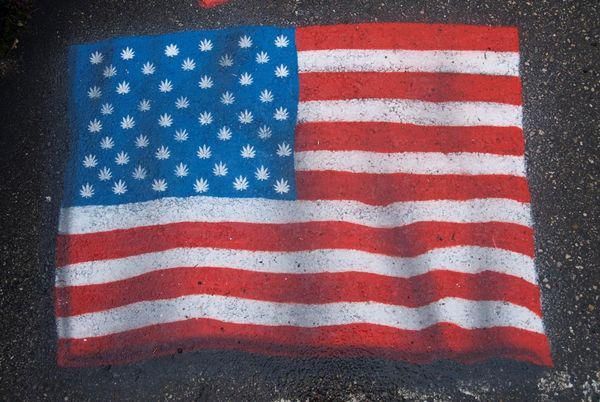 Just a few days ago the US Senate proposed something historic: considering the legalisation of cannabis featuring low THC levels for medicinal applications. It was a bipartisan group of senators, made up of Kirsten Gillibrand (Democrat, New York), Rand Paul (Republican, Kentucky) and Cory Booker (Democrat, New York) that presented the bill, dubbed the “CARERS Act” (Compassionate Access, Research Expansion and Respect States Act) whose objective is to end federal prohibition of medicinal marijuana through a series of major reforms.

According to Booker, “the federal government has long overstepped the boundaries of common sense,” and this bill seeks to resolve a system that has been broken for decades. It is initially aimed at the medicinal use of marijuana, to allow for advances in research with cannabis, and to help caregivers and doctors in the application of the different therapies - a major step forwards that will benefit, if it passes, the thousands of American patients who need marijuana-based medications.

Senator Gillibrand explained in a press conference that such a law would acknowledge that marijuana has been accepted for medical use for some time, and would also recognize the will of citizens of 23 states who have expressed that an immediate solution for patients who need this type therapy must be found. There are many voters who know that “it is not correct to deny those patients access to therapeutic cannabis.” 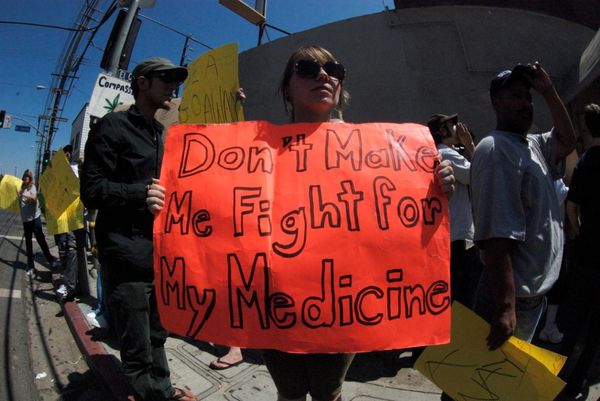 In the meanwhile, Michael Collins, from the Drug Policy Alliance, believes that it does not make any sense to maintain the federal prohibition when half of the US's states have already decided to legalise the plant for medical use. Rand Paul, one of the senators who presented the bill, stated that while nobody is against traditional medicine, it is also necessary to give a chance to medicine based on cannabis.

This bill seeks to alter marijuana's classification in the Controlled Substances Act. It is currently on Schedule 1, classed as a narcotic along with heroin, LSD, MDMA and other drugs that, according to the DEA classification, currently have no accepted medical uses.

Through this bill, marijuana would be placed on the same level as medicines like Adderall, Ritalin and Oxycodone (on Schedule 2), which are used to alleviate the pain from certain pathologies.

This reclassification would open up many opportunities for research on the effects and applications of cannabis, and would facilitate obtaining scientific licenses for its study by a range of scientific teams and centres. At present the DEA and the National Institute on Drug Abuse have a monopoly on this type of research with marijuana. As a pioneering state in biotechnology, and with the most progressive policies on marijuana, Washington could be one of the beneficiaries of these funds for research. And it could also have a clear advantage if its universities seek federal financing for research on cannabis. 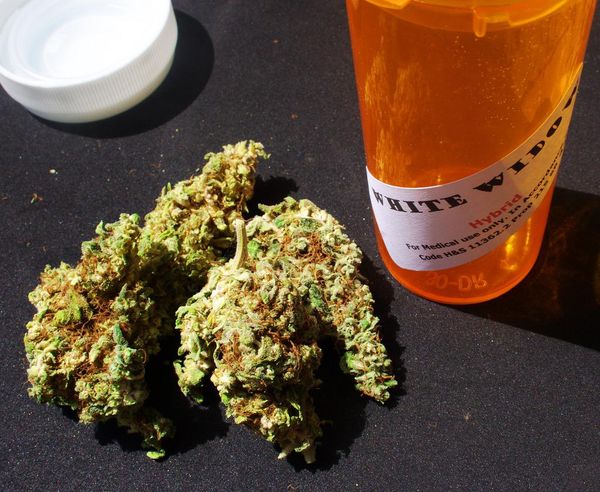 Paul believes that the time has come to determine when therapeutic cannabis should be used and when it should not. As things stand today it is not even possible to ascertain whether the plant is being misused in the states that have legalised it “because research isn´t even accepted.”

Kate Hintz was present at the presentation of the bill. She is the mother of a boy who needs to consume compounds of marijuana with CBD to treat his epilepsy and the seizures that he suffers from it. Hintz believes that, in spite of having fought for New York to allow medicinal marijuana, her cause will fail if therapeutic use is not permitted throughout the country.

A restriction that would be eliminated through the approval of this legislation would be the use and possession of cannabidiol, or CDB, as this non-psychoactive cannabinoid would be removed from the scope of the Controlled Substances Act, and the different states would be allowed to import CBD without any legal consequences. In addition, medicinal marijuana seeds with low THC levels could be legal in the USA if the law is approved. In fact, it has already been proposed to legalise strains of cannabis that are very low in THC and high in CBD, thereby making it legal to grow hemp in the USA, along with therapeutic strains, such as the famous Charlotte's Web. 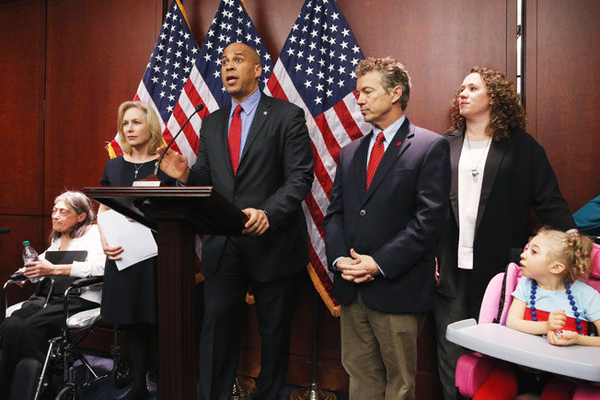 Gillibrand adds that federal laws currently fail to recognise the health benefits that medicinal marijuana can offer. Thus, this bill has been devised as a way “to create a way towards scientific progress.”

What has been happening for years is that, although marijuana has been legalised (both recreational use and medicinal) in several parts of the country, the federal government has always interfered, and it has the capacity to revoke certain decisions.

For example, although marijuana for recreational use is legal in Washington, it remains illegal at the federal level, which gives the Department of Justice the authority to intervene at any time. In short, federal authorities reserve the right to shut things down whenever they wish to. In theory the Drug Enforcement Administration (DEA) could raid legal marijuana stores, under federal law. This bill, if approved, would prevent the prosecution of those who consume or prescribe medicinal marijuana, and would keep states that have legalised marijuana from clashing with neighbouring states that have not.

Such was recently the scenario in Colorado, whose authorities were forced to turn to the nation's Supreme Court to defend the state against a suit brought by Oklahoma and Nebraska, which asked the Court to halt the marijuana legalisation process in their neighbour, considering it unconstitutional. These two bordering states seek to obtain a court order to prevent Colorado from complying with the measure known as Amendment 64, approved by its voters in 2012. Their suit argues that the measure conflicts with federal law and, therefore, violates the Constitution's supremacy clause, which establishes that state laws are always to be subject to federal law.

Colorado, for its part, has defended itself by accusing the federal government of not enforcing the Controlled Substances Act. It argues that Congress prohibited marijuana, but did not compel the states to enforce that prohibition. In a political statement last year the US Department of Justice recognised that it does not, in fact, have the resources necessary to detect all violations of federal law with regards to marijuana. This flaw would be resolved by this new law, backed by Republicans and Democrats, as federal sentences for the production, possession and distribution of medicinal marijuana would be lifted whenever state laws are being followed.

Another one of the law's aims is to legitimise marijuana-related businesses and allow them to work with banks. Until now the purchase of cannabis products in those states where it is legal has had to be made in cash, as payment by credit card is not permitted. Credit cooperatives have arisen and begun to provide services restricted to the marijuana industry, but on an almost token basis.

Improving this system would guarantee the security of dispensaries, which are frequently robbed due to the large amounts of money they handle in cash. The proprietors of these businesses must also pay their taxes in cash, which is, likewise, a security risk. In fact, the Washington Liquor Control Board actually had to remodel its headquarters and construct a reinforced room to protect all the funds it collects in cash. If this bill passes, means would also be provided to keep banks from rejecting cannabis industry companies as clients.

This law would make it easier to transport therapeutic marijuana between states, and for VA doctors to prescribe marijuana-based medication without the obstacles existing today. In the State of Washington alone there live more than 600,000 veterans, and marijuana has proven to be very effective in the treatment of post-traumatic stress disorder, one of the most common psychological conditions suffered by soldiers who come home after seeing combat. 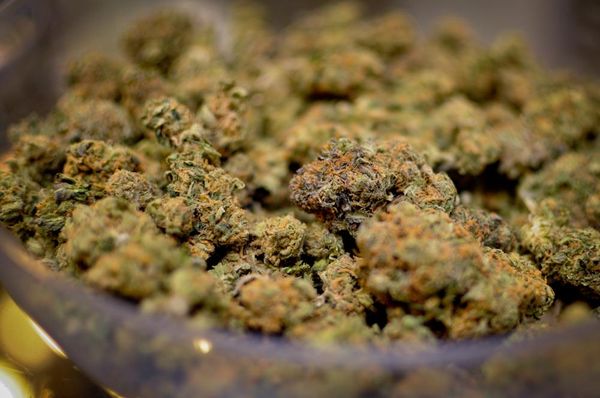 There is still much to be done, however. The bill, considered a historic decision, has a long way to go, as it must be approved by votes in the House of Representatives and the Senate. The senators insist, however, that it is more necessary than ever that it be considered, as the law would give freedom to the states and to individuals, and provide relief to those who have been fighting for a solution for so long. The latest public surveys reflect support for eliminating prohibition, confirming that they are not mistaken.

Since it was presented early in the month in Congress the bill has also received significant political support. Last Tuesday, to go no further, representatives Steve Cohen (Tennessee) and Don Young (Alaska) presented another bill, HR 1538, which complements the proposal introduced by Senators Cory Booker, Rand Paul and Kristen Gillibrand. Together these two legislative initiatives represent a plan to reform the policies of the federal government with regards to cannabis, and for it to be demonstrated that it is a viable and effective medicine.

Unfortunately, the legislators will have a tough time convincing Speaker of the House Republican John Boehner to schedule a vote. But even President Obama himself has expressed optimism with regards to the future of these negotiations. In an interview with VICE magazine, Obama seized the opportunity to address the subject in depth, predicting that Congress could soon be forced to re-examine its cannabis prohibition policies. He stated that, as the trend towards legalisation at the state level continues, if both parties continue to moving together in the same direction, “people in the Capitol will have no choice but to make important adjustments to the law.”