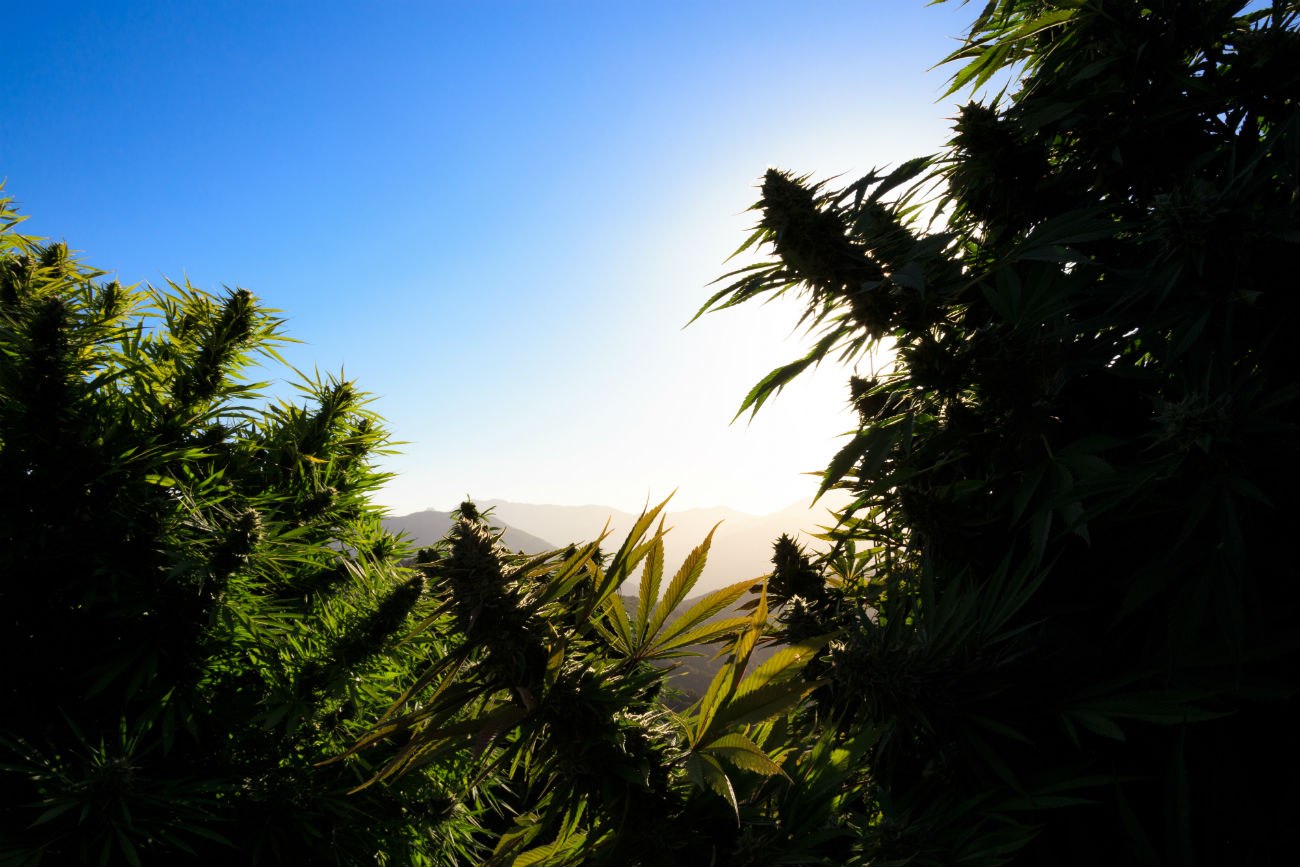 Because of this prohibitionist approach, it is difficult to know how things went exactly. Our sources of information consist of articles written at the time and of testimonies from cannabists who saw it all first hand, but as they had to operate underground, there are differing accounts for the origins of some of the most legendary strains.

In fact, only those who were brave enough to lead the revolutionary wave cannabis hybrids represented know what happened exactly. People who defied the status quo in order to accomplish their dreams, a dream that arose from another dream in 1960's California, when the hippie movement, rock music, LSD and free love were at the peak of their success.

The inception: Cannabis as a symbol of counterculture

Drugs, LSD and cannabis in particular, were intrinsically linked to the hippie movement, and were perceived as a tool towards spirituality as well as a means of spreading the message of love and peace. Psychedelia became the standard of the movement and cannabis was the substance that best represented it. At a time when, to say the least, cannabis was considered the source of all evils in the USA, there was more than just getting high to rolling a joint, it was a way of rebelling against the system. 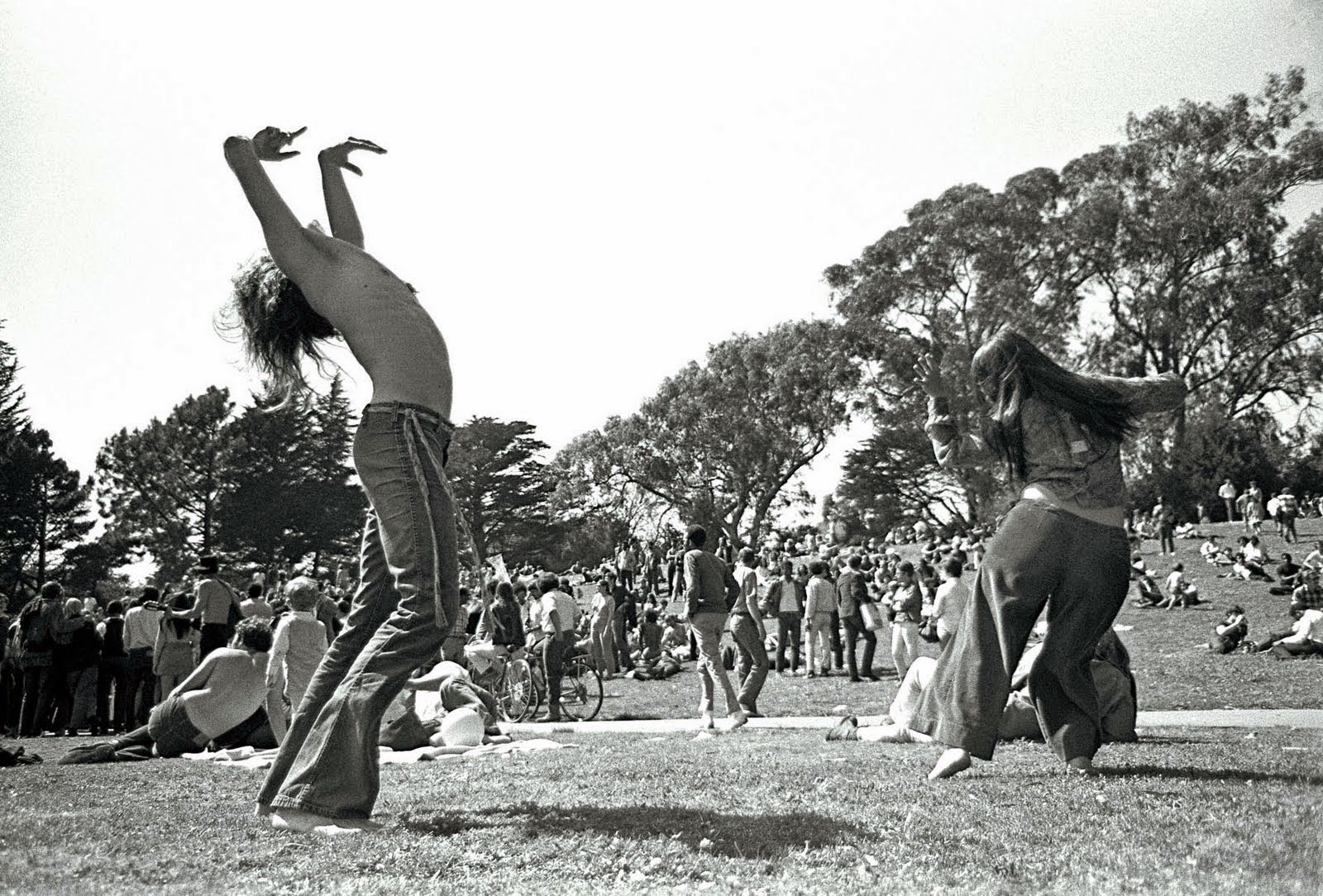 Prohibitionism was enforced with an iron fist, yet the use of cannabis among young Americans rocketed in the 60's. The grass arrived mainly form Mexico and then from Colombia, and with the so-called "bonanza marimbera", tonnes of buds were introduced in the United States despite the efforts of the DEA, Landrace strains such as Punto Rojo and Santa Marta Gold becoming highly popular. Back then, sinsemilla buds were out of the question and, as a result, many growers started to grow the seeds of the sativas that would arrive from their neighbouring countries and that produced an invigorating effect that helped unleash creativity and enjoy psychedelic rock to the fullest.

California, birthplace of the movement, was where the cannabis was grown, particularly in the areas that benefitted from a warmer climate with longer summers. This is how a few pioneers got started in cannabis growing and began to cross-breed different varieties with a view to combining the qualities they appreciated most. This process, led by a group of emerging breeders that were wise enough to realise the endless possibilities of this ancient plant, gave birth to the first cannabis hybrids.

The Californian growers, however, were confronted with a problem: no matter how brightly the shine shone on the West Coast during the summer, those Sativas were used to the ever-present heat of tropical climates and took forever to ripen - most of them weren't ready to harvest until November or December, way too late for the Californian climate.

The hippie trail and the advent of Hash Plants

Luckily for the growers, the "flower power" movement spread beyond America, and the so-called Hippie Trail or Overland became a pilgrimage route followed by hippies from all over the world in search of the "the promised land". As a result, destinations like New Delhi and Katmandu became, and still are, symbols of the movement. Not to mention Goa, were some of the pilgrims took up residence and raised children and grandchildren who still spend long periods in what was considered the Mecca of trance.

Journeys would typically start in Europe's most tolerant cities - London, Amsterdam - and pass through Istanbul, the gateway to the East, from where travellers reached Afghanistan and Pakistan. On their way back from this and other journeys, surfers and dealers such as the gang Brotherhood of Eternal Love would bring with them seeds from exotic varieties gathered in various countries including India, Nepal and Thailand, opening the door to Afghan and Pakistani strains, the fast-flowering indicas that proved to be real game-changers. 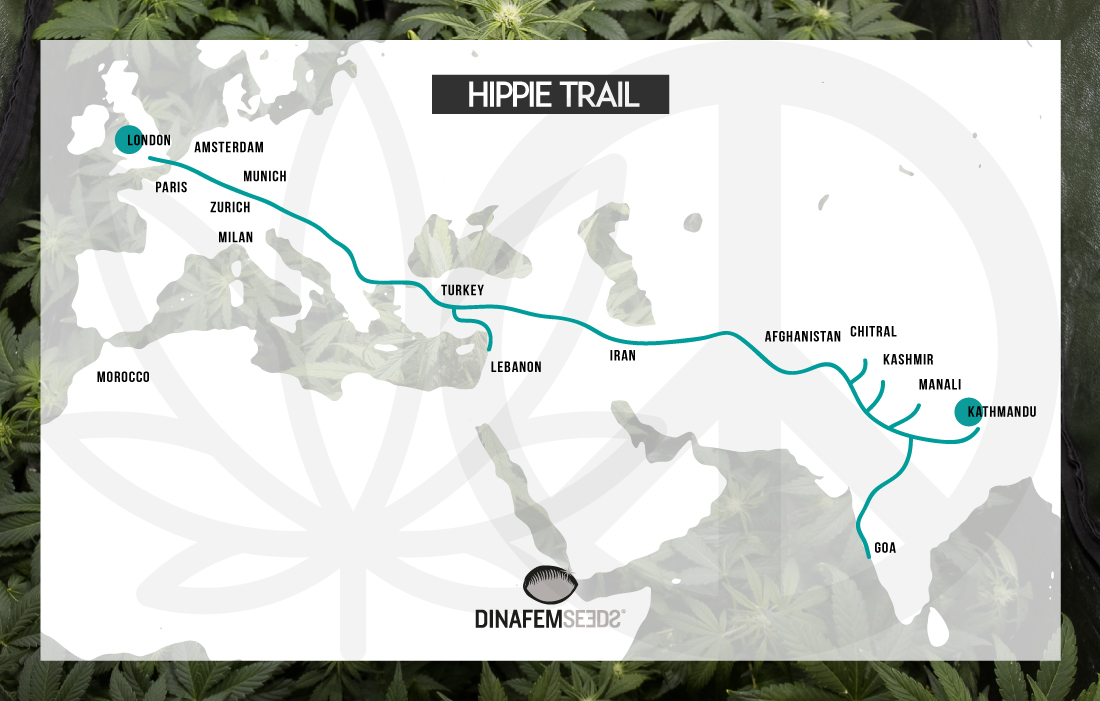 Californian growers were delighted to see that these new strains were ready to harvest in October, the only problem was that their narcotic effect had little to do with the invigorating and creative high they were so fond of. Still, they realised the potential of these new breeds and started to cross them with the sativas they knew so well with a view to combining the flowering period of indicas and the invigorating effect of sativas into a whole new category of strains. A true revolution was about to begin.

The birth of Skunk

Reportedly, in 1969, a certain Jingles, whose identity remains unknown, crossed a Colombian Gold with an Afghan male, a powerful combination that gave birth to one of the first hybrids in the history of cannabis, which was eventually named Skunk because of its pungent aroma.

As mentioned in the introduction, it is difficult to know what happened exactly, as there are differing accounts about how the Skunk was created and stabilised. That said, the most widely accepted version is the one concerning a collective called Sacred Seeds, a select group of growers based on the hills surrounding the San Francisco Bay Area.

Although it eventually expanded, the core of the group was said to consist of six growers, among which Sam The Skunkman, Mendocino Joe and Maple Leaf Wilson. The collective had a clear objective: developing and stabilising the Skunk without compromising its genetic wealth.

With this aim in mind, the growers from Sacred Seeds set about their work, embarking on a monumental breeding process that would last for years and that involved thousands of seed plantings and dozens of selections.

The crew improved and shaped the genetics generation after generation, making it more resistant to the fungus botrytis, a common pest of indicas not only because they were used to much dryer climates, but also because the densely packed structure of their buds made for a perfect breeding ground for the fungus.

This historic hybrid represented a breakthrough because it brought together the best of two worlds but, above all, because it was stable. Its moderate height, its potency and its early flowering won over most growers, who used the stable, mighty breed for creating of many of the hybrids that are now commercially available.

The landscape was changing, something big was coming, you could feel it in the air. And then 1974 saw the foundation of High Times, the magazine that became the bible of growers. This might seem a bit over the top in a world like today's where information is available at the touch of a button, but back then most cannabis enthusiasts perceived the publication as some sort of oasis in the desert.

When asked about it, however, Sam The Skunkman says the stabilisation of Skunk was not a group project and takes all the credit for the breeding process. Some go even further and argue that the man behind the alias Jingles was actually him, to whom they attribute the creation of Skunk.

This historic hybrid represented a breakthrough because it brought together the best of two worlds but, above all, because it was stable

In any event, Sam the Skunkman is more than a well-deserved nickname, and when in 1981 Sacred Seeds announced that they had put together a sale catalogue of 28 strains sorted by ripening date, their cannabis seeds sold like hot cakes, with Skunk#1 and Skunk#2 emerging as the most popular choices probably because they were ready in October.

The Haze brothers and the old-school Sativas

While the advent of indicas was a turning point for many growers, others stayed true to their beloved Mexican and Colombian sativas, growing them in greenhouses and selecting the fastest ones. Such was the case of the mysterious Haze Brothers. Known as R.L and G and based in the town of Corralitos in Santa Cruz, California, they spent the period between 1970 and 1975 growing legendary sativas from seeds imported from Colombia, Mexico, Thailand and South India, after which they selected the individuals with the most desirable traits for crossing purposes. This resulted in Original Haze, a lineage that allowed the creation of legendary breeds such as Super Silver Haze and Jack Herer.

Original Haze is a pure sativa hybrid obtained by crossing a selection of superb females with different imported males: the first year with Colombian and Mexican hybrids, the second year with a male from South India and the third year with a Thai strain.

It must be pointed out, however, that even if the Haze Brothers were excellent growers, they didn't engage in breeding proper. The task of creating a consistent Original Haze lineage fell to a friend and neighbour - none other than Sam The Skunkman - who was allowed to grow two seeds and to use the name "Original Haze".

Sam The Skunkman, however, didn't work much on Original Haze while he was in California. Back then he was probably putting all his energy into the stabilisation of Skunk, so his work with Original Haze was preservation rather than breeding. Once in the Netherlands, however, he did resume the work started by the Haze Brothers.

The dismantling of Sacred Seeds: from California to old Europe

If there was a turning point in this story, it was the raid on Sacred Seeds. It is remarkable how unpredictable the butterfly effect can be: when the police burst into the warehouse of Sacred Seeds, little did they know that they were about to cause the dispersal of cannabis hybrids all over the world.

The raid on Sacred Seeds in 1982 resulted in the arrest of Sam The Skunkman as well as in the closure of the store. The group, however, was not caught unawares, and with the help of their lawyers, Sam The Skunkman was released in a matter of hours.

Legend has it that the police didn't have the sense to seize the plants, seeds and electrical equipment during the raid, but sealed off the premises instead, allowing Sam The Skunkman and his crew to get back the fruit of their hard work. Skunk#1, among other genetics, was no longer in danger.

Sam was prosecuted and, after serving less than a year in prison, he moved to the Netherlands, taking with him the seeds of the varieties on which he had worked for over ten years. This opened up a whole new era for cannabis breeding and brought with it the creation of the first big hybrid strains, which were developed under the umbrella of the progressive Dutch legal framework. Stay tuned for the next chapter of the great history of cannabis hybrids.