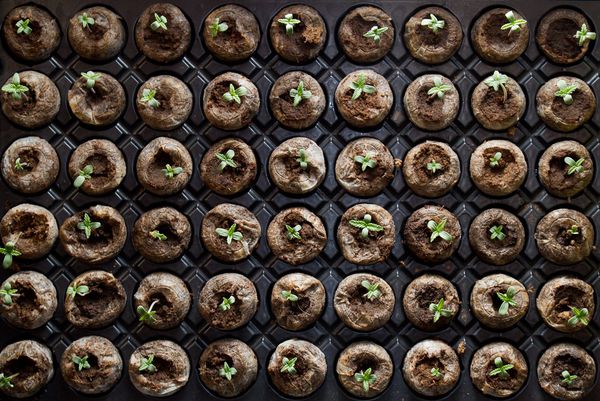 Despite the poor performance of primitive strains, their genetic wealth was vital for the creation of modern hybrids. This is why it's so important that breeders have access to a large gene pool. After all, modern cannabis strains are non other than genetic recombinations, i.e. crosses involving different strains.

Why are hybrids created?

Hybrids, which result from the cross between two cannabis varieties, are new strains with unique traits that didn't exist prior to the cross and that are desirable for some reason, bringing new flavours, effects and morphologies to the large family tree of cannabis. The possibilities are endless!

Modern hybrids are the product of a lengthy, arduous breeding and selection process carried out by breeders in the cannabis industry, the result of which is a new strain with different or improved traits. Put another way, hybrids are a means of improving or accentuating the traits cannabis is appreciated for, that is the flavour, the effect, the duration, the adaptability to the environment, the life cycle and so forth.

How are hybrids made?

Creating a hybrid is pretty simple, you just have to cross two strains together. So if, for instance, you pollinate an OG Kush with a Blueberry, the result or offspring will be a Blue Kush. The whole process can be summarised in one sentence: hybridization is the process of crossing two varieties with unique traits together in order to obtain a completely new strain.

Things get a bit trickier though if the aim is to create a very stable genetic line where all offspring individuals exhibit certain specific traits. It is here that the role of breeders comes into play, who after lots of selection work, obtain strains whose progeny exhibits the desirable traits in a very high proportion and is therefore very stable. 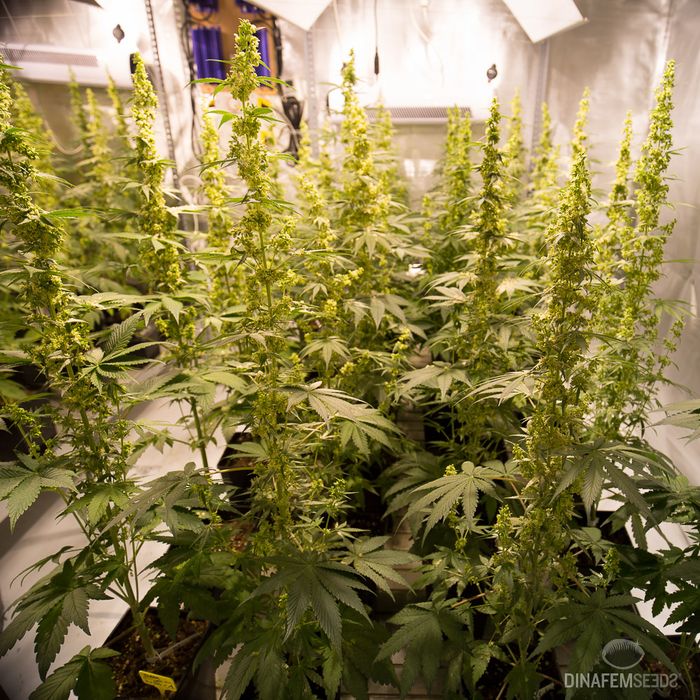 Before moving on to how hybrids are stabilised and other related issues, you need to be familiar with some of the terms involved in the process. We already explained some of them in a previous chapter - "Basic cannabis genetics" - but here is a quick recap to jog your memory:

F1: It is the first generation of individuals resulting from the cross between two parent plants.

F2: It is the second generation, the progeny of two F1 individuals.

Gene: All forms of life consist of a genetic pattern, you can think of it as the sides of a zip, one inherited from the mother and one from the father. Each gene occupies a place in this genetic 'chain' and encodes a specific trait. Put simply, the DNA of a cannabis plant contains a gene determining the colour of the leaves, another one determining the shape of the stem, and so forth.

Allele: Genes are made of two alleles, one inherited from the mother and one form the father. Generally, they are transcribed using letters, in such a way that the gene encoding purple colour, for instance, could be expressed as PP (where each 'P' stands for an allele). Dominant alleles are represented by a capital letter and recessive alleles by a lower case.

Homozygosity: Genes are said to be homozygous when both alleles are identical. Applied to cannabis, when this happens the plant is homozygous for the trait encoded by that specific gene, which results in stability, e.g. if a plant's buds golden colour is encoded by a homozygous gene, the buds will invariably be golden.

Heterozygosity: It occurs when a gene contains two different alleles. Cannabis plants are said to be heterozygous for a given trait when the alleles of the gene encoding it are different.

Genotype: Also known as genome, it is the genetic constitution of an organism.

Phenotype: It is the visible expression of the genotype, that is the set of physiological and morphological characteristics of an individual, which result from the interaction of its genotype with the environment. It can be summarised by the following formula:

Dominance: This is a phenomenon whereby one of the alleles of a gene masks the other. A gene or allele is said to be dominant when it is expressed in the phenotype even if it has been inherited only from one of the parents. Dominant genes are generally represented by a capital letter.

Example: If one of the parent plants passes on allele 'P' (dominant for purple leaves) to the progeny and the other one, let's say, allele 'g' (non-dominant or recessive for green leaves), the result will be a gene expressed as 'Pg' that will invariably produce purple leaves in the offspring, as the dominant allele always prevails.

Recessive: Recessive alleles control traits that are expressed in offspring only when the gene is homozygous. These are generally represented by a lower case. Going back to the example above, both alleles would have to be recessive ('gg') for green colour ('g') to be expressed in the phenotype.

What is genetic stability?

As pointed out above, hybrid marijuana plants are relatively easy to create, you just have to cross to different strains together. That said, creating a marketable hybrid is not quite as simple, since this requires a good degree of stability.

The more stable a strain is, the lower the degree of genetic variability and the greater the predictability of the offspring. In order to increase stability, it is necessary to eliminate undesirable recessive genes, that is the ones encoding the traits we don't want to see in the phenotype of future generations.

Why should hybrids be stable?

Whenever a seed bank markets a new strain, it is actually a new hybrid they are marketing. In that regard, stability is important because it ensures the result is as expected by the customer.

From a Moby Dick, for instance, one would expect certain characteristics such as high yields, a short flowering period, bulky, heavy buds and the like, but if Dinafem's breeders hadn't carried out extensive breeding work to stabilise the strain before marketing it, there would be no way of guaranteeing such traits are actually there.

In other words, genetic stability is important because it is the only way of ensuring the client will get the expected result.

How are hybrids stabilised?

Breeders increase the stability of hybrids by means of selection and breeding. As explained in a previous post, the work of breeders consists of fixing the desirable traits and eliminating the undesirable ones.

Selection and breeding allow to narrow the genetic pool, increasing the level of homozygosity. Ultimately, it all comes down to eliminating the undesirable recessive genes so that they are not expressed in future generations.

Let's take an example. If a breeder wants the leaves of his new strain to be purple, he will have to eliminate all recessive genes for green leaves, otherwise chances are that green will eventually manifest itself in some offspring individuals.

Stability increases with homozygosity, as in the absence of recessive genes encoding an undesirable trait, the predictability of the offspring increases too.

How to tell what's in a plant's genotype

Describing the phenotype of a plant is pretty simple, you just have to observe it, smell it and taste its fruit in order to define the traits that characterise it - e.g. fruity aroma, sturdy shape, wide leaves. Determining what genes are behind those traits, though, is a whole different story.

Imagine you've just created a new hybrid and want to know what gene encodes the colour of the leaves, as knowing the genetic makeup helps stabilise the strain. Well, in the absence of lab equipment, the best way to work out the genotype of a plant is test cross.

What is test cross?

Test cross is a method that allows breeders to better understand the genotype of the hybrids they create. Let's take an example. Imagine you've just created a purple leaved hybrid and want to fix the trait so that the colour is inherited by the offspring. At this point, you can assume that the gene encoding it will be:

*Where 'P' and 'g' stand for purple and green, respectively.

When it comes to fixing a trait, the best-case scenario is to have a homozygous dominant gen, as this means the trait it encodes is stable - there is no 'masked' recessiveness that can play a bad trick and be expressed in the offspring.

The aim of test cross is to identify which traits are dominant and which are recessive. But before going any further, it is important to note that dominant traits are expressed in most offspring individuals, while recessive traits just in some.

As all the offspring is heterozygous with a dominant allele for purple colour, all the individuals will have purple leaves.

However, if the tested parent plat is heterozygous for colour, the resulting offspring will be as follows:

To recap, here are the ground rules for test cross:

All cannabis plants are compatible with one another - i.e. they can be crossed together and reproduce themselves - and as such they meet the first stage of compatibility. That said, when it comes to breeding marijuana plants, there are different degrees of compatibility, as the concept is closely linked to stability.

The more compatible the parent plants, the more stable will be the progeny. In fact, if both parent plants are homozygous for some given traits, so will be the offspring. If, for instance, two Indica-dominant strains are crossed together, they will share many traits and thus they will be highly compatible, resulting in a highly stable hybrid which won't entail a very long breeding process as there won't be too many recessive genes to eliminate.

Things get more complicated though if an Indica-dominant strain is crossed to a Sativa-dominant one. This time the strains are unlikely to share many traits and the resulting hybrids will be highly heterozygous and thus less stable.

If the strains used for the cross belong to the same "family", compatibility will be very high, producing an offspring with a very limited number of variations. 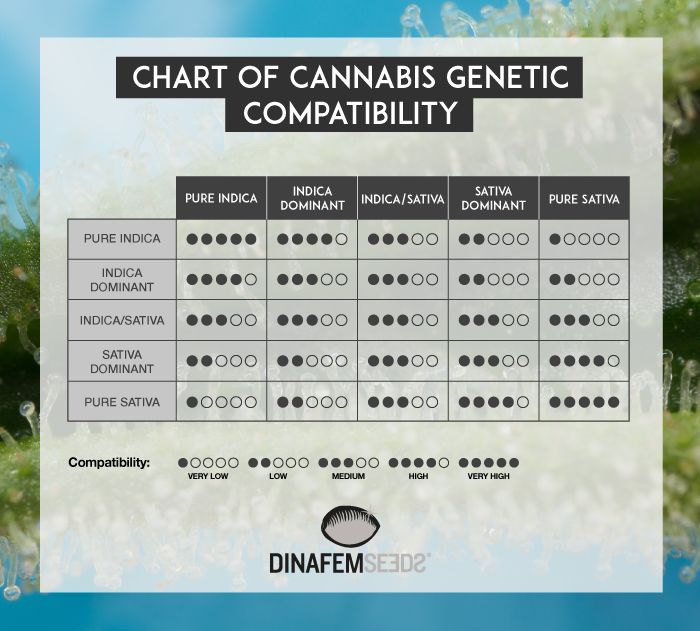