You are an amateur cannabis grower and want to create your own secret garden, a place with the very best grass. However, for this you need seeds, tools ... which you have to get before your opponent does, as his harvest will then be better than yours. But that's not all, as you also have to ventilate your plants, prune them, harvest the crop ... whoever has the best production in the end will be the winner.

We are not talking here about a real challenge, with actual people. For this challenge you only need a table, a few friends, something to snack on, and to smoke ... and GrowerZ, the card game created by Italian Alberto Barbieri, in which you will have to prove that you are the best homegrower of marijuana. They key is not how many buds you are able to produce. Rather, you must meet your character's expectations and deftly handle the daily work. For this you must get your hands on cards with the best tools and the ideal cultivation techniques, or the seeds just right for each season. GrowerZ is a game for 2 to 6 players over the age of 18, with games lasting from 15 to 40 minutes. 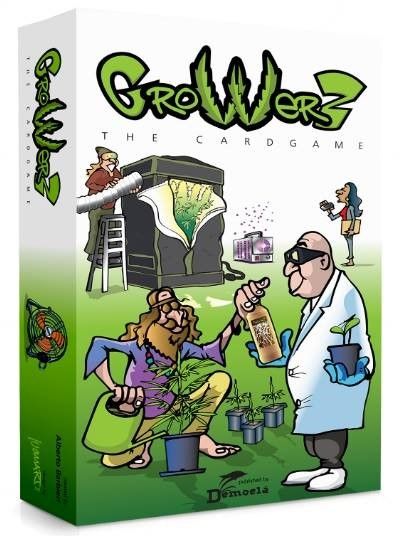 Alberto, its creator, is 32 and lives in Genoa. With some colleagues he has decided to become an entrepreneur, setting up Demoelâ, a game cooperative. Until just a few months ago he had a grow shop, but decided to sell his share to his former partner to begin this new adventure based on his passion for games. The idea of ​​creating a game related to cannabis arose a year ago when he was still running his store. "I was trying to mix my two great passions: homegrowing and playing," he told Dinafem.

The process for creating the game was based "on reality, so we tried to put the players in a natural environment, with their own gardens." "We want to show how normal homegrowing is, and how it impacts society, but not in a negative way," he explains. Thus, the aim of the game is not only to have fun, but also to raise awareness about legalisation in Italy and other countries. To this end, the company has focused on homegrowing, something that Alberto considers essential in this world. 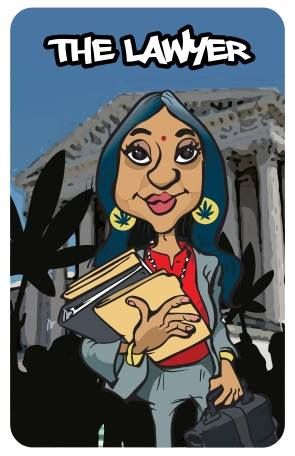 Alberto defines the rules as "simple but stimulating." Each player has a different character, chosen at random or based on his tastes: athlete, artist, chemist, roommates, hippie, and lawyer. Each has a different score with regards to his grass's quantity, quality and effort put in. With the character one gets greenhouse or indoor cabinet growing cards, also with quantity, quality and effort numbers, and a symbol with the type of seed that he can grow with them: autoflowering or feminised. For four turns (corresponding to the four seasons) players choose which cards they want to keep and which they want to discard.

They begin with the winter deck, from which a player draws five cards, on which they will find lights (with the front featuring a yellow background), reflectors (grey), extractors (violet), nutrients (brown) or growing techniques (oranges), accompanied by other characteristics to produce and their corresponding points for quantity, quality and effort. Each player keeps just one of these five cards and places it face down in front of him. When each player has his, they reveal them.

The players group the cards according to their growing areas. If they get a greenhouse or cabinet card they have to create a new space in addition to those they have had since the start of the game. If they get a seed, a growing technique, a tool ... they must put them together with the growing areas they consider most appropriate. But they cannot repeat colours. In a greenhouse they cannot have, for example, two growing techniques, two tools, or two nutrient cards. 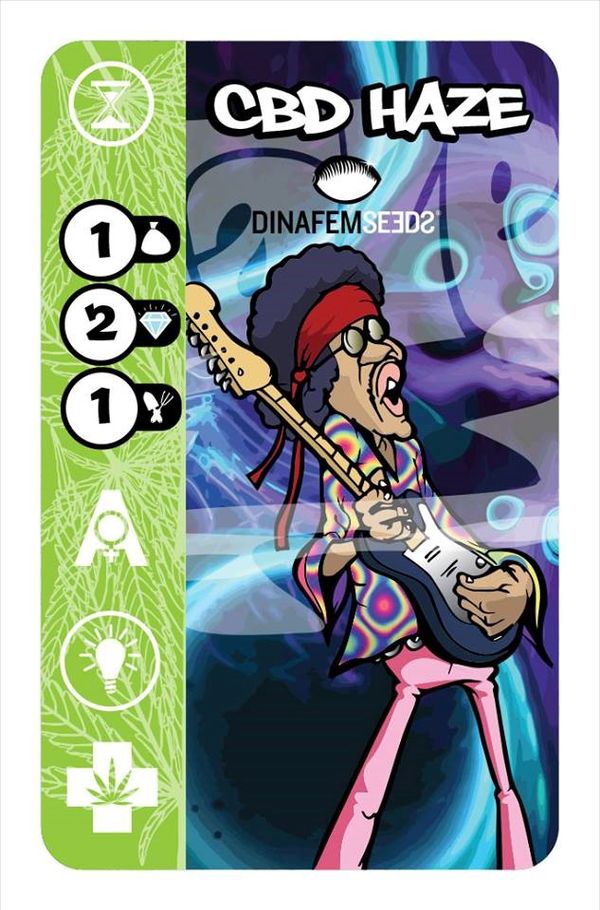 The next step is to decide if you want to plant or not. For this the player must take a card from the deck of seeds (which includes Dinafem's CBD Haze, by the way). Then comes the harvest, which involves adding up points for quantity, quality and effort on every seed planted, along with the techniques and tools used. Finally, players must clean the growing area; that is, eliminate those cards considered temporary (seeds and others that have not been used) and start another turn corresponding to another season. The player who gets up to 15 points will have the best homegrown marijuana, and will win the game.

Although the instructions come in English or Italian (Alberto explains that they are working on a Spanish version, to be distributed in a Creative Commons format), language will not be an obstacle. Everything you need to know to play the game is marked with symbols and numbers, so all kinds of people can play. "It's quite useful when you have multiple markets, to save money on printing, and also for them to understand the game," Alberto said.

When they had finished the prototype Alberto and his colleagues used a focus group at the University of Milan. "We tested the game with several different types of people: users, consumers, but also non-consumers, and we received very interesting feedback from them," he says. The cards were designed by Ivan Art, a veteran artist known for his anti-prohibitionist activism.

The gaming experience is complemented by a free app, so far only available for Android devices. "We developed an application to record the points," Alberto explains. This allows one "to play faster," as it will calculate the totals and final results of each player in each round without having to use a pen and paper.

The game goes on sale on October 1, and Demoelâ will be promoting it at two major events: the Canapa in Mostra fair, in Naples, one of the most important marijuana events in Italy and Europe; and at the Essen International Games Fair (Germany), recognised worldwide within the board game industry for the numerous novelties and prototypes presented there. The game is bound to turn heads at both. "We'll be at Spannabis, for sure," says Alberto, although that will have to wait until 2017. 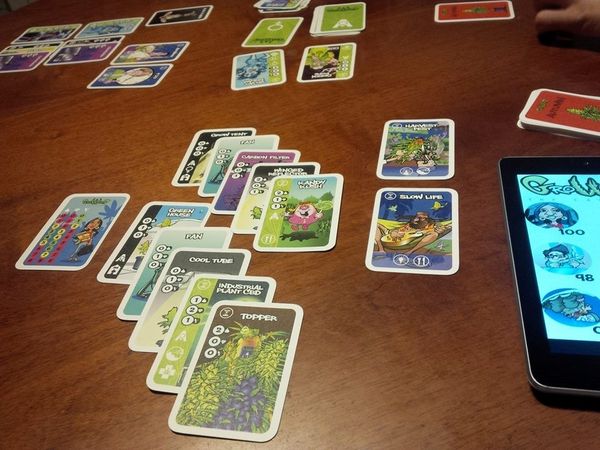 Italy, a country at the forefront of legalisation

The game was created in a country, Italy, which has risen to the European vanguard when it comes to the legalisation of cannabis. A few months ago the president of Tuscany, Enrico Rossi, highlighted the positive aspects of legalisation to end the illegal market, controlled by mafias. Since 2015 there has been a bill in the national Parliament. Though currently blocked, it has the support of over 200 MPs.

If approved, Italy would legalise the personal cultivation and consumption of grass, and also its medical and recreational production. The bill also proposes a state monopoly for the issuance of growing licenses, and the creation of cannabis clubs. If everything goes according to schedule there should be a vote in the coming weeks.

"From what I've seen," says Alberto, "the bill is too ambitious for it to be passed as it stands, but it is very important that the right to homegrowing come first, and be visible. That is what matters to me."

Meanwhile, at Demoelâ they are forging ahead with the promotion of GrowerZ. This year they are working on another two games, so they're pretty busy, but Alberto can already share that they have "a couple of ideas" for new publications related to cannabis. If all goes well they will go on sale next year or the following. They would also like to market an expansion of GrowerZ to multiply the game's potential, with new characters or rules. Now all that remains is for the game to become a hit. Up for a card game?