Cannabis is a flowering plant that, regardless of the variety, reproduces through pollination. This process can be defined as the transfer of pollen between plants, and involves the participation of a number of players. On the one hand, the flower, which produces nutrients that attract pollinating insects and, on the other hand, the pollinating insects - wasps, bees, butterflies, etc. - which feed off the nectar and other parts of the plant, initiating the pollination process.

The legs of the insects get covered in pollen as they feed, and when they change flower to continue the feast, this is transferred from one plant to another in what is called cross-pollination. Airborne and waterborne pollen can also lead to pollination. 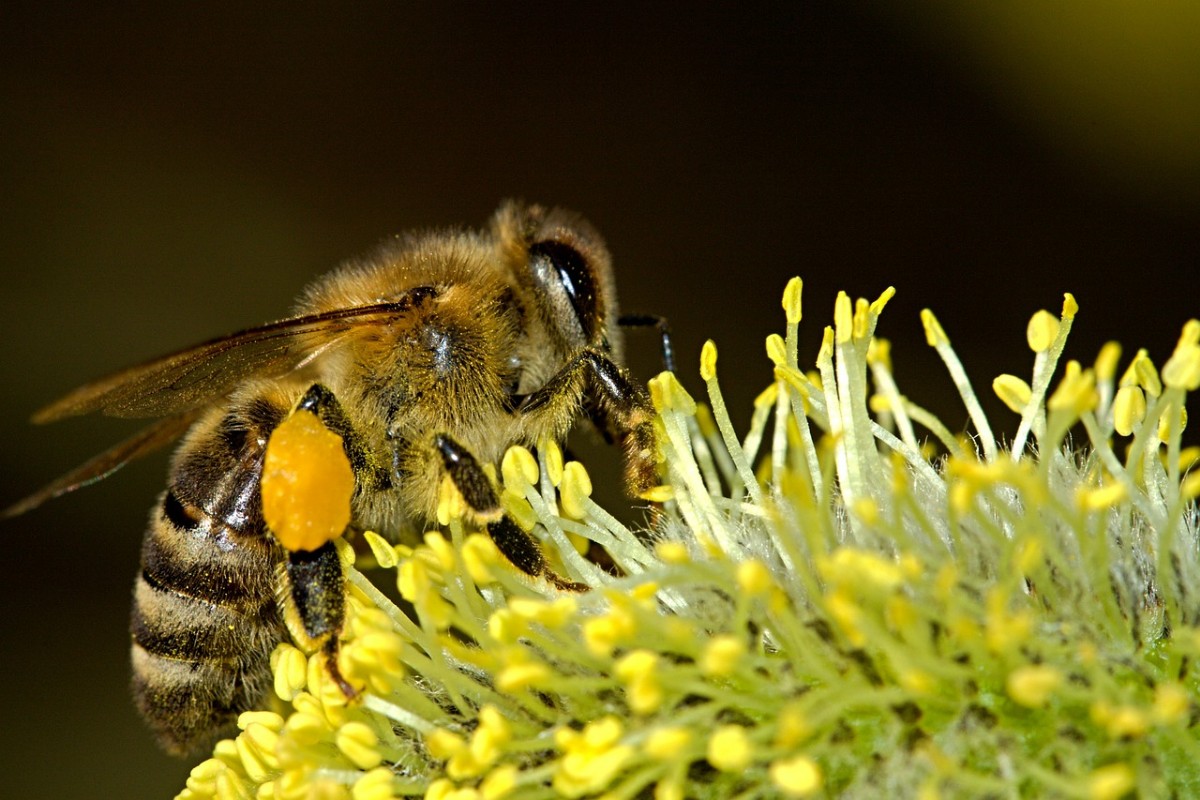 Cannabis is a dioecious plant, meaning it produces both male and female individuals. As described in a previous post, this is most evident in the flowers, which are different depending on the plant's sex. Under certain circumstances, like in situations of high stress, female plants can develop male structures as a means of ensuring gene conservation.

Generally, the therapeutic and recreational uses of cannabis involve female plants, the ones that produce the large, resin-secreting flowers that are grouped into rounded or pointy buds. Males, in turn, produce smaller flowers near the base of the leaves.

Let's have a closer look at the main parts of cannabis buds and their characteristics: 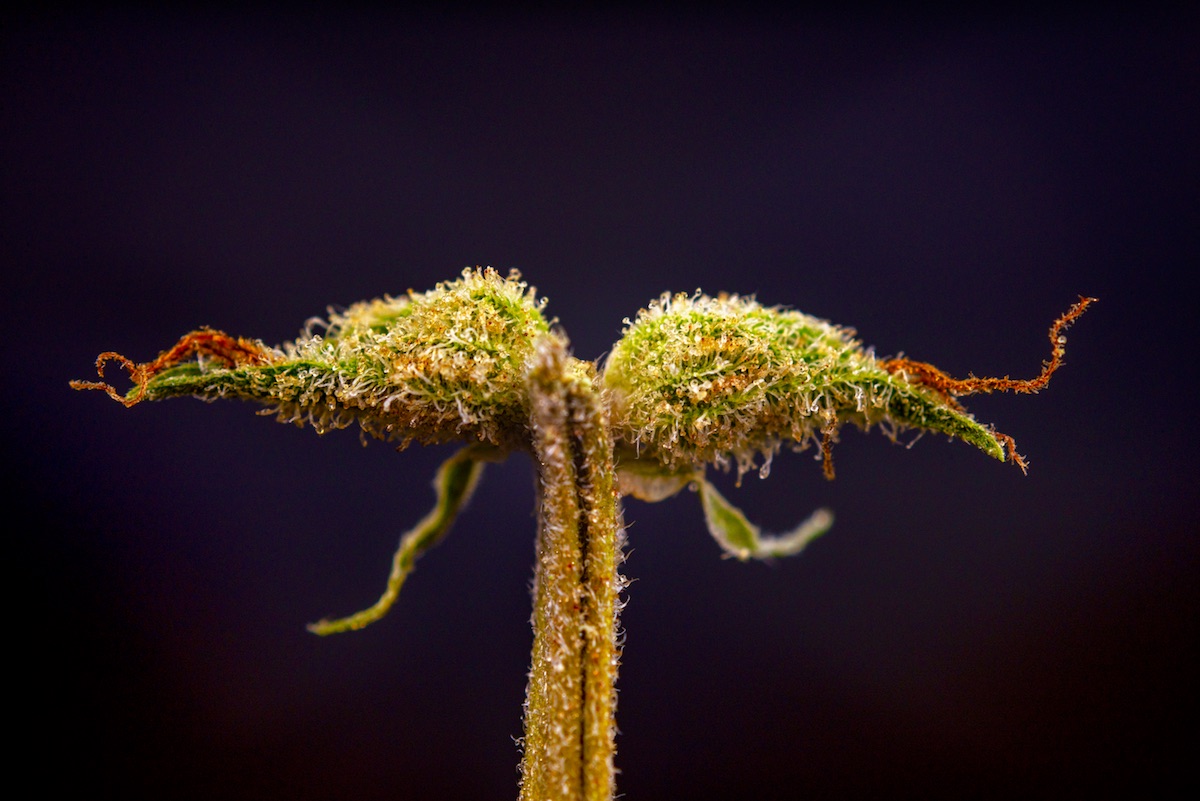 Also known as bract, this tear-shaped organ is responsible for protecting the flowers. Easier to perceive when the buds are well-formed, they are considered specialised leaves that can attract pollinating insects with their colours, which can be as vivid as that of the flowers' petals. Pollination represents a risk to the calyx, as once it occurs, the structure becomes an ovary with the sole task of carrying a seed.

The problem here is that the flowers are not able to realise their full potential, resulting either in compact, overly hard clusters comprised of tiny calyxes - especially in the case of indicas - or in larger calyxes grouped in clusters that are not compact enough - especially in the case of sativas. Rich in trichomes (i.e. resin), THC and other cannabinoids, the calyx is highly appreciated by cannabis users. 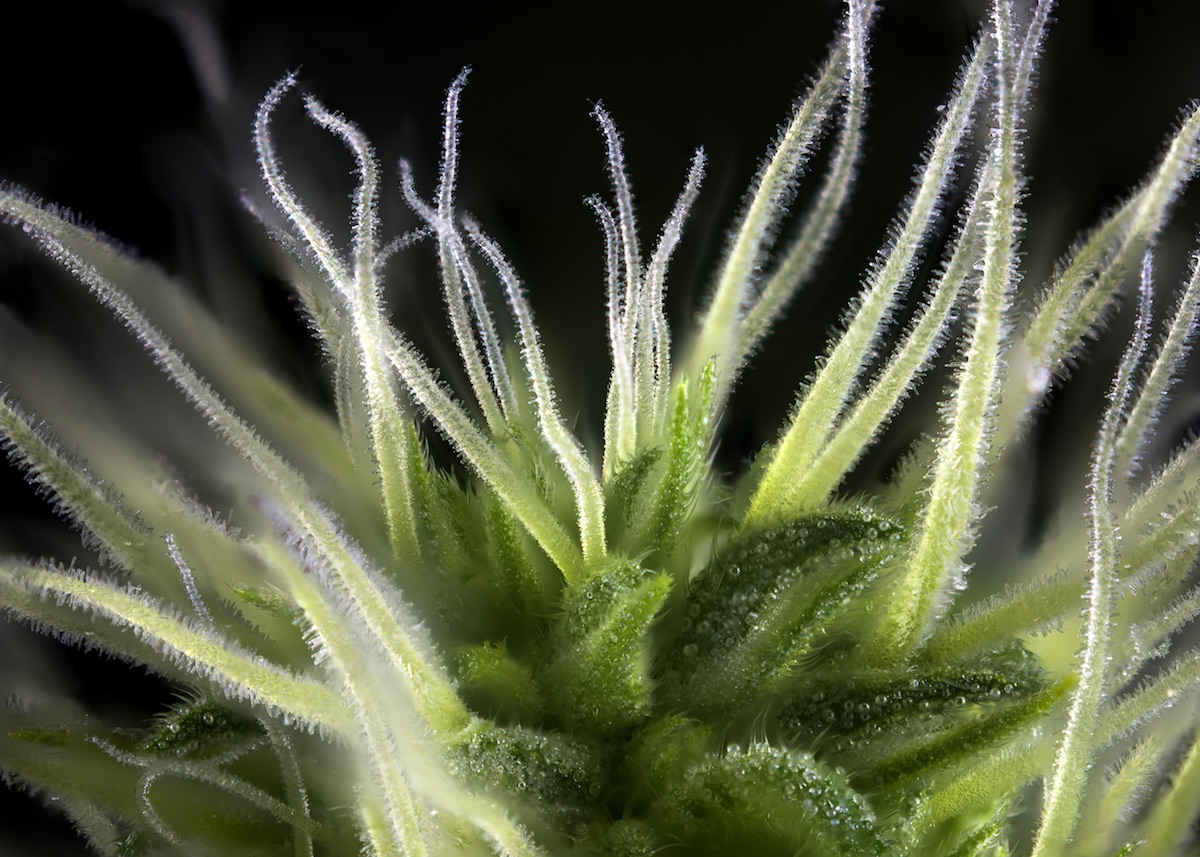 The pistil is the female organ of the flower, and is comprised of the ovary, the style - an extension of the ovary - and the stigmas, the characteristic hair-like strands of the calyx that collect pollen triggering the seed creation process. When they first emerge, stigmas are white and upright, progressively curling into a spiral and darkening to yellow, orange and brown as they mature. The colour, however, depends largely on the variety, with some pistils exhibiting red and pink hues. 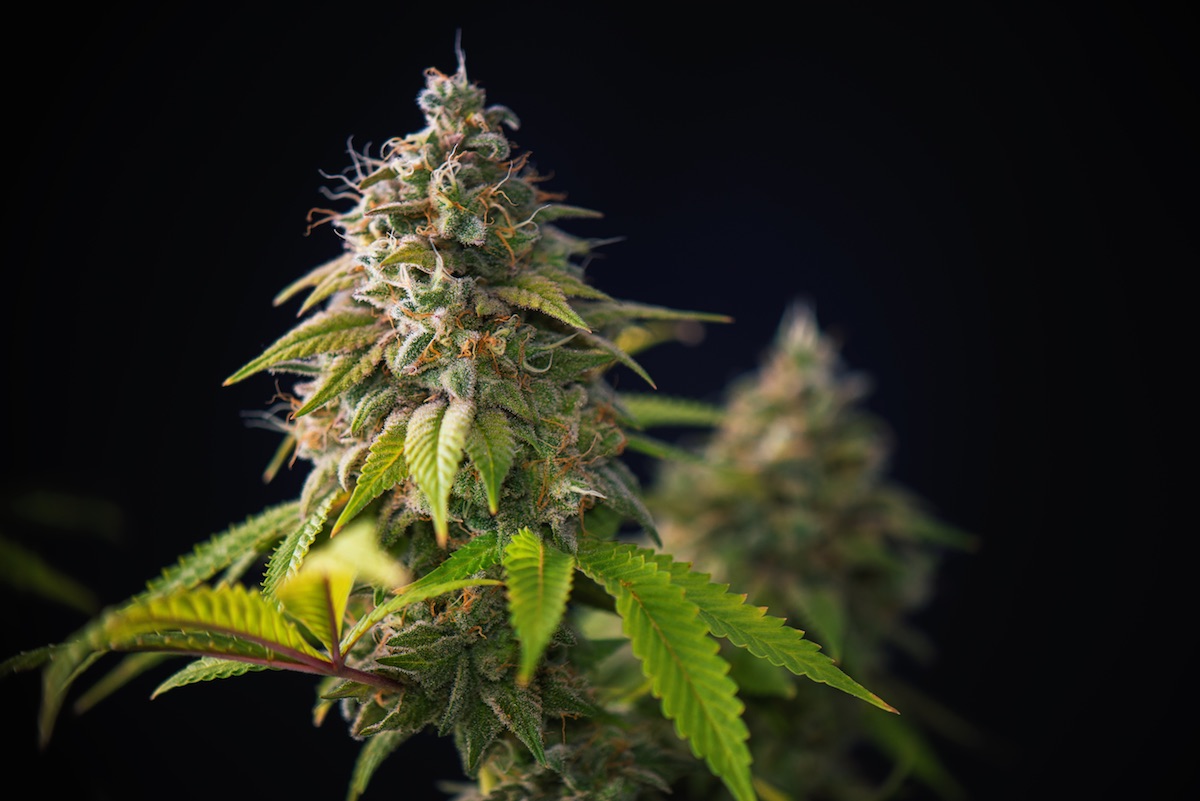 The sites where buds grow forming compact flower clusters are called colas. The main cola, also referred to as apical bud, forms at the top of the plant and is usually the biggest in size. Smaller colas grow from the nodes, partially hidden between the leaves. There are a variety of techniques, though, that allow to increase the number and size of the buds, including LST (Low Stress Training) and SCROG (using a net or mesh). Not all colas mature at the same time. The apical bud, for instance, tends to reach maturity faster aided by its position on the top of the plant, where it benefits from greater light exposure. 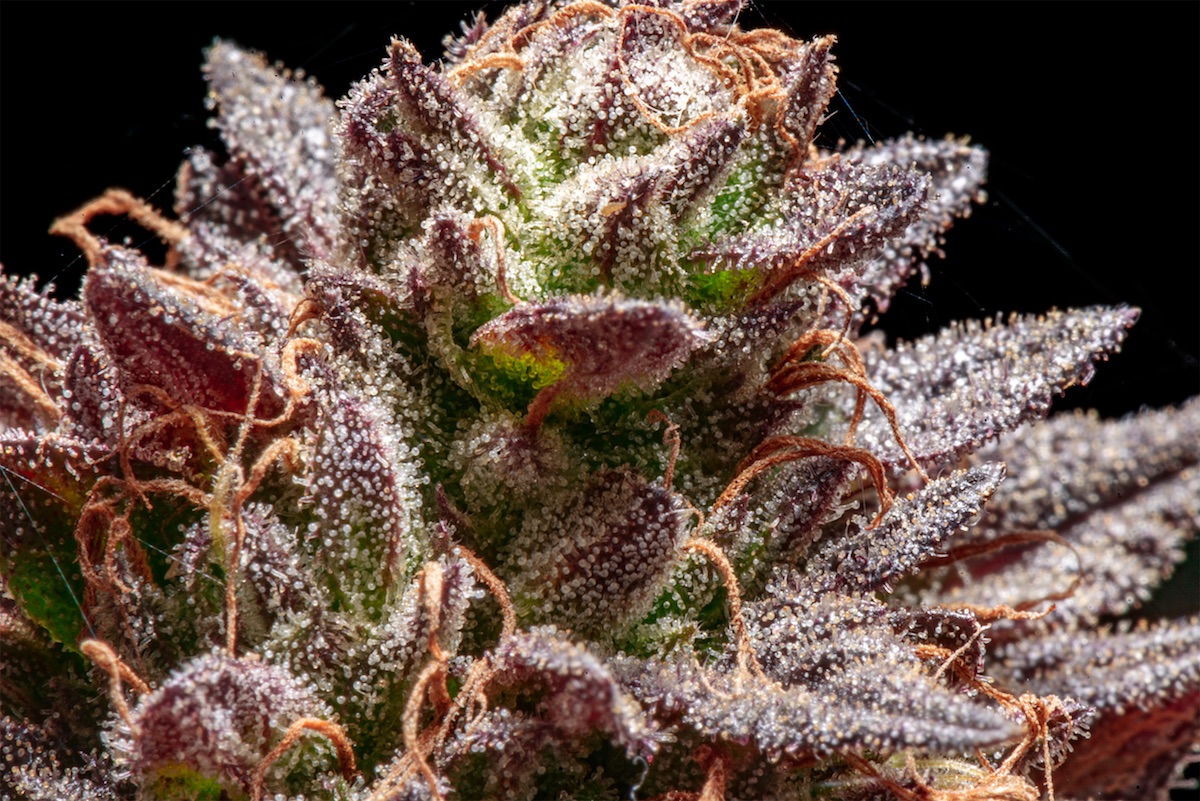 Typical of the buds, sugar leaves are so called because they are covered in a dense, whitish coat of trichomes (resin), as if they had been sprinkled with sugar. Despite their high resin content, sugar leaves are usually discarded before consumption, as they are very sticky and thus difficult to handle. This, coupled with a chlorophyll content that gives them an unpleasant astringent taste, makes them the main target of scissors during trimming. But because they are laden with trichomes, sugar leaves are great for concentrates and hash production. 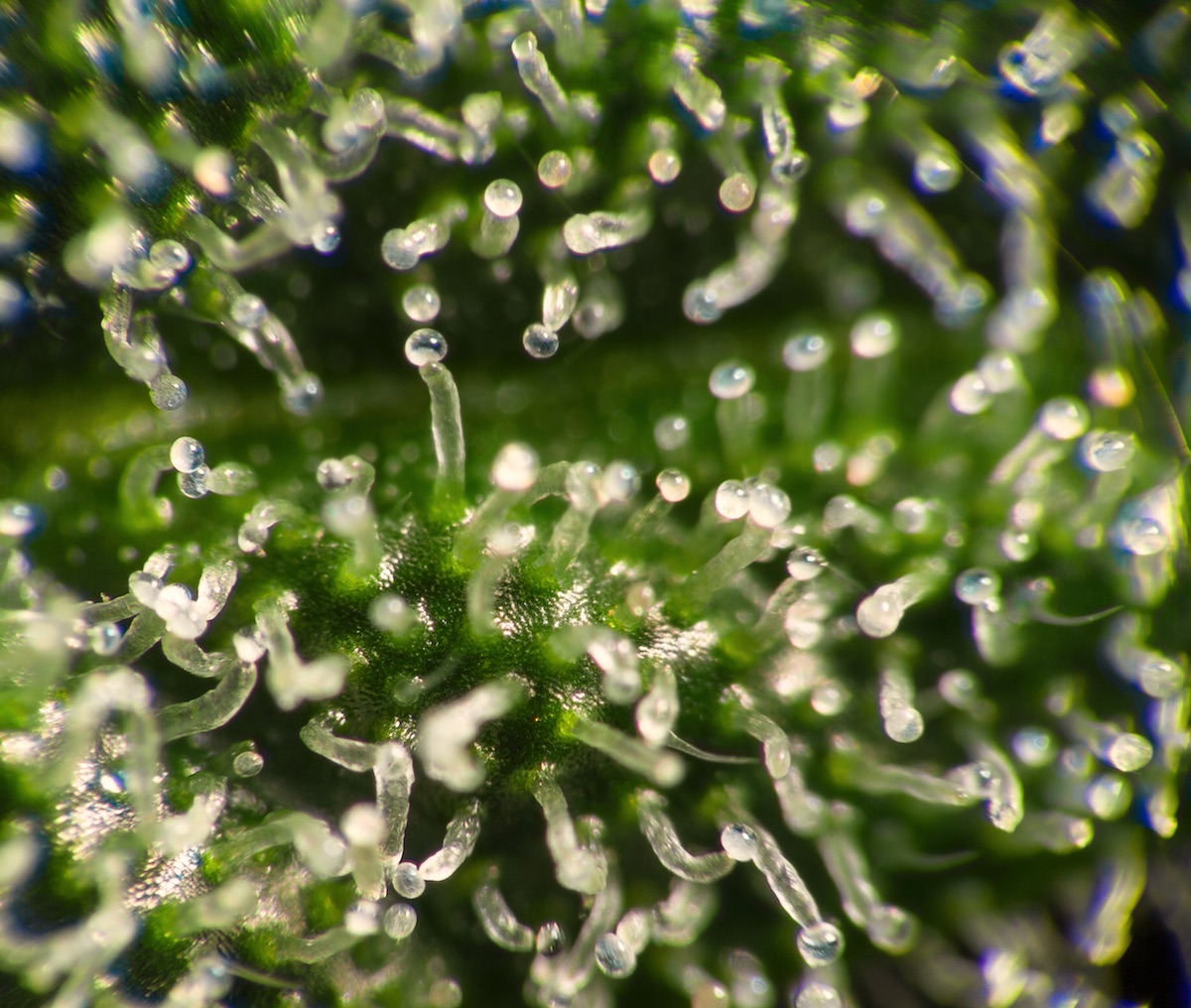 Trichomes are the main compound of the plant's resin and are easily recognisable. To the naked eye, they appear as a powdery layer of white, hair-like strands, while under the microscope or a magnifying glass they look like tiny stems topped by a round sphere. Rich in terpenes and cannabinoids, trichomes start as tiny, light globes that get progressively taller, changing from translucent to amber throughout the maturation process.

The effects of cannabis depend largely on the maturation stage of the trichomes, which can be defined as microscopic cannabinoid factories. Expert growers can tell whether a plant is ready for harvest just by observing the trichomes - harvesting when trichomes are still transparent can compromise potency, as the colour is an indication that cannabinoids are still being produced.

Allowing the trichomes to become amber is also beneficial for the plant's terpenes - the chemicals responsible for the flavour and the aroma of cannabis - and essential oils, all of which peak during this phase. In fact, the flavour and aroma of the buds vary greatly depending on when the plant is harvested. Trichomes that are tightly packed together are a sign of intensely aromatic buds.

There are many other names that allow for a more detailed description of the various parts, chemicals and cells of cannabis buds. This is simply an overview of the main terms that will hopefully provide you with a deeper understanding of basic concepts.