Cannabis has been used by humans since antiquity. During the Neolithic period, it was used as a source of fibre, for the production of foodstuffs, oils and medicinal products and during sacred rituals, having been present in human societies ever since. Accordingly, researchers have always shown interest in understanding its nature, characteristics and properties.

Cannabis enthusiasts, too, can benefit from this knowledge, particularly with regards to the different parts that make up the plant and their specific role.

The taxonomy of cannabis

Cannabis is a dicotyledonous angiosperm plant belonging to the Cannabaceae family, which also comprises hops. According to a recent chemotaxonomic study, the original cannabis strain is native to Central Asia, more specifically to the region extending from the Himalayas to northwest China. Because of its ability to 'escape' from controlled farming areas to the wild, it is considered a semi-domesticated plant. 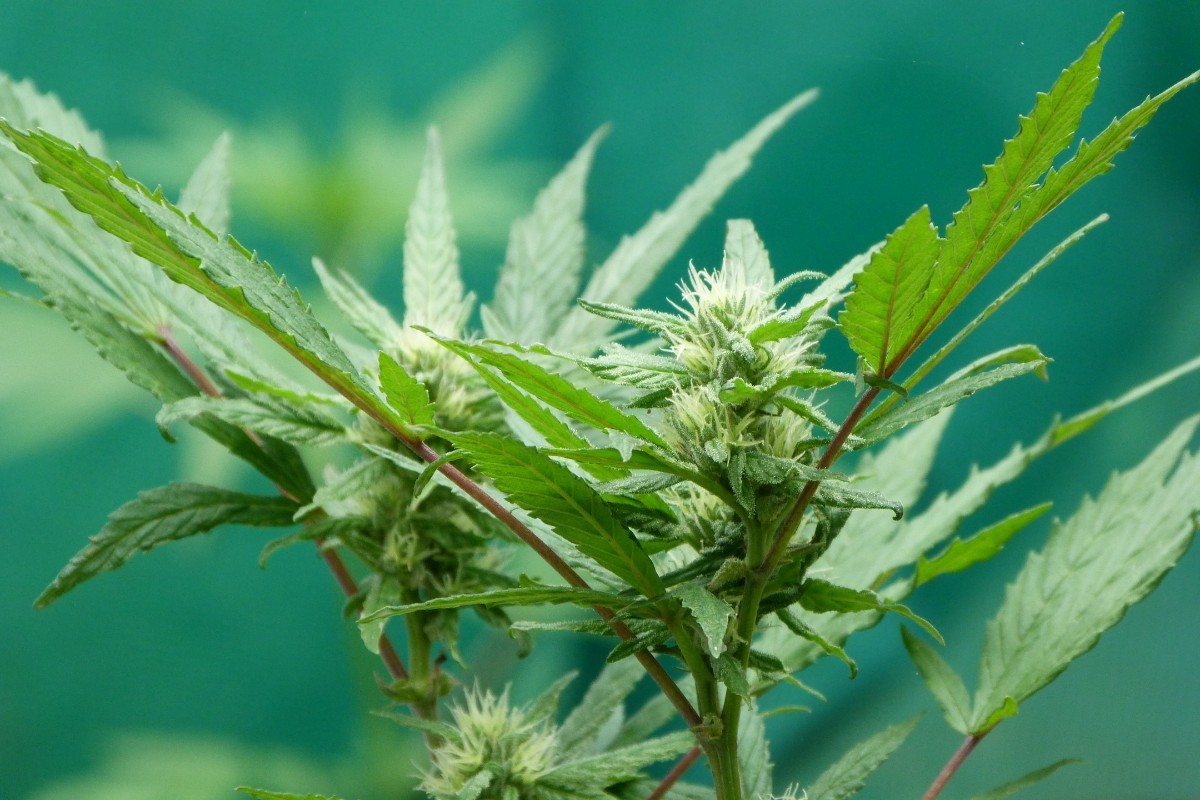 Botanically speaking, cannabis is a dioecious species, meaning it produces both male and female plants. However, there are also cases of hermaphroditic plants with male and female sex organs. These reproduce through self-pollination, forming flowers that contain seeds, and have the ability to pass on their hermaphrodite genes, characteristics that growers find highly annoying. Cannabis has an annual life cycle - it may live for longer in the subtropics and in artificially controlled environments - and nowadays grows virtually everywhere in the world.

Even if the first botanical classifications date back to the 18th century, the taxonomy of cannabis has always been a source of confusion. According to the latest classification, developed by Small and Cronquist, all cannabis strains come from the original species Cannabis sativa. As a result, Cannabis indica has been redefined as a subspecies.

While Cannabis sativa is found mainly in Europe and North America, where it is grown for seeds, oil, paper, cord and fabric, Cannabis indica grows naturally in large areas of the southern hemisphere, where it is used for medicinal purposes rather than for seed and fibre production. 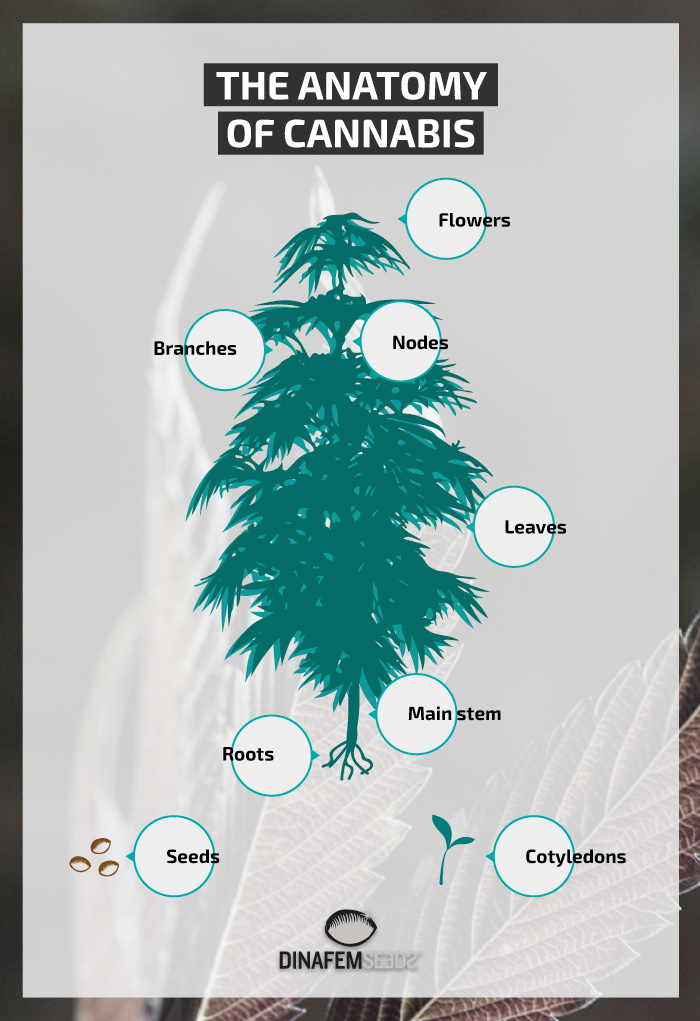 The parts of the plant

Despite the many different cannabis strains, all plants share the same anatomy. Let's have a look at the different parts of a cannabis plant so that you can better understand its behaviour and ensure yourself a successful crop.

While seeds are not a part of the plant as such, they are critical to the survival of the species. Brown in colour, they are produced in the flowers of pollinated female plants. The process starts when the embryo gets big enough so as to cause the seed to crack open, splitting into two lobes that give way to a weak stem. Once in the substrate, this forms a tiny root that gets gradually stronger.

The roots grow below the substrate surface - soil or otherwise - and have various functions, ranging from providing the plant with firmness to absorbing the nutrients necessary for growth. The root system consists of a main root from where many other secondary roots grow, forming a fibrous mass. These are part of the plant's vascular system, which using xylem (the tissue that carries sap), transport water and nutrients up and down the plant.

Embryonic leaves are called cotyledons. These are formed during embryogenesis, together with the stem's and the root's meristems (the plant cells responsible for growth). Cotyledons grow using the energy stored in the seed, and are the first set of leaves to emerge after germination. Their green colour indicates the presence of chlorophyll, which allows these tiny leaves to perform photosynthesis during the first stages of growth. Their life cycle is very short, drying out as soon as the seedling grows its first serrated leaves.

The central stem grows upright from the roots. It allows for vertical growth and is the plant's major vascular tissue, transporting water and minerals from the roots to the leaves and flowers. Under normal conditions, the main stem develops nodes that allow for secondary growth.

A node can be defined as an intersection between the main stem and the branches, or between these and secondary shoots. Cannabis indica plants tend to produce more nodes, and are therefore bushier and less vertical than Cannabis sativa plants, which exhibit a more elongated shape with fewer nodes. 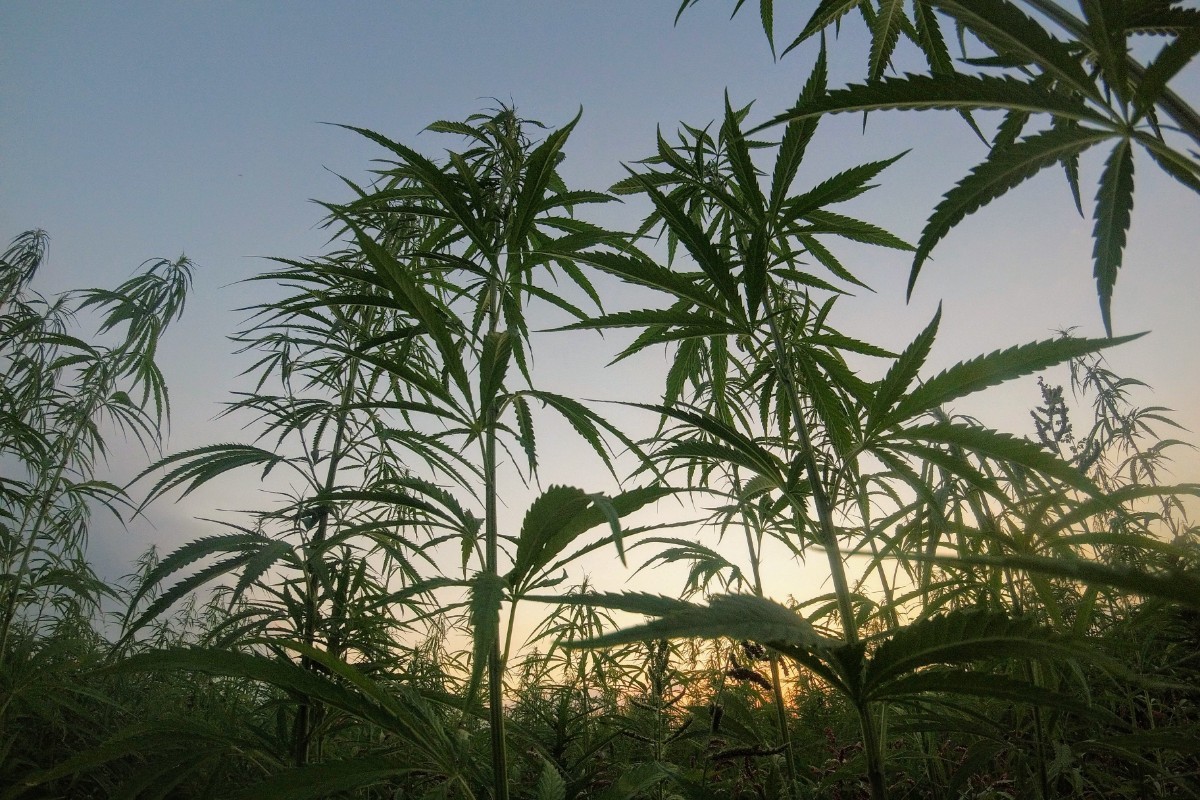 Branching occurs in pairs, at both sides of the stem starting from the nodes. The space separating the branches is called internode or internodal distance. Because they have a larger number of nodes, internodes are shorter in indica strains. Sativas, in turn, produce fewer nodes with longer internodes. That said, hybrid strains or strain with mutations can exhibit growth patterns that vary from branch to branch, resulting in irregular branching. Cannabis plants with mutations, though, can be highly potent and yielding.

Leaves are a vital part of every plant. In the case of cannabis, they tend to be fan-shaped and symmetric, growing in pairs from the main stem and the branches. A good way to differentiate between cannabis strains is to observe the leaves. While indica leaves are dark and large, sativas leaves exhibit lighter, more slender leaflets (each of the structures that make a compound leave). Hybrid leaves are a combination of both.

It is through the leaves that plants absorb the light available in the atmosphere. Internally, the phloem (conducting tissue) transports energy from the leaves to other parts of the plant, just as an electrical wiring system would. 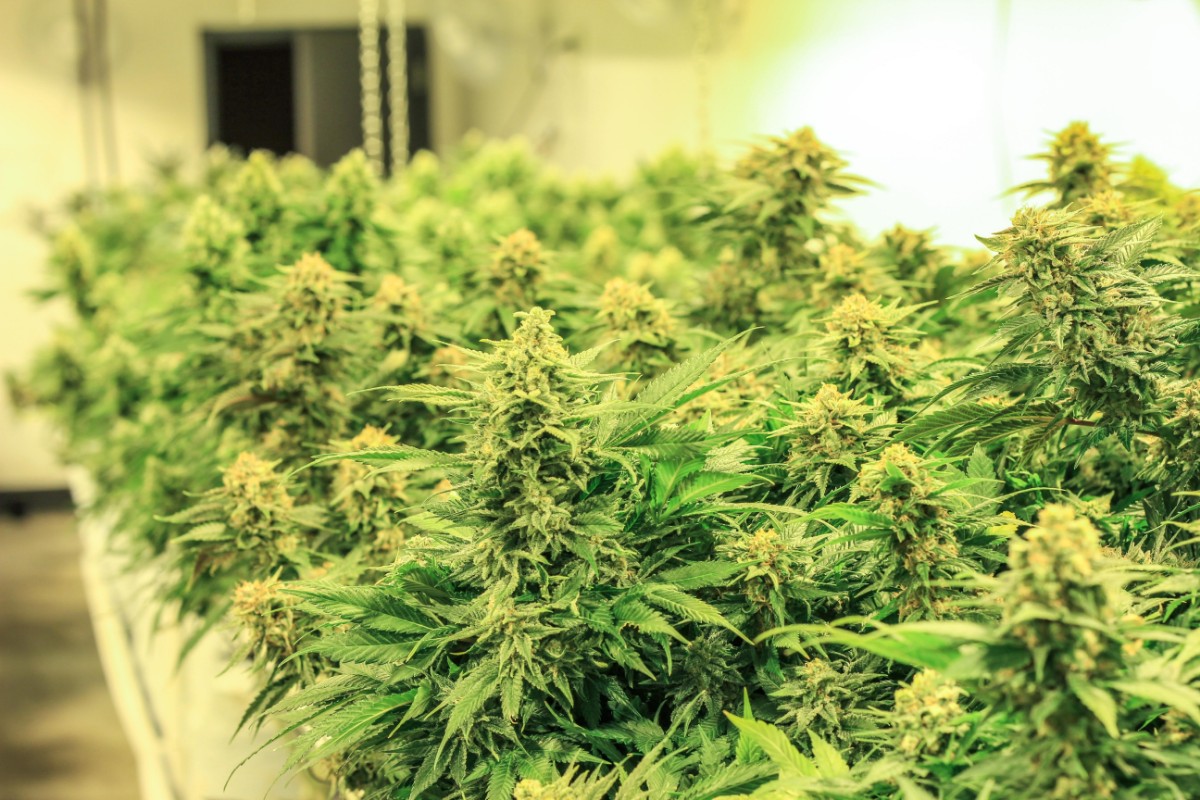 Prior to flower formation, plants develop floral primordiums at the point where the branches join the stems. These formations, also known as preflowers, vary according to plant gender. Female plants produce a tiny, pear-shaped structure known as the calyx that is made up of pistils. These contain two hair-like stigmas that are connected to the ovaries of the flower, which are generally white in colour.

Designed to contain the pollen grains, the calyx of male flowers is formed by five sepals that support the petals, containing no stigmas. As flowering progresses, male flowers form hanging clusters, while female flowers are grouped into the plant's buds and colas.

On the next post, we'll look at the specific parts of cannabis buds. Keep tuned!