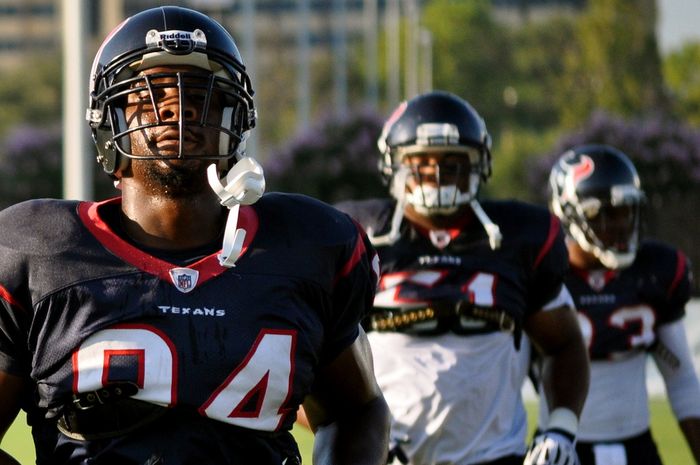 Because of the aggressive tackling and physical contact it involves, American football is one of the toughest sports to play. A recent study that analysed the brain from deceased NFL players found chronic traumatic encephalopathy - a degenerative disease affecting many former players as a result of the repeated blows to the head suffered during their career - in 110 out of the 111 brains examined, confirming the link between American football and brain injury.

But the blows are not limited to the head. According to a survey by SimpleTherapy, in 2013-2014 alone NLF players had more than 1,300 injuries, no part of the body escaping the risk of injury. The most frequently affected area is the knee (22%), followed by the ankle (15%), the upper leg (12%) and the shoulder (9%). The consequences of an injury don't vanish the day after the game and many players have to deal deal with constant pain throughout the whole season, as a result of which they turn to dangerous self-medication methods.

Accused of failing to protect the long-term welfare of players and of trying to cover up the harmful effects of certain injuries and tackles, the NFL may have felt pressured to take a step towards the acceptance of medical cannabis as a legitimate option for pain management. In the opposite direction, the NBA, for instance, stands firm in its prohibitionist approach and keeps sanctioning the use of cannabis, giving way to a situation that, in a country where the legal status of cannabis varies from state to state, is unfair for many players.

As a result, players playing in California, Colorado or Oregon - where cannabis use has been decriminalised - can still face fines or a suspension period of several months from the league if caught with traces of THC in routine tests - which, for the record, is not the case with alcohol. One of the most high-profile cases is that of NFL player Josh Gordon, who was sentenced to a year's suspension following a positive for marijuana in 2015, while colleague Ray Rice was banned just for two games for domestic violence. A disproportionate measure that mobilised public opinion against the NFL, who ended up reducing Gordon's suspension period and extending Rice's.

Anyhow, this step forward is not only attributable to a thirst for justice and for the normalisation of cannabis use, which many US states are achieving by legal and social means, but also to the medical benefits cannabis can bring to players, a major asset for a sport that causes chronic ailments and that is marred by a strong addiction to opioids and other pain management pills - which are definitely more damaging than cannabis in the long run.

The NFL has responded positively to the proposals of the Players Association and has accepted to team up to study the potential use of cannabis for medical rehabilitation. Chief among the reasons for these turn of events is the current opioid crisis in the US, which is reaching epidemic proportions with a worrying addiction to methadone, codeine, morphine and the like, treatment options that are often prescribed by NFL doctors themselves.

As a result, many former players have developed an addiction to these anti-inflammatory drugs and narcotics, to which they have had unlimited access for years. One of the factors underlying this situation is thought to be the pharmaceutical industry, whom many accuse of hindering cannabis legalisation in sport to serve their own interests.

Meanwhile, there is evidence supporting that these prescription drugs have contributed to opioid abuse among players. According to a study by the University of Washington, 7 out of 10 former players that had used opioids during their career misused them at some point in their post-athlete life, while 63 percent reported obtaining their pills from a source other than a doctor, among which teammates, the coach, friends and the Internet. 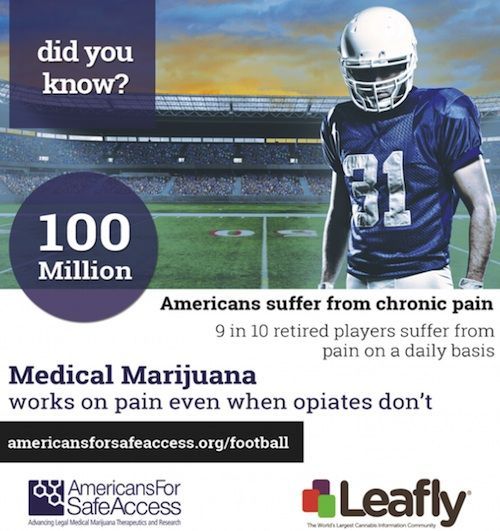 These worrying figures put the NFL in a compromising position, as while players are told not to use illegal drugs, the league looks the other way when its coaches and sports doctors hand out painkillers like candy. Clearly, something doesn't add up in the image the NFL is portraying.

This is precisely the reason why many NFL doctors are opening up to new treatments that are less addictive and harmful. "Certainly the research about marijuana and really more particularly cannabinoid compounds as they may relate to the treatment of both acute and chronic pain, that is an area of research that we need a lot more information on and we need to further develop," said Allen Sills, NFL's chief medical officer.

A key step to win the game

Research shows that cannabis can reduce brain injury and is a safe, non-addictive alternative to opioids in pain management. Further, it can help to control alcohol abuse and violent behaviour, which are common effects of the repeated concussions suffered by NFL players. Accordingly, cannabis and its neuroprotective, analgesic and anti-inflammatory properties emerge as a custom-made remedy for a sport where brain and body trauma are the daily bread. 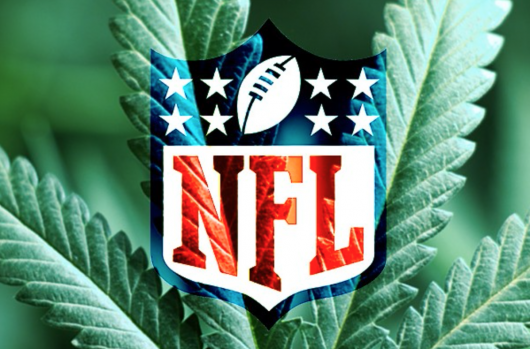 At this point, there is little doubt that players need pain treatment both during their career and after retirement. Some former players such as Jim Plunkett show distress when questioned. "My life sucks, it's no fun being in this body right now. Everything hurts," said a 69-year-old Plunkett. Meanwhile, other former players have reported using medical cannabis throughout their whole career, stressing that it is far more common than people think, an open secret that more often than not has been ignored rather than addressed.

Hence the importance of the step taken by the NFL, who in a better-late-than-never approach seems to be finally siding with the health of players. While the opioid crisis is certainly one of the major causes behind this new interest in research, which has in turn opened the door to the use of cannabis in sport, we cannot ignore the fact that a powerful social movement is sweeping across the US, wiping out the stigma attached to cannabis in its path. This is an exciting time for cannabis in the country and the only way forward is to make further progress towards full decriminalization, so hopefully the NFL resolution won't fall on deaf ears and will be echoed by other sports and leagues throughout the world.