It's a strain crossing scenario that just cannot be missed, neither by breeders nor growers. A genetic dream wedding of two strain legends that simply seemed to be meant for each other: Mother OG Kush and father Blueberry (selected in the year of 2000). They were hooked up by Dinafem, and the elitist offspring of this arranged marriage the Spanish breeders called "Blue Kush" – a highborn hybrid with a pedigree boasting two icons of the cannabis strain world that isn't blue-blooded, but at least blue-blooming: thanks to its Blueberry heritage, calyx and leaf colours can vary between blue and purple.

Experienced growers know the deal - the colder night temperatures are, the more intensely these special colours come up. And there's another colour that adds a majestic refinement to this vivid play of colours, covering the big compact Blue Kush buds in vast amounts, I am talking about the beloved trichomes' silvery white. Also in terms of growth habits, this strain excels. While OG Kush plants tend to mightily stretch, growing slender branches with wide internodes which may lead to stability problems with fat heavy buds, the medium-tall growing Blue Kush is less eager to stretch, becoming more compact and producing stronger branches.

She responds perfectly to training methods such as SCROG or SOG and does very well not only in soil but also hydroponic systems. Dinafem classifies Blue Kush as an easy-to-grow plant that is a guarantor of success to beginners and experts alike. Indoors, yields per square metre can add up to a pound, with the plants requiring a moderate 60 days of flowering for this achievement. Thanks to a finishing time of early to mid-October, she also thrives outdoors, especially if there's plenty of warmth and sun. Then 600-800 grams per plant are accomplishable. Blue Kush contains 90-180 times as much THC (18%) as CBD (0.1-0.2%), and her sativa/indica ratio of 55/45 produces a long-lasting high that balances physical and mental effects very well, not flooring the smoker, but making him communicative and sociable.

A good deal of physical relaxation adds to a cosy feeling that perfectly sets the stage for hanging out with friends. Blue Kush's aroma offers true connoisseur qualities, combining those typical OG Kush notes of petrol, pine and lemon with the berry sweetness of Blueberry that almost has a creamy feeling to it, pleasantly blending the pungence of OG Kush with its soft fruity touch. So, with its most promising inner and outer values, this variety is very captivating, which called The Doc into action – a guy who's always up for growing Kush strains.

He started his cultivation test by soaking two feminised Blue Kush Seeds in humic acid for six hours and then planted them into Jiffy pots. After less than 48 hours (!) already, the seedlings started to break through the surface – what a lightning fast germination! Exactly four weeks the two plants spent in the veggie stage, using this period of time for strong bushy growth with a multitude of robust side branches. When The Doc got them to bloom by cutting the light cycle down from 18/6 to 12/12, he counted 10-12 internodes, with the plants measuring 39 and 50 cm in height.

During the first four weeks of flowering, a significant OG Kush influence became apparent, in the form of a very dynamic stretching behaviour which made the side branches shoot up. One of the plants revealed a particularly strong stem elongation effect, having arrived at a 110 cm after four weeks of flowering and thus more than doubled its height. The other one came out at 80 cm (which meant a doubling in height) and much to The Doc's delight displayed that special play of colours described by Dinafem: the calyxes of the middle and upper buds were interspersed with colour hues ranging from red to purple. Also the upper shade and sugar leaves became purple and lavender blue, only here and there a bit of green showed through. Enthused The Doc: "Wonderful, this play of colours is such an eye candy! And it has occurred although my grow room temperatures are perfectly normal, not cooler than usual. The stretching phase is over, from now on, it's all about putting on weight and increasing potency. Both Blue Kush plants have already produced initial dense resin gland carpets, but of course there's a lot more to come…"

Flower production became hefty in the following weeks, all the Blue Kush buds literally exploded and swelled to amazing sizes which even astounded The Doc, a master grower who's spoiled by success: "This strain really rocks! The plants are boasting super fat dank nugs that will certainly make for a true heavyweight yield. And then there's this lovely scent… with both plants, much sweeter than expected, Blueberry's sweet berry fragrance is not only an accompanying tinge here, but just as present and intense as the piney and oily OG Kush aroma. These rather tart, zesty notes are garnished with a sweet creamy blueberry topping which results in a very appealing sophisticated blend."

In the course of the last flowering weeks, the shade and sugar leaves of the green plant's top cola and partly also in the middle of the plant became reddish which brought a touch of exotic to it as well. In the end, those colourful buds were almost dripping with resin, with an opulent trichome crust covering them in a most enticing glitter look. After 66 and 68 days - so the official flowering time was slightly exceeded, still totally acceptable though – The Doc took those scissors and did the harvest work. With a broad grin plastered across his face, he read the dry yield from the scales a few weeks later: together, the two Blue Kush plants had slammed amazing 271 grams onto the scales. 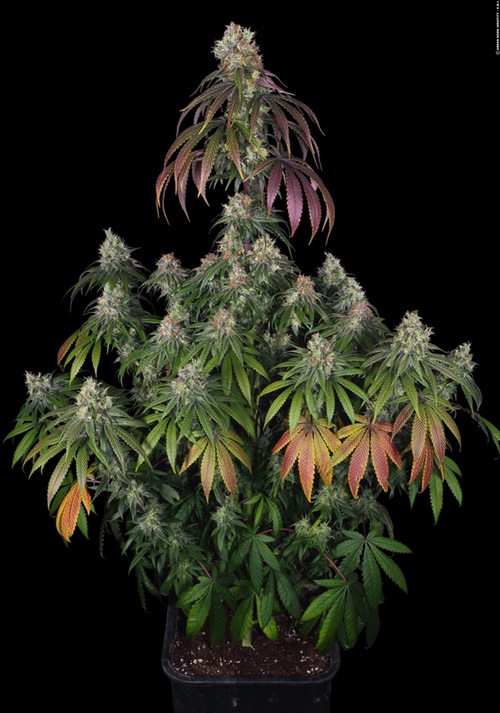 Which made the grow guru rejoice: "So colourful and so big-yielding, that's what I call a grower's delight!". Thanks to the drying and curing process, that both condimental and berry-like aroma had become perfectly well-rounded, first providing its berry sweetness to The Doc's nose when he took a smell at a bud, followed by its tart Kush aspect. Also, the dried buds surprised him with a biochemical phenomenon as their blue hues came out much more distinct now, so distinct that the buds really gave a beautiful lavender blue impression. For the following "blue hour", The Doc loaded his Crafty vaporiser with the usual test amount of half a gram, and as matter of course, he used the "blue stuff" for which he commented as follows: "In my favourite TV show 'Breaking Bad', the blue colour of Walter White's meth stands for unusually high quality – well let's see how it goes with my Blue Kush in this regard…"

When he vaporised Blue Kush, the succession of aroma impressions corresponded to the olfactory experience – on the inhale, that berry sweetness thrilled his taste buds, before it was overlaid by a tangy kushy aftertaste that spread out in his entire mouth. "That's some really toothsome weed! Delivering a kind of double flavour taste experience," The Doc said full of indulgence. He didn't have to wait long for the effect experience either – the second toke left him with a tingling sensation all over his body, and another toke later it felt as if the entire vapor had risen up into his head and gently pulled it upwards, just like a hot-air balloon.

While that didn't eventually lead to a real stratospheric soaring sativa high, he continued to feel pretty light-headed and his head got filled with lots of positive thoughts, a warm feeling of happiness flowed through The Doc and he felt "like giving the whole world a hug." Also physically, he felt relaxed. Pleasantly loose-limbed, not "spaghetti" so that he didn't get couch-locked. Instead, being in such a great mood, he decided to pay an overdue visit to his buddy Mr. Knolle. Not without taking three puffs off his vaporizer before though and putting a nice Blue Kush sample for Mr. Knolle into his coat. "What a champion strain," The Doc concluded. "So many gorgeous colours, so many heavy sticky buds, so much connoisseur flavour and such a great deal of positive mind stimulation – simply fantastic. This colourful spectacle with monster yields undoubtfully is another masterpiece created by Dinafem, I've fallen in love with this variety!" 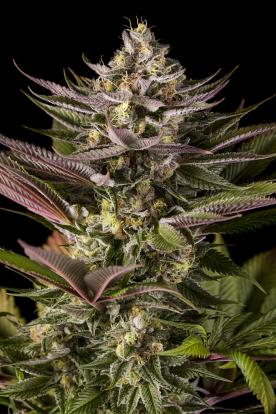