One of the strategies used to treat an aggressive disease like cancer is the introduction into the body, either orally or intravenously, of high doses of potent chemicals. This type of treatment is known as chemotherapy, and may include more than 100 different substances that are responsible for preventing tumour cells from continuing to develop.

Unfortunately, in addition to its results, this treatment is also known for its numerous side effects, which reduce quality of life of those who receive it. The unpleasant consequences are due to the fact that the drugs not only attack diseased cells but also healthy ones, causing vomiting, nausea, digestive and intestinal problems, loss of appetite, muscle aches and joint pain, fatigue and shortness of breath, among other possible consequences.

Under these circumstances, medical cannabis represents as an option increasingly used worldwide to relieve the side effects of chemotherapy. Hence, there have been many trials in recent years, in order to scientifically prove their effectiveness in combating different signs and problems associated with this treatment.

One of the latest studies in this field was carried out starting late last year at the University of Sydney (Australia) in what was "the most extensive and definitive test in the world to date on medical cannabis for the prevention of nausea and vomiting caused by chemotherapy," explained oncologist Peter Grimison, the leader of the project financed by the Australian state of New South Wales.

The 300 patients participating in the study will receive pills containing the same proportion of THC and CBD, cannabis's two main active compounds. This strategy is based on a study previously conducted in Spain, in which participants were provided a spray with a drug derived from cannabis with the same amount of both chemicals. Its results were very positive, as patients who received chemotherapy experienced a reduction in nausea and vomiting caused by treatment. Specifically, the number of patients who suffered decreased by 50%.

Nausea and vomiting caused by chemotherapy are due to compounds such as cisplatin (present in these chemical cocktails), which cause the excessive production of the serotonin hormone in a type of specialised cells in the gastrointestinal tract. High levels of this hormone irritate mucous and stimulate the vagus nerve, the main one controlling the digestive tract. After receiving the chemical signal, this nerve sends a message to activate the area of the brain responsible for the involuntary movements characteristic of nausea and vomiting. Cannabinoids prevent this process by binding to receptors in the digestive tract and blocking the action of the serotonin.

Although the new tests, such as that carried out in Australia, seek to improve the effectiveness of medical cannabis and find a suitable dose for the drugs, there are medications like Marinol (a pill containing THC), approved by the US FDA to treat nausea and vomiting caused by chemotherapy. 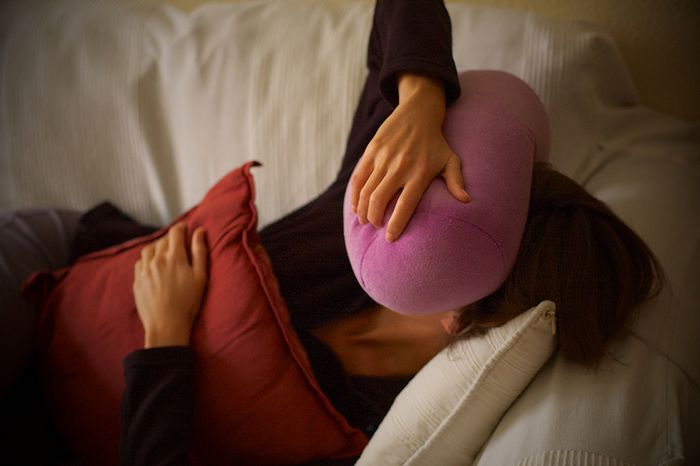 A remedy against loss of appetite

In addition to the symptoms described above, one of the most common consequences of chemotherapy is loss of appetite. If this effect lingers over time it can cause excessive weight loss, which seriously affects the health of patients, exacerbating the fatigue they can feel.

This process is due to the fact that chemicals present in the aggressive treatment affect the production of ghrelin, a hormone synthesised in the stomach that regulates energy metabolism and controls the sensation of hunger in the brain. Normally levels of this molecule increase before meals and decrease after them, but their concentration is impaired by chemotherapy.

Studies have shown that the THC in cannabis helps to stimulate the appetite of patients receiving these anti-cancer drugs. The authors of one of these studies, a team of Canadian scientists, also indicated that people taking drugs with tetrahydrocannabinol reported that food also tasted better.

The positive effect of the cannabis compound is due to the fact it triggers an effect similar to that of ghrelin. THC increases the production of another enzyme (known as AMP) in the hypothalamus, normally activated by ghrelin, which is involved in the body's metabolic and energy regulation, stimulating the brain to feel hunger.

Chemotherapy can alter not only the process that regulates food intake, but also bowel movements that contribute to the completion of digestion and the elimination of waste substances from the body. Thus, both constipation and diarrhoea are two possible consequences of chemotherapy, or a symptom of the disease itself. If diarrhoea episodes are recurrent and sustained over time, they lead to worsened health in patients, causing dehydration, weight loss, abdominal pain and fever.

Cannabinoids help to alleviate these irritating intestinal problems. It has been found, mainly in the case of THC, that it binds to the CB1-type receptors in the digestive tract, favouring the regulation of bowel movements, water removal and other secretions. Cannabis compounds also help reduce intestinal inflammation, another factor that can cause diarrhoea.

Headaches and pain in joints, muscles and the stomach are other very common effects of chemotherapy. This type of discomfort is mainly caused by the inflammation that drugs produced in different parts of the body, although it can also be produced by some type of injury or ulcer in the mucous membranes, internal coatings of various ducts and organs.

The painkilling capacity of cannabis compounds has been demonstrated in different diseases that cause pain, as it is able to reduce the inflammation that causes it. So, both CBD and THC regulate this tissue reaction by inhibiting the response of the cells in the immune system that cause inflammation.

Aid for the mind

Beyond the physical pain, patients receiving chemotherapy may also experience psychological distress in the form of depression and anxiety. Although they do not affect all people equally, cannabis's chemicals have been proven to be effective in alleviating these problems in some situations. This is because the cannabinoids in the plant act on the endocannabinoid system in the body, responsible for regulating mood, emotions and subjective perceptions of one's surroundings.

Cannabis compounds also produce a sense of calm that helps reduce feelings of anxiety and despair. They also improve sleep, which can be disrupted as a result of the substances in chemotherapy cocktails. If patients sleep better and longer they will feel more rested during the day and experience less fatigue.

Apart from the above medical cannabis can help relieve other, less common symptoms, such as sexual dysfunction (traditional Indian medicine has used cannabis as an aphrodisiac for centuries), itching and skin irritation, and the swelling of hands or feet that patients can suffer.

Although cannabis and drugs derived from its compounds already help chemotherapy patients to better cope with these symptoms, further scientific studies will help to find other uses and determine the best way to administer the plant and the medications produced using it. Of course, to take advantage of the positive effects of cannabis it is advisable to use it under strict medical supervision.