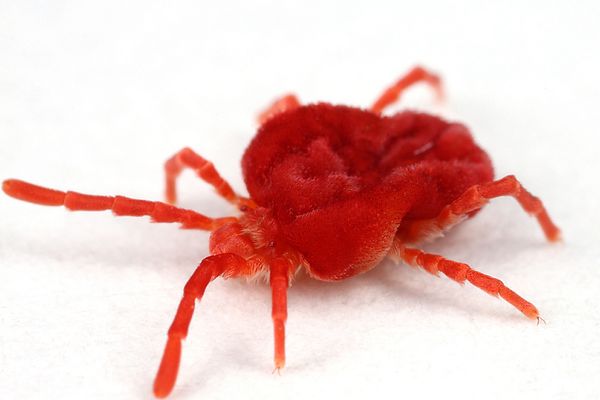 Luckily, there are almost as many natural alternatives with which to eliminate, control and prevent red mites, including predators and the products listed below.

Biological control is a natural method that involves using predatory insects as a means of eliminating red mites. One of the most effective predators is Phytoseiulus persimilis, whose larvae and adults relentlessly pursue their prey, catch them easily and feed on their bodily fluids (bon appétit!) leaving just a dry carcase that takes the shape of a black spot on the surface of the leaves.

Phytoseiulus Persimilis was accidentally introduced into Germany in 1958 hidden in a batch of orchids coming from Chile and a subsequent research study proved its effectiveness in fighting red mites. Surprisingly, adult P. Persimilis are bright red, while red mites are rather yellowish or brown. 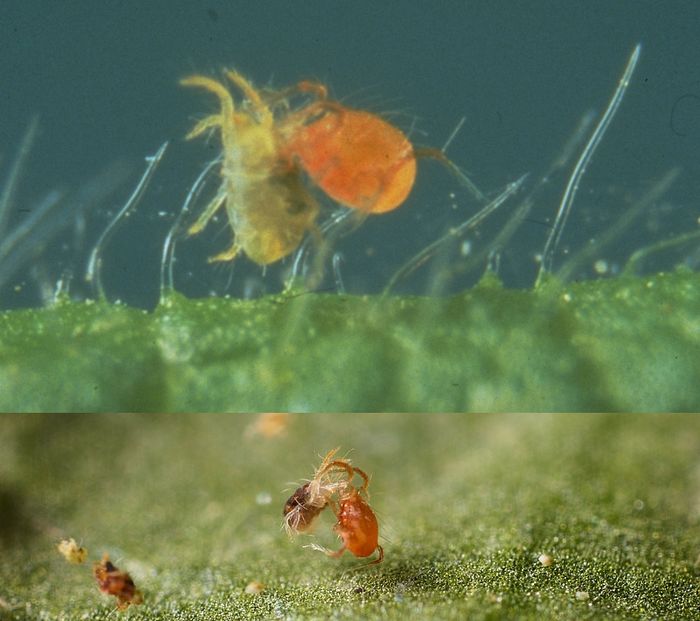 P. Persimilis nymphs feed on the larvae, nymphs and eggs of Tetranyque tisserand, while adults can consume up to 7 adult red mites or about 20 larvae and eggs per day.

The amount of predators necessary to keep red mites under control will ultimately depend on the infestation level of the crop, which you will have to assess prior to treatment.

The life cycle of predator P. Persimilis is twice as fast as that of its prey and thus it multiplies much faster, having a highly positive impact on the efficiency of the treatment. The eggs are laid close to the focal point of the pest so that the nymphs have better access to food. When all the red mites of a colony are eliminated, adults disperse themselves over the rest of the plants in search of new prey, this is why all plants should be in contact with one another.

Unlike shock treatment, biological control is an excellent tool for the long-term monitoring of mites and, being a natural remedy, it does not entail risks for the grower of for the cannabis plants.

Here is what to do if you want Phytoseiulus persimilis to be really effective:

Amblyseius californicus and other effective predators of red mites

Although Phytoseiulus persimilis is often the best option for eradicating Tetranyque tisserand, there are other mites that can be useful in terms of biological control.

Amblyseius californicus mites, also known as Neoseiulus californicus, are also very effective in fighting red mites. Round shaped and whitish/yellow/orange in colour, they are naturally found in the Mediterranean basin and in America and are particularly useful whenever the conditions are not suitable for Phytoseiulus persimilis:

Faced to a severe red mite problem, can be used as a complement to Phytoseiulus persimilis in order to multiply the effect. That said, when used preventatively, it is better to stick to one of the options according to the climatic conditions as, in the absence of red mites, Amblyseius californicus would devour P. persimilis.

Also, as A. Californicus is more sedentary than P. Persimilis, it has to be applied at the equivalent of 10 times the dose, from 20 to 500 adults per plant depending on the size and the level of the infestation.

Another useful predator against Tetranyque tisserand is Amblyseius fallacis. Similar to A. californicus in appearance and originating in North America, it can survive and reproduce at lower temperatures than P. Persimilis and A. Californicus and is therefore a great biological control agent in cold weather conditions.

There are also some non-mite predators that can be used for eradicating red mites. Here are some examples:

Here are some useful tips that will help you maximize the effect of the treatment regardless of the chosen predator:

Last but not least, never use pesticides (insecticides, acaricides, fungicides…) before, during or after the introduction of predators. If you have already done so, you will have to wait some days before you can apply the treatment, even some weeks depending on the life of the product and the toxicity of its active ingredients with regards to the predators you intend to use (always refer to the manufacturer's information).

There are many products available, particularly preventative ones, that can be used to fight red mites naturally. That said, as mentioned earlier, you will have to choose one of the two options, namely predators or natural acaricides, as it is not a good idea to use them simultaneously.

Based on our experience, these are the most effective products to avoid red mites in cannabis crops:

One important thing to consider is product rotation. If you fight red mites with a single insecticide, the pest could develop resistance and the treatment would no longer be effective.

And don't forget that red mite prevention depends upon a number of factors that can be monitored easily, thus reducing the risk of an attack. Red mites hate humidity, so try to establish the crop in a relatively cool, not very dry area and consider spraying the plants with water daily during the growth and the stretch period.

Keeping the growing area clean is another key factor: red mites don't come out of thin air, it is often the growers that introduce them unwittingly in indoor setups. Sadly, the exchange of cuttings and plants amongst growers in an excellent way of exchanging red mites too.

One last tip: watch your plants as often as possible so that you can act on the first signs of red mites, i. e. the distinctive small light dots that appear on the surface of the leaves.

Now that you know how to avoid red mites in your cannabis crop, go ahead and enjoy your grow.