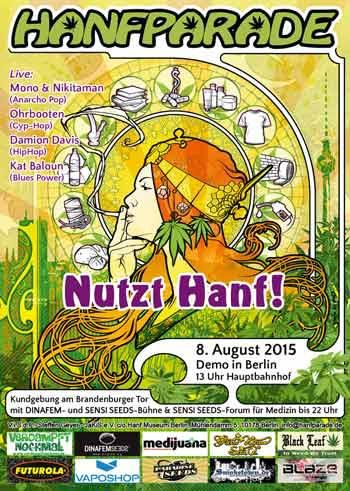 Germany will once again play host to an event that has become a standard tradition: Hanfparade, a march by supporters and activists who will meet on 8 August, between 1pm and 10pm in order to call for legalisation, both for medical and recreational use. Last year more than 6,500 people attended the event in Berlin, which is the administrative centre of a country that has quite restrictive laws in relation to cannabis. Some cities, such as the capital itself, have strong bans in place, although users are allowed to carry up to 15 grams of marijuana in their pockets.

This year the march aims to call for the use of hemp, in order to condemn the bureaucratic obstacles faced by those who try to grow it. Also, the organisers want to remind people that only some ill people, and in special cases, are able to access medical cannabis products. Therefore, they want medicinal marijuana to be free and accessible for whoever needs it. During the event, there will also be talks about politics, social issues and even philosophical matters linked to the legalisation of marijuana, and there will be discussions regarding matters such as the difference between law and ethics in all matters relating to cannabis.

The organisers of the march explain that legalising marijuana for recreational purposes could benefit the country from a taxation point of view, and they want to offer solutions and new visions of the future in order to demonstrate that there are alternatives to cannabis prohibition. Therefore they will propose specific measures in order to change legalisation and in this regard, they require the support of everyone who sympathises with the cause, in order to put pressure on politicians.

At the end of the march there will be a meeting where several public figures will talk about regulation. Also, participants will be able to enjoy food and drink made from hemp (without psychoactive effects), as well as textile and cosmetic products made with the plant. During the march, that Dinafem will experience first-hand as a key guest, participants will be provided with all kinds of information in order to resolve any doubts and explain the general situation of the sector.

A party that is committed to legalisation

The march will take place within a context where the German Green Party has been fighting vigorously for legalisation over the course of the last few months, specifically, since March when they backed a draft bill to regulate marijuana, decriminalise adult consumers and protect minors (22.2% of German adolescents aged between 15 and 16 are consumers). The party believes that the country’s prohibition policy has failed and believes that it is necessary to bring people who are forced to consume in secret, out of their hiding spots.

One of the Green Party’s main concerns is that the current prohibition policy encourages a black market for adulterated substances, containing lead, glass and other toxic products that cause health problems and put consumers in danger. The party claims that by not regulating the market, citizens are not really being protected and efforts to reduce damage are in vain.

Therefore, they propose that in terms of private use, consumers should be able to purchase marijuana, possess and transport 30 grams of cannabis and keep up to three marijuana plants at home. They also intend to decriminalise consumption among adults and reduce police and judicial persecution that is often used against adult consumers. Furthermore, they believe that establishing a tax rate of 6.7 euros per gram could generate between 950 million and 1.8 billion euros per year for the state coffers.

Just over a month ago, the conservative politician Joachim Pfeiffer, a member of the Christian Democratic Union, decided to support the Green Party’s campaign, reviving the debate throughout Europe. The politician believes that the current policy against cannabis has failed because, despite the ban, the number of users has not decreased. He also wanted to remind people that more than two million Germans consume cannabis on a regular basis, which means that it is the most popular illegal substance in Germany.

Some supporters of the cannabis movement have applauded Pfeiffer’s decision. The activist Georg Wurth has declared that the Christian Democratic Union has always built barriers to make the path to legalisation more difficult and that “now we have someone from the party talking publicly about legalisation. That is a great step forward”. It may be the first step towards encouraging other politicians to move in the same direction.

According to Pfeiffer, legalising cannabis would put an end to organised crime, raise awareness about the negative effects of consuming tobacco, and generate around 2 billion euros in tax revenue per year.

In turn, Steffen Geyer from the Berlin Hemp Museum believes that it is now time to legalise marijuana in Germany and that the plant “should be governed by the same rules as tobacco and wine”. He adds that he is troubled by people and economy and by the organised crime that exists as a consequence of prohibition. In response, Marlene Mortler from the country’s Federal Drugs Commission has stated that Germany does not need to legalise more substances because “Germans already have enough problems with alcohol and tobacco”.

There is still a long way to go before legalisation. In fact, a while ago, in the district of Friedrichshain-Kreuzberg in Berlin, there was talk of opening the first legal cannabis coffee shop. Two years later, the idea lives on as a mere hope. However, the examples offered by the United States and Uruguay are always at the back of people’s minds, therefore Germans believe that they are back on the path towards liberalisation and hope that it will also have positive effects on the rest of Europe.

The Hanfparade next month in August will be a great opportunity to continue debating and looking for real solutions to the change that is wanted in Germany. All of this will take place at an event offering participants live music and involvement from important figures from the sector. They will all be supporting an end to the “disproportionate” criminalisation suffered by cannabis consumers in the country, a place that excessively limits freedom when it comes to deciding.