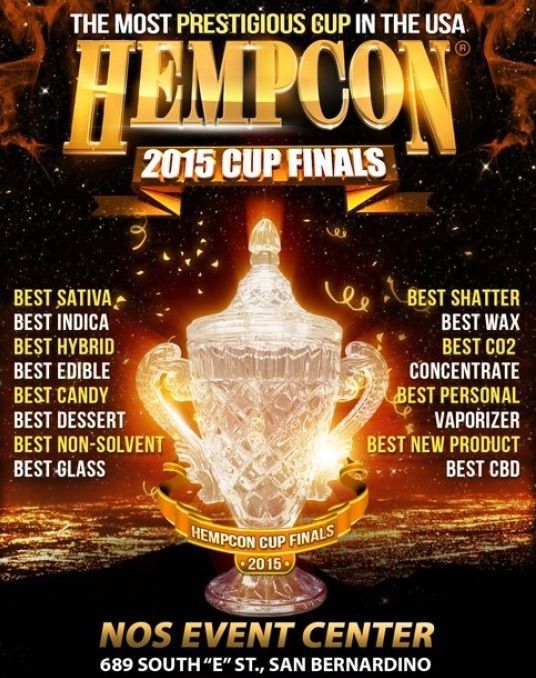 The Hempcon Cup was created to show people all aspects of the medical cannabis industry in California. It is an exclusive competition open to producers, growers, extraction artists and even cannabis chefs. It also involves a Cup as part of what is now considered to the biggest event in the medical cannabis sector in the United States, as it is held in different cities and has hundreds of exhibitors that get together for a weekend packed with seminars and presentations from industry leaders.

The Hempcon Cup prizes constitute one of the main yardsticks for the quasi-legal cannabis industry in California, where at least 750,000 patients move within a labyrinth of medical cannabis regulations and bans that govern the industry throughout the entire state. Specifically, these prizes are chosen by a panel of judges comprised of 20 professionals hand-picked from the cannabis industry, 20 VIP judges and five official Hempcon judges. The competition is divided into 22 different categories and ranks each sample on a scale of 1 (weak) to 10 (strong) in each of the following categories:

And we are in finest celebratory mood, because at the last edition of the 2015 Hempcon Cup, held at the beginning of November at the National Orange Show Center in the city of San Bernardino, a concentrate of our Critical Jack strain won first prize for Best Shatter, thanks to a BHO extract presented by Cracker Jack Extractions. "Shatter" is the name given to a butane gas extraction (BHO), that is solid, transparent and fragile at room temperature, and breaks into pieces like glass would. In this case, the Cracker Jack sample created using our sample of the Critical Jack strain convinced the 45 judges, up against around fifty competitors from different places in the United States. 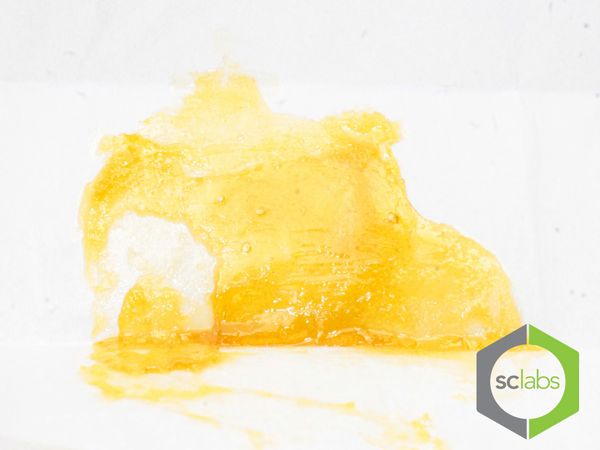 All of the winning samples at the Hempcon Cup are analysed by SC Labs, the event's official laboratories, with the aim of supporting the cannabis community by producing metrics based on specialised laboratories used to control the quality of participating samples.

This is the cannabinoid profile provided by Dinafem's Critical Jack sample that won the Best Shatter category: 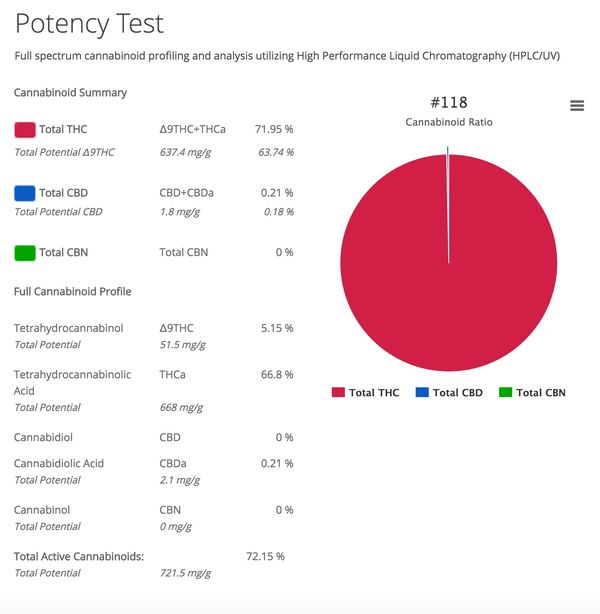 Gas chromatography with a flame ionization detector (GC /FID) was used to analyse the terpenes. This is a technique that can identify more than 35 of the most common terpenes in cannabis strains. Terpenes, responsible for smell and taste of cannabis, shape and modify the effects of THC, CBD and other cannabinoids. Analysing terpenes is crucial in order to differentiate between marijuana strains as terpenes have a great influence on the medical and psychological effects of a plant. In fact, the relationship between cannabinoids and terpenes, baptised by Raphael Mechoulam in 1999 as the "entourage effect" is what ultimately distinguishes one strain of medical cannabis from another.

This is the terpene analysis of the winning Critical Jack sample: 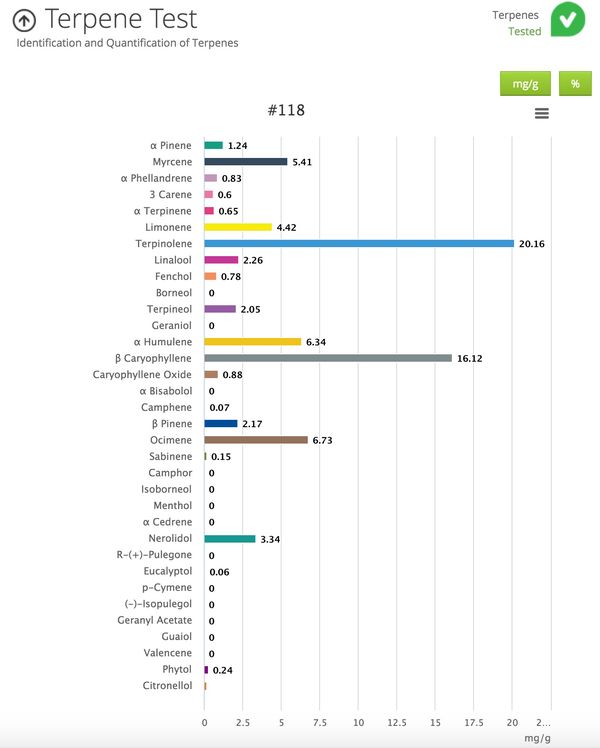 The SC Labs analysis also shows up traces of residual solvent using gas chromatography, in order to ensure that the cannabis concentrates are free from harmful impurities or chemical products. There are an increasing number of patients looking for very concentrated forms of cannabis (wax, shatter, budder, etc.). These types of concentrates require the use of a solvent (for example, butane, CO2, ethanol, propane, etc.) in order to extract the cannabinoids and the terpenes from the vegetable matter. Finally, heat, a vacuum and/or other methods are applied in order to expunge any remaining solvent. In order to ensure the quality of the concentrates these residual solvent tests are carried out: not only to confirm that the concentrate process has been carried out with a high quality solvent (free of impurities and toxic odours) but also to ensure that an appropriate purging process has taken place (that is to say, a vacuum, desiccation, etc.).

Lastly, two final analyses were carried out on Dinafem's sample. First, a pesticide test that can detect traces of chemical pesticides in dry flowers or cannabis concentrates; for which a mass spectrometer along with liquid chromatography (LC / MS / MS) is used. The ingestion of pesticides can be very dangerous, even in very small doses. Although many cannabis growers have adopted ecological growing methods, others continue to use illegal or banned pesticides. The detection of pesticides is necessary as a result of the strong conviction that patients deserve medicine that is as free as possible from pollutants.

Along with the pesticides test, there may also be a final microbiological test using the polymerase chain reaction technique (PCR) carried out in real team and an analysis of the indicator microorganisms with Petrifilm plates. The same conditions that are ideal for growing medical cannabis can also be ideal for the emergence of microorganisms such as bacteria and fungi (yeast and mould). If the cannabis is not duly analysed, the medicine that is consumed can be contaminated with a wide range of harmful pathogens that can lead to serious complications for many patients. Using these techniques, it is possible to identify and detect yeasts and moulds, E. coli, coliform and enterobacteriaceae such as Salmonella and Shigella, which have been shown to be potential contaminants of cannabis.

As can be observed in the tests, the rigorous analysis by SC Labs of the winning sample not only shows the high quality of the extraction carried out by Cracker Jack, it also shows the real medical properties of our variety Critical Jack, the result of a cross between a seed of Critical + with a Jack Herer. This is undoubtedly a complex strain of cannabis that deserves pride of place in any garden. It has been applauded throughout the world with recognition such as this first prize at the Hempcon Cup, the most prestigious cup in the world for medical cannabis. 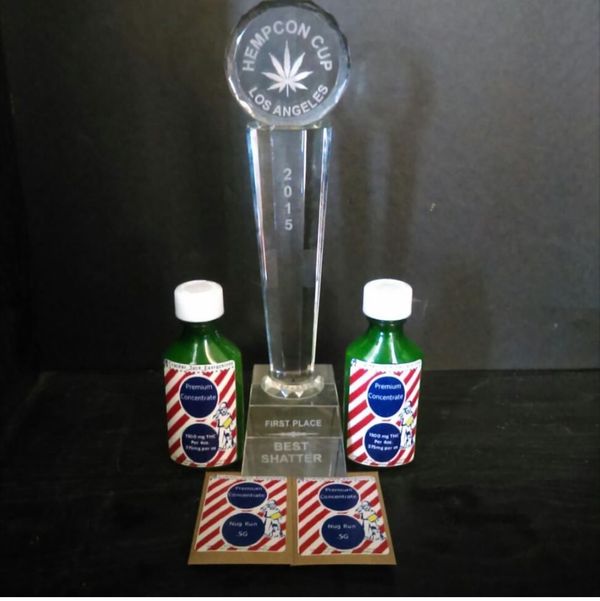