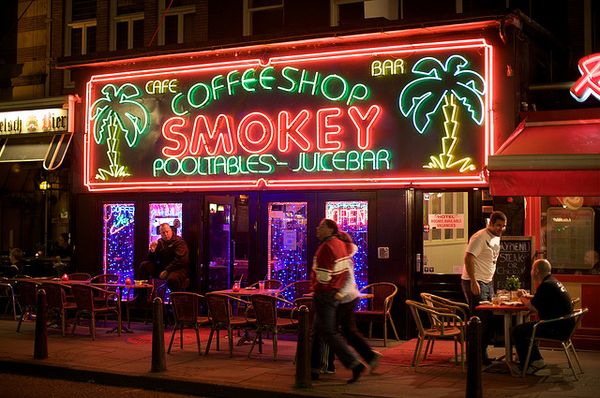 Since the beginning of the 70s, Holland has offered an image of itself as one of the most pioneering countries in the world in terms of social matters: open hospitals and psychiatric hospitals, neighbourhoods set aside for carrying out legal prostitution, an egalitarian health insurance system, welcoming towards migrants, accommodating towards homosexual communities and with regulated tolerance towards cannabis smokers. Furthermore, this tolerance extended to alternative lifestyles that had flourished throughout the West at the end of the sixties, with Amsterdam and the country's large countries viewed as the standard bearer for the squatters' movement.

The social-democratic and centre-left governments that ruled the kingdom of bicycles throughout this period, created a Scandinavian type democratic model that was envied by the neighbouring Benelux countries and later, by the European Union. The conviviality of coffee shops and the festive and free reputation of Amsterdam were things that existed only in the imagination of neighbours of this little kingdom of 15 million inhabitants that seemed to be blessed by the gods. During the 1980s, prohibition dominated the European landscape, particularly in France. The possibility of consuming quality cannabis in a completely legal manner, comfortably sat in front of a hot drink, seemed like a entirely new concept. It was the symbol of freedom that endless European users longed for in vain.

With the market economy being what it is, a tourism sector worth billions of euros did not take long to emerge. In 2010, the country's authorities calculated that the number of foreign consumers coming to visit coffee shops each year stood at around one million three hundred thousand. At first, the phenomenon only had a massive influence on Amsterdam, the country's only true pole of attraction for tourism. However, during a second phase, it has had an increasingly large influence on border towns in the South: Breda, Roosendaal, Terneuzen, Goes, Middelburg and other cities from the provinces of Limbourg and North Brabant. The turnover of local coffee shops has skyrocketed. Take for example the case of Terneuzen, a border city in the south, an hour's drive from Lille, the Check-Point was an establishment where it was sometimes necessary to queue with your receipt for a good half hour in order to get served. At the weekend, thousands of young (and not so young) people mainly from France, but also from Belgium and Germany, would come and consume in an immense lounge that was perpetually shrouded in smoke. They would often return home after doing a little shopping there and having enjoyed an excellent day.

"It should not be forgotten that Holland is and above all a country with a Protestant culture and as such, it is often puritan..."

Now, that era seems very distant. For some years now, Holland has been in a period of alternating radical politics. The Christian/Lutheran orthodox and conservative parties have increased their level of representation in the House of Representatives. Furthermore, the Party for Freedom (PVV), founded in 2006 by Geert Wilders, brings the voice of the populist extreme right to the legislative Assembly and participates in government. It should never be forgotten that Holland is also a VERY protestant country, and as such, puritan. It has a society that values discretion as well as respect for morals and the law in public spaces. Tolerance has therefore come up against limits. Within the space of a few years, Mark Rutter, the prime minister and a self-declared "personal enemy" of cannabis, has undertaken the systematic dismantling of free spaces that had been left undisturbed by his predecessors.

The attempt in 2012 to impose the "Wietpass", a kind of passport reserving the right to legal smoking to nationals, was cut short. Actors from the sector mobilised to defend their companies and there was a fierce debate. It seems that their economic power was taken into account. For example, there was no chance of touching the coffee shops in Amsterdam during the period of financial crisis. That would have been a disaster in the making for all tourism professionals, not just those running establishments. However, this reasoning also serves for other large cities to more or less benefit from this business. Furthermore, throughout this period, the street traffic that had disappeared twenty years ago has once again returned. Faced with the outcry resulting from the brutality of the measure, the government in The Hague had to do an about face without abandoning its priority objectives: the medium-term dismantling of the cannabis sector.

Smokers that made the trip from regions in the north of France and Belgium were one of the key targets. First of all, in 2013, the centre-right coalition voted for a law that gave local elected officials complete powers to purely and simply regulate or ban cannabis coffee shops in "their" town. Establishments located in border areas have closed one after another. Those that remained open have been forced to ban foreign nationals from coming. For all foreign consumers that have not got the message and have tried to venture into the country, interventions and fines have multiplied. Also, everyone should be reminded that even in places where consumption is tolerated, exportation is and will remain to be prohibited. Very effective actions by co-operations have been threatened by the Belgian and French customs authorities. French customs officials have been placed at parking areas close to coffee shops in order to note down the license plate numbers of probable offenders in order to then stop and search them at the border.

"Holland has never been the smoker's paradise that many have believed it to be..."

For many occasional tourists, this repressive attitude has been a profound disappointment. On social networks ad forums, there are an increasing number of bitter and disenchanted comments such as the one below left by Wizzard33 on the forum Cannaweed: "In any case, over there is really dead at the moment, all they have is clogs, canals, and windmills under the rain, some old things, well, it isn't bad for attracting tourists". The festive, libertarian, and welcoming image that has traditionally been conveyed by Holland, seems to have given way to that of a society that is strictly conservative, closed and relentlessly repressive. The latter image is undoubtedly just as false as the first. The truth is probably somewhere between the two. Holland has never been the smoker's paradise that many have believed it to be. While the usage of cannabis has long been tolerated, encouraging the development of an economic sector, it was not viewed any more favourably by the majority of people than going to frequent the "reserved" areas. It should be remembered that despite the large availability, the sale and consumption of cannabis per citizen is 30% lower than the statistic recorded in France. Tolerance is certainly a national virtue however it also constitutes a sort of pitiful condescension. Under no circumstances was it able to accommodate regular and large scale cross-border traffic. Nor should we see the image of the country linked with that of the hemp leaf.

Nevertheless, it is also true to say that 61% percent of Dutch citizens are in favour of legislation, while in France, 63% of those surveyed stated that they were opposed to it. This is also somewhat revealing of two conceptions of the law and society that go against one another. As Rik, a Dutch lawyer remarks mockingly: "In France, laws are often unsuitable, if not unenforceable. It is therefore normal to try and get around the law, or at least it isn't so serious. In Holland, we try to legislate in accordance with social practices. However, in turn, society expects citizens to conform strictly with the law. In France, for example, lots of "responsible" growers' collectives have emerged here and there. Their activity is illegal however the authorities remain indifferent to this infringement, because public order is not directly threatened. Here in Holland, Social Cannabis Clubs are extremely rare and completely secret because they are illegal". The government's desire to smash the sector is therefore opposed to the different opinion of the public that remains attached to what it considers as a freedom. As is often the case, cannabis polarises conflicts and debates about the evolution of society. The fight continues and it would be a risky step for anyone to try and predict how it will end.