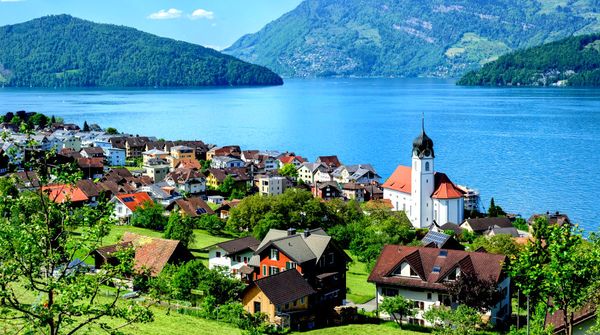 Since the beginning of March, several tobacconists display white and green posters informing the public that "100% legal cannabis is available". This information is showcased next to soda and chewing gum adverts. Margot Schneider, tobacconist, opens a little pink box containing five grams of bud which she uses to show clients the new product. CBD-rich cannabis is nothing different from its psychoactive counterpart: the aroma, the appearance and the feel are exactly the same as that of regular weed, causing the police a headache during seizures and forcing them to turn to lab tests in order to find out what they are dealing with.

The five grams sell for 70 Swiss francs – €65 – and Frau Schneider, a tobacconist based on the banks of Lake Geneva, sells from ten to fifteen boxes a day: "People say they use it for therapeutic purposes, but I believe the real use is recreation and relaxation. But as far as it is a legal product, I have nothing to say. Tobacco has been sold since I can remember, and it is not exactly what you would describe as beneficial, so I have no objections." Anyway, the public perception is that cannabis and intoxication go hand in hand, the degree varying according to the strain. This intoxication is exactly what most recreational users are after, and thus they opt for THC-rich weed (such as Dinafem's Moby Dick, which contains around 21% THC). Cannabis intoxication, understood as a disturbance in the level of consciousness, is the argument used by the authorities for its prohibition and for clamping down on users. Accordingly, if intoxication does not occur, there is no room for prosecution.

In any event, cannabidiol (CBD) is still very much appreciated by users, and it is therefore a great alternative for the regular users who don't want to rely on the black market for their supplies, plus the price per gram is roughly the same. Other users are interested in the molecule's remarkable therapeutic potential as a remedy for spasms, nausea, migraine, painful periods, glaucoma, inflammation, allergies, infections and so on. Perhaps more surprisingly, it is also used in rehab programs as a means of easing the symptoms of withdrawal. In fact, separating intoxication from consumption is key in many withdrawal protocols and CBD-rich marijuana presents itself as a sort of miracle cure for the alleviation of several conditions, just as it happens with Tiger Balm in Asia.

The companies that have joined this trend don't lack imagination and are marketing a wide range of products to spark the interest of Swiss consumers. CBD-rich weed lends itself to a variety of creams, ointments and cosmetics. Plus, there is a whole range of e-liquids for vaping, essential oils and other extracts and, needless to say, the classical dry bud, which can be smoked in the standard way but which is purer and more effective if vaped.

We are therefore talking about a whole new industry that has emerged in just a few months. CBD Livraison is one of the companies that has seized the development opportunity offered by the legal cannabis sector. The company boasts an online shop, some fifteen brick-and-mortar stores – some of them 24/7 – and a home delivery service with the same timing as if you were ordering pizza.

Martin Heller, the marketing strategy advisor that has monitored the launch of several products of the CBD range, is enthusiastic: "As legal marijuana rests on different commercial trends, the acceleration in sales has been meteoric. First, there is the rise in popularity of alternative medicine, aromatherapy, healing plants and, more generally, of all things natural. Western medicine is often too invasive and pharmaceutical companies don't get good press, which is in the interest of my clients. And we can't forget that cannabis has a special magnetism linked to its ambiguity and to the thrill of the forbidden. Even if more in-depth research is still necessary, the therapeutic benefits of this molecule appear to be real."

Cannabis has long been synonymous with intoxication and "getting high" both for the users and for the authorities, its psychoactivity clearly overshadowing its therapeutic potential and its relaxing effects. But the buzz around this new product demonstrates the keen interest of consumers in cannabis, whether legal or not, evidencing that reviewing the legislation is all it takes for this major industry to boom. CBD-rich cannabis has taken off in Switzerland the moment advantage has been taken of the loophole in the federal legislation, as simple as that!