The first thing that comes to mind when citing our Industrial Plant Auto CBD is the word "production." Like the other automatic strain with CBD that we have just launched at Dinafem, Haze Auto CBD, this new genetic exhibit very strong results in terms of their yield and performance, providing a very appropriate choice for commercial production. In this particular genetic a mother line was used, selected to be as productive as possible, in order to obtain a lineage of marijuana plants full of huge, heavy, resin-covered buds that were also as homogeneous as possible.

Industrial Plant Auto CBD is fruit of crossing the ultra-productive Industrial Plant and an automatic line rich in CBD, producing a THC/CBD ratio of 1:2, as their respective levels are 5.89% of THC and more than double the CBD: 13.28%. The standard deviation for both cannabinoids is 1.24% for the CBD and 0.43% for the THC. That is, the THC is more stable and the CBD varies a bit more, resulting in a plant apt for daily consumption without creating any problems in terms of concentration or physical effects impeding normal daily life and its activities.

There are genetics that, even possessing mothers with a similar genetic level, have a greater transmission capacity; i.e. there are some that rapidly dilute, while others are dominant. In this case the line of the original Industrial Plant was more dominant, producing very little deviation between plants of its type. If, for example, you have 10 plants, the difference between them at the chemotype level (the same botanical species appearing in other forms due to different growth conditions) is minimal.

Stability at all levels

This deviation data means that virtually all the plants are the same, resulting in very homogeneous crops. If a grower plants 10 different seeds from the same can of Industrial Plant CBD Auto, all the plants will exhibit similar effects. And, most importantly: in addition to homogeneity in terms of their effects, at the structural level the plants are very similar, with specimens that do not exceed 120 cm in height, but with a great accumulation of flowers at the top, and abundant branches capable of holding a large number of resin-covered buds.

This allows one to enjoy a very quick and homogeneous crop, but also one with high CBD levels, almost as if they were clones, which makes it possible to grow them using an optimised SOG (Sea of ​​Green) system. For example, in a given growing space one can produce, under high-density conditions, up to 36 clones per square meter (25, 30 or 36 cuttings, whether in rows and columns of 5x5, 5x6 or 6×6). With only 16 Industrial Auto CBD plants one can achieve even better results in terms of yield. You can find an example of this type of extreme autoflowering crop in another of our most popular strains: Moby Dick XXL. Don't miss out on the spectacle of this one set up with HPS and LED lights. 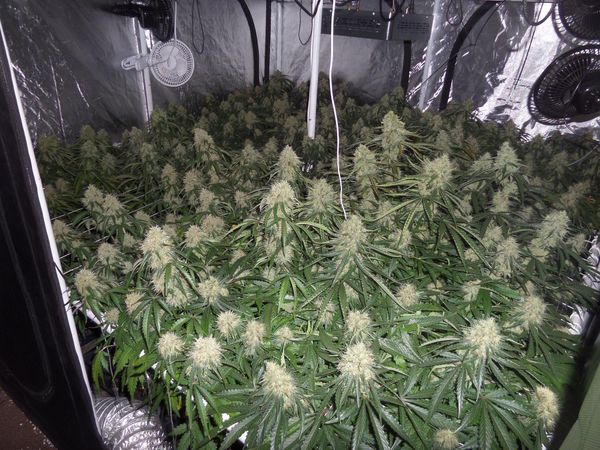 Even though it is a truly industrial plant, based on its high stability, given its size, shape and effects (thanks to its constant cannabinoid ratio), there are major differences in terms of taste and scent. Besides seeking a mother line that was as productive as possible, we managed to produce a pungent aroma and a much sweeter Sativa flavour, one that is less lemony than that of traditional Haze, and with intense tinges of sweet fruit, Skunk, citrus, and spices, making it irresistible to the palate. Industrial Plant Auto CBD maintains its parental heritage with these very complex organoleptic qualities, recognised and acclaimed throughout the world, but it goes a step further, with sweeter and more delicious nuances bound to dazzle even the most demanding consumers.

The analyses performed in our laboratory make it clear that this chemotype is very consistent, with very little variation between specimens, which is very important for users. This means that every Industrial Plant Auto CBD contains a little more CBD, or equal amounts of CBD and THC, but never less CBD than THC. Hence, the effect is steady in every plant, with all of them producing a similar mild and controlled effect, which makes Industrial Plant Auto CBD a very good marijuana to work with and to enjoy cannabis in a very sustainable way.

It is also a very holistic plant, its concept based on a total integration of cannabinoids, as opposed to their separation. In fact, the idea of cannabis lacking CBD (although it naturally forms part of the plant's DNA) is the result of market forces that have always demanded the most potent marijuana, it being the largest generator of revenues. Thus, the trend has been to reduce CBD levels so that they would not diminish the psychoactive effects of the THC. The holistic concept surrounding this variety stems from its ratio 1:2,25 ratio (like the yin and yang), which makes it a more complete plant, respecting its two main cannabinoids, which also makes its high much more natural, and with fewer side effects.

For years ultra-powerful marijuana has been the goal, for a number of reasons, but this is not necessarily the healthiest or most sustainable approach. CBD had been removed as one of the keys to producing more powerful highs. In accord with this holistic conception, Industrial Plant Auto CBD is a strain whose combination of cannabinoids produces a much more natural effect for the consumer than that offered by recreational marijuana without CBD, much more extreme at every level.

Although many insist on creating strains of cannabis based on a single compound of marijuana, numerous studies have shown that these are not effective from the medical point of view. What is really powerful is the combination of several elements that will have different effects on different people. This interactive synergy between marijuana compounds, a term known as the "entourage effect," is the foundation for tomorrow's cannabis-based medicine, with strains that do not only focus on THC, but emphasise other equally important cannabinoids and terpenes, such as CBD.

Check out how this change of mindset is sweeping the cannabis world with our new Industrial Plant Auto CBD, an example of high stability at every level. 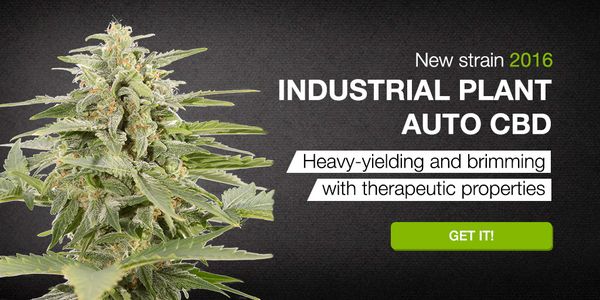