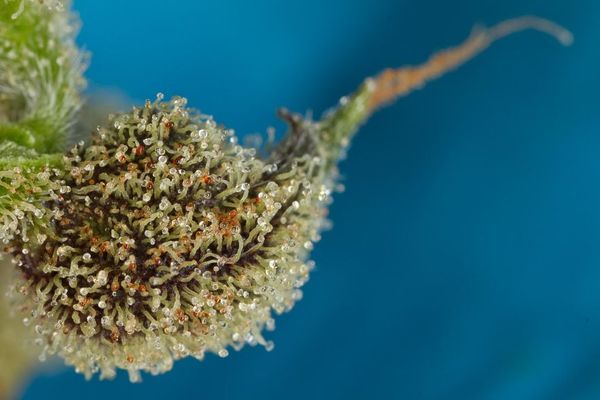 Paradoxically, however, it seems that we are increasingly unhappy. Perhaps in this pursuit of happiness, on this evolutionary path we have taken, on which we exploit technology to satisfy more and more of our needs, something has gone wrong. The modern society we have constructed us subjects us to increasing pressures exposing us, more and more often, to disorders that affect our levels of happiness, such as depression, stress, anxiety ...

It seems that there is a close relationship between our moods and cannabinoids, at least according to the studies by doc. Tanja Bagar, a former researcher at the National Institute of Chemistry in Slovenia, an Assistant Professor of Microbiology at the Alma Mater Europaea University, a collaborator at the Austrian School of Health and Development, and the CEO and Chairman of the Expert Council of ICANNA, the international institute of cannabinoids, an NGO made up of professionals from different fields focusing on scientific research into cannabinoids.

Tanja Bagar centres her studies precisely on this very human need to pursue happiness. To a greater or lesser extent, we all orient our lives in the direction we believe will bring us the most satisfaction and well-being. We are at a developmental stage at which we no longer need to struggle to survive, at least not for the "physical survival," so we have more time to devote to the "pursuit of happiness."

The idea that each individual has a "right" to pursue their own happiness is increasingly deep-seated in Western society, though it is not as new as we might believe; it was already upheld, for example, in the United States Declaration of Independence, in 1776, and is one of the constitutional rights recognised by this country.

Based on this idea, Tanja Bagar proposes a journey into our bodies to find out what substances are involved in the biology of happiness. Our body is composed of about 35 trillion cells, which differ depending on their locations, which is why the cells of the brain, liver and bone, for example, are very dissimilar. In a healthy body, all these billions of cells work in unison and in sync to maintain balanced vital functions.

If we look closely at a cell, we find that it looks something like this: 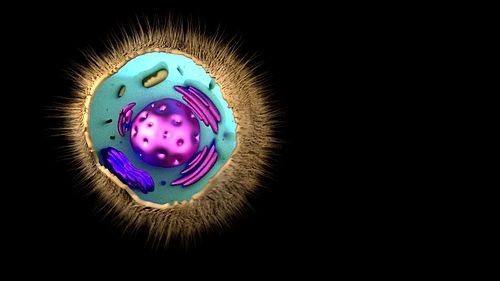 To detect the substances around them cells use receptors, kinds of "arms" with a portion protruding outside the cell, and another located within it. When the receptor recognises a substance that it "likes," it captures and transports it to its interior, the cell thereby responding to the chemical in question. In a given cell there are different receptors, each responsible for capturing a particular substance, as the receptor and the substance in question have to "fit," as would a key and a lock.

Each cell has at least 1,000 receptors, which vary depending on where they are located. For example, cells of the pancreas are very "interested" in knowing how much glucose there is around them, to know how much insulin to secrete. Therefore, they have many receptors for glucose. In the same way, other types of cells have different receptors designed to identify and capture other substances, always depending on where they are located and what their functions are. 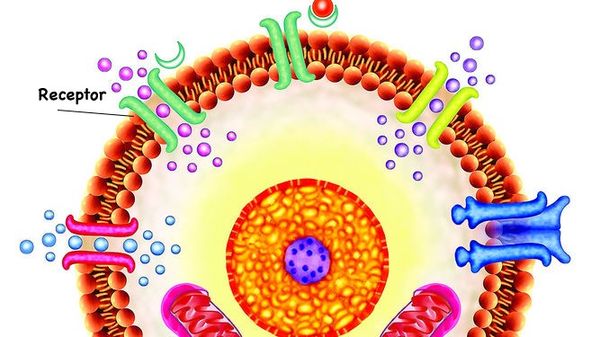 What substances are involved in our "happiness"?

Scientific research on what substances are involved in our ability to feel "happy" has gone through different stages, and even today there is still much work to be done in this field. As noted by Dr. Bagar, first it was believed that the substance responsible for our happiness was serotonin, also dubbed the "happiness molecule." Hence, most anti-depressants were designed to modify levels of this substance. Later the scientific community focused on the study of oxytocin, a molecule that gives us the desire to connect with others, to be closer to them and to adopt a more caring attitude. It was also discovered that there are other substances involved, directly or indirectly, in our sensation of wellbeing, which are:

If we analyse the levels of these substances in a person's brain, we can get an idea of how happy or unhappy he feels. Any imbalance or lack of these molecules will cause significant changes in mood.

What is the endocannabinoid system and how is it related to our happiness?

The endocannabinoid system consists of cannabinoid receptors located in certain cells of our bodies. More specifically, there are two types: CB1 receptors, expressed mainly in the nervous system, and CB2 receptors, related to the immune system and, therefore, mediating in anti-inflammatory effects.

What are cannabinoids and how do they affect our moods?

With the discovery and description of cannabinoid receptors, the abundance of these receptors in the brain baffled scientists. It seemed strange that our cells were so well synchronised with these relatively rare molecules found primarily in one genus of the plant kingdom: cannabis. The answer to this mystery was found along with the discovery of N-arachidonoylethanolamide

(AEA), an analogue of THC, later called anandamide, which forms part of a class of signalling molecules, endocannabinoids, substances produced by our very bodies very similar to the plant's cannabinoids. This explained the large number of cannabinoid receptors present in our cells: it turned out that our body produces its own cannabinoids!

Until this discovery it was believed that serotonin and endorphins were the "happy molecules" known for their implicit role in the regulation and manipulation of emotional states. But the discovery of endocannabinoids has revealed new biochemical pathways towards happiness. The name anandamide (ananda - the Sanskrit word for "joy, happiness") suggests their impact on moods. Therefore, after this discovery it was concluded that there are two types of molecules capable of activating our CB1 and CB2 receptors:

The cannabinoids found in the greatest concentrations in the cannabis plant, and into which there has been the most research, are THC (tetrahydrocannabinol ) and CBD (cannabindiol). Furthermore, the most important endocannabinoids that our body produces are anandamide and 2-Arachidonoylglycerol (2-AG). It turns out that the structures of THC and anandamide are very similar, as are those of 2-AG and CBD, which is why they are identified and accepted by the same receptors. Like two keys that fit the same keyhole.

CB1 receptors, which form part of the endocannabinoid system, are activated or are designed to recognise and capture THC and anandamide. These receptors are found in the central nervous system and their concentration is particularly high in certain parts of the brain. When they recognise and capture THC, what happens is that we experience that intoxication that we associate with cannabis, which we know as its psychoactive effect. This is because these receptors are located in areas of the brain responsible for coordinating motor and cognitive functions.

When it comes to CBD and 2-AG, on the other hand, it has been observed that these two molecules activate CB2 receptors, which are distributed mainly in the cells located in organs related to the immune system, and in the immune cells themselves. The function of the immune system is to protect us from any virus or bacterial harmful to our health bacteria, so we can imagine the endocannabinoid system (closely related to it through the CB2 receptors) as a kind of "sentinel" of our health, in charge of protecting us from anything that may affect our functional balance.

Tanja Bagar notes that currently Science has managed to discern that both phytocannabinoids (which come from the plant) and endocannabinoids, are not only captured by the CB1 and CB2 receptors, but also "fit" with many other receptors, which is why they affect our whole system in such a major way. It has been shown that the endocannabinoid 2-AG also affects the receptors of calcium, of certain nutrients and serotonin, thereby influencing the assimilation of these substances in our bodies. The density of the cannabinoid receptors in some brain areas is very high, and the scientist says that if we look closely at a brain cell, we can verify that it contains many more receptors for cannabinoids than for any other substance.

Why are our brain cells are so "interested" in identifying and receive cannabinoids?

Tanja Bagar notes that, after much research, it has been possible to determine how the endocannabinoid system works: that set of CB1 and CB2 receptors distributed in our bodies, through its interaction with endocannabinoids and/or cannabinoids, affects various bodily functions, such as:

The role of the endocannabinoid system in our bodies is to ensure that this works in homeostasis. Homeostasis entails the different biological processes that our body carries out so that all its different areas function in harmony and a healthy balance is maintained. In short, homeostasis involves the tendency of the body to maintain balance and internal stability.

Let us take an example to better understand what exactly homeostasis is: when a virus attacks our body, destabilising us and making us sick, different systems are activated to launch a series of processes (fever, sweating) in order to combat the virus and rebalance all our functions and organs as soon as possible; that is, to restore homeostasis and ensure the proper operation of all the components making up the machine that is our body.

This is how cannabinoids affect our happiness: through their interaction with various receptors that govern bodily functions like: