The pros of home growing

I decided to grow my own marijuana after seeing different pain specialists at various hospitals to no avail. I had tried it all, even opiates, but cannabis is the only treatment that seems to help with my migraines. I tried marijuana because a friend of mine had described it as 'a silver bullet', and I must admit the effect was almost immediate. The only thing was that, as a non-smoker, I didn't like the idea of having to smoke joints. Plus, my friend's weed was really strong and long-lasting. It was soothing, no doubt about it, but it also kept me from doing anything else, even driving.

Then, during a trip to Switzerland, I tried CBD-rich weed - medical cannabis is legal there - and I also discovered the benefits of vaping. The problem here was the price - more than ten euros per gram - and also the distance, as I live more than 200 km from Genève. And considering the assaults, the scums and the police controls, resorting to the black market didn't sound like a good idea at all.

This is why I came up with the idea of using my garden even if I have no growing experience whatsoever - I've never grown cannabis or anything else. In any case, the first thing to take care of was the seeds, which I bought online. Having calculated that I would need about 100-200 grams per year, I though a five-piece pack would be more than enough.

At present, Dinafem is one of the few seed banks that is committed to developing therapeutic cannabis, and as I was completely at a loss about which strain to choose, I decided to contact them by phone. I was asked all sorts of questions - whether I was an indoor or an outdoor grower, the area I live in - and was finally recommended Early Amnesia CBD, a strain Dinafem seems particularly proud of. Five days later, on May 2, the seeds arrived in my mailbox.

The vagaries of nature

As soon as I got the seeds, I started them in yogurt pots with a soil mix I bought from a nursery and that was supposed to help with germination. Only four seeds survived, though, and I then realized that I had given them too much water, causing the fifth seed to drown and lose all its nutrients. I left the remaining seedlings to mature for twenty days and I then moved them moved them to the garden - I chose a spot surrounded by nettles as, apparently, they're a sign of fertility.

For the holes, I got help from a professional gardener, as clearing the ground isn't something you can just improvise. I told him I was planning to grow tomatoes and he found the dark, fertile soil of my south facing spot to be perfect for my purposes. I allowed about a metre between the plants, although it proved insufficient over time.

Two of the seedlings disappeared without a trace one night and, after much though, I came to the conclusion that it had to be the snails or the slugs, so I protected the surviving plants with a granular product. And sure enough, the next morning, there were quite a few corpses lying next to the granules. Had it not been for the treatment, the plants would have been devoured.

Luckily, Early Amnesia CBD is a hardy strain that grows amazingly well. By the end of June, though, the growing period had reached that delicate moment when the slightest gust of wind can ruin your whole crop - in my case, the two plants on which I had pinned all my hopes - and, in fact, on July 14, when the plants were 1.70 metres tall, a storm broke the stem of one of them. And much as I was desperate, I didn't have the heart to cut the damaged branches.

Surprisingly, two days later the branches started to grow towards the light again. In order to ease the process, I supported them with bamboo stakes and although I didn't really manage to recreate the original shape, at least I didn't lose the whole plant. Far from it, little by little the plant resumed growing, producing new branches that came out as if nothing had happened.

But the next problem was not long in coming: my two plants became huge, growing to massive dimensions. The undamaged one reached three metres in height, rising conspicuously above my garden wall, while the other one expanded horizontally: a green mass of branches and buds that took up six square metres of space.

Flowering didn't come until mid-August, but once it started, the buds sprouted incredibly fast. I had to wait until early October for harvesting and, to be fair, I was overwhelmed by the result. I don't have any scales so I couldn't weigh the buds, but I spent a whole afternoon trimming them. I discarded the ones that had grown in the inner part of the plant and I just kept the best-looking ones, which I stored in the same jars I use for my cherry jam - you can store about 30-40 grams per jam almost indefinitely.

The buds are highly aromatic and resinous, giving off an intense musky scent that reminds me of other strains I'd seen before. As expected, the effect is soft and relaxing, and works wonders with my migraine: the pain and the discomfort disappear almost instantly, giving way to a feeling of relief that never ceases to surprise me. Now I'm never without my vape pen and a few grams of weed, a winning combination when it comes to keeping my headaches at bay. When a 'drug' is as effective as this, it's hard to understand why it's not treated with greater respect and consideration. 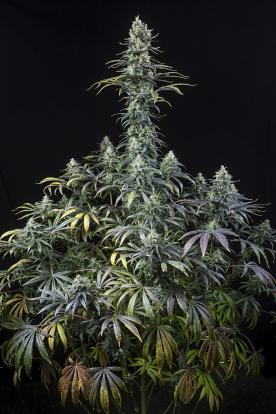 Ganja Farmer I am an aeronautic industry engineer who lives near Lille (northern France). I have been growing outdoors in northern climates for the past twenty years. Growing different kinds of weed in the nature is a passion. Great admirer of our plant for its beauty, its majesty and its effects (recreational and therapeutic).