Carnival is, increasingly, a global festivity, celebrated in different ways all over the world. In Brazil the sounds of samba can be heard everywhere, in Cádiz parades and chirigota folksongs fill the streets with laughter, while in Cologne Germans enjoy the colours of their "fifth season" of the year. At this celebration, in which fun is combined with activism, cannabis just had to be there. If you still don't have an idea for a costume, and would like to seize this opportunity to proclaim your love for cannabis, here are some suggestions that are sure to turn heads.

If you're a bit of a handyman, it's best to start with the simplest stuff. Maybe you're smoking or growing, and just then a little light goes on, telling you that the idea for the costume you wanted is right in front of you. A bit of fabric here, some paint there, you make a tube that's not too long, paint the tip with a touch of green, and you're all set: a bong costume, sure to get plenty of attention. 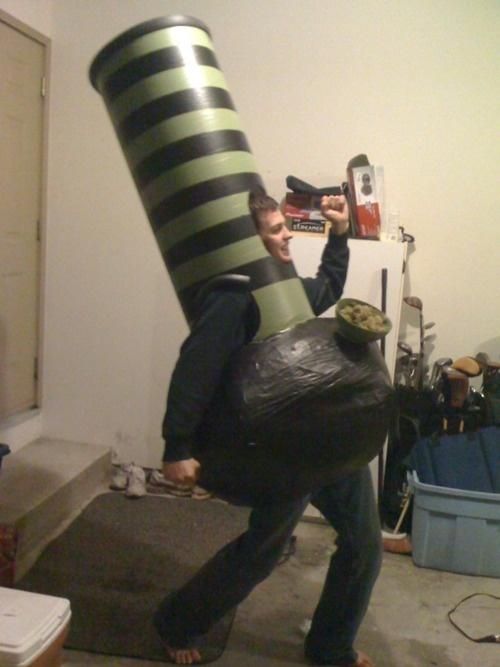 If you prefer to smoke the traditional way, you also have several costume ideas to consider, from the simplest versions, like a lighter with a spliff made out of cardboard, to a bag full of buds, a classic at costume parties that is also easy to make. Of course, you can also take it to more professional levels, like a rolling paper disguise.

Yes, we know what you're thinking: dressing up as smoking paper is extremely complicated. Well, not if you just replicate the design appearing in the Zig-Zag logo. It's essential that you carry the original paper too, so as to make the similarity clear, and keep from being mistaken for a brand of carrots.

You might also be overcome with some carnivalesque inspiration just when you're taking care of your cannabis crop, in which case, there are multiple options, though not all of them are of the same level of difficulty. A simple and very convenient option is dressing up as a cannabis leaf. With a bit of skill and patience you can enjoy some very good results with very little effort.

You can also go for something more complex, like a pot costume (pun intended). With scissors, glue and a bit of proficiency with foam rubber, you can replicate the recipient in which your plants grow – though you'll have to be careful not to be mistaken for an ashtray, and end up with a head full of cigarette butts.

If you want to go out there and turn up the mystery level, you can always totally cover yourself up with a bud costume, sure to be a big hit at whatever costume party you go to, not soon to be forgotten by all the attendees – especially if someone has to sweep up after all the green fuzz you leave wherever you go.

You may want to go as a diva, while at the same time promoting the legalisation of cannabis, in which case you also have options. Whether transforming into Lady Gaga or the sensual Rihanna, you'll have an ideal costume (provided you have the body to pull it off, of course). If you start singing, however, you're probably going to shed all the glamour you had generated with these cannabis dresses, only fit for the most daring.

But it's not just music stars that can give you ideas to stand out at this carnival. In the movie world you can also find ideas for the makings of a great costume. For example, if you're going with someone else, the two of you can dress up as Cheech and Chong, the comedy duo of Richard "Cheech" Marin and Tommy Chong, whose films revolved around the hippie and cannabis-based lifestyle. Or as stormtroopers, from the Star Wars universe. Now you might be wondering: "What on Earth does that have to do with cannabis?" Nothing. But it sure looks cool. And you can camouflage yourself in the forest.

You might be better off playing it safe and going as an authentic champion of the rights of pot lovers, with this Superganjaman costume, every bit as dazzling as that of Captain Cannabis, an outfit with superpowers. Or even that of Mr. Bud, a new concept that is catching on: warmer, but also more discreet, for those who embrace their shyness.

If you really want to play a fictional character, you can sport a version Batman's nemesis Poison Ivy. Just add to a short miniskirt some cannabis motifs (you can always resort to the classics), with plenty of green. And, if you want to spice it up even more, get hold of a giant spliff to add some more sensuality to the equation, if that's possible.

Television can also serve as an inspiration

The tube is also a good place to dig up ideas for this special holiday. Check out this Shaggy and Scooby costume, which perfectly captures the stoner persona portrayed in the famous cartoon series. Or Towelie, from South Park, which can be nice and warm for these winter days, though it might leave you wondering: how the hell do I smoke in this thing?

To surprise television crews there's nothing better than this pothead Bigfoot, aka "the incredible bud man." Jennifer Pagliel, a meteorologist with an American television channel, experienced the most surreal direct broadcast in her life during a connection with the studio, as the reporter began to describe the weather in the city of Springfield, Massachusetts. Suddenly, in the image there appeared a mysterious creature image covered in cannabis that Americans have dubbed as the "Pot Sasquatch." Certainly a very apropos costume to be a big hit at Carnival time. The video has gone viral, viewed by millions of people around the world.