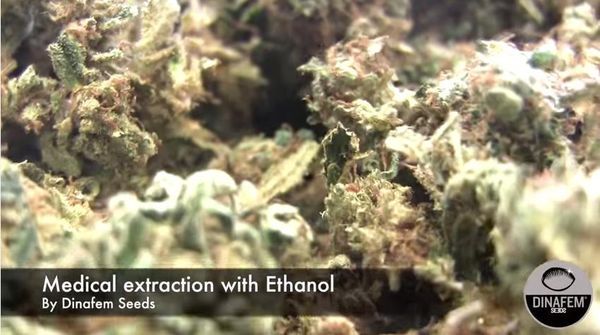 The most common way to obtain cannabis oil is through different types of extraction, which is getting cannabinoids with the most suitable solvent. These cannabinoids are insoluble in water but can be separated very well in certain organic solvents such as butane, alcohol or fats.

Butane is usually recommended because it gives good results and high yields, but there are many different classes of it and getting good quality gas is often difficult (while somehow dangerous). For its part, absolute ethanol is very effective due to its purity, because it will draw unwanted components such as chlorophyll (which is a good proportion of the weight of dry grass) and because it is much more manageable.

Here's how to make a cannabis oil extraction with absolute ethanol. Specifically, we will focus on medical cannabis high in CBD. Keep in mind that for every hundred grams of marijuana that we use we will be obtain about eight grams of oil, half of them cannabinoids.

For this extraction in particular, it is necessary to have marijuana Critical Mass CBD, a feminized strain, especially indica, coming from the union between a Critical Mass and a male CBD Crew. It is the medical version of the Critical Mass, which is often used to alleviate the side effects caused by the treatment of some diseases.

It is important to keep in mind that ethanol is flammable, so it is necessary to take every precaution. In addition, it is advisable to carry out the process away from home, outdoors.

Liquid ethanol with a 99.99% purity will be needed along with a mesh of 45 microns, where cannabis will be placed. Typically, the objective of any extraction is to obtain the best of the poor-quality grass we have, but in this case it will be the opposite: the aim will be to obtain material from plants of the highest quality, by quickly passing the uncrushed buds through the solvent, since a high concentration of cannabinoids can be found in the outside part of the flowers.

To begin the process, the liquid is placed in a container which is open at the top. Then, the grass is placed into the mesh. After closing the mesh, it is introduced into the solution for about 30 seconds. It is important that the "washing" of the plant material does not take any longer, as too much chlorophyll would be drawn, along with other components that would damage the properties of the extract. In this respect, it is usually recommended to also cool the ethanol.

After this period of time, the bag must be removed and the liquid slightly drained. A greenish mixture is obtained, formed by the ethanol and the remains of the plant that has been used. 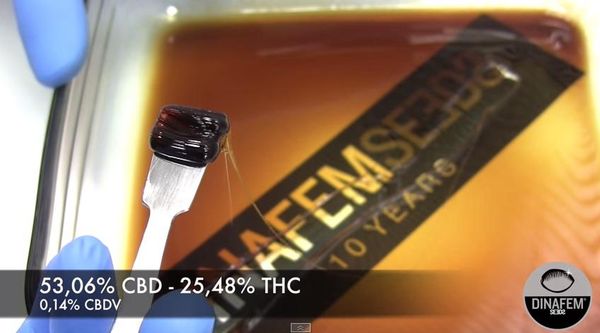 The solution is ready to be filtered. We will do so with the help of a funnel, a filter and a flask. This way, the particles that are not suitable for the final product are removed. It is probably necessary to filter again, because some plant particles may have slipped in.

Once completed, the result must be poured on a tray, in order to facilitate evaporation of the mixture. This can be accelerated by introducing the container in an oven at low temperature as long as needed, but not beyond that (it is better not to exceed 40 degrees), so that the product does not lose its taste or aroma.

Finally, the oil must sit for 72 hours. After that it can be seen that the liquid, which previously almost overflew the tray, has now been reduced and become a kind of thick, dark brown, hard honey-like oil.

This medical cannabis oil reaches about 53.06% of CBD and 25.48% of THC, although results will depend on each case and the strain being used. As with any type of extraction, it is recommended to store the product in a dry, airless, cool and dark place, such as vacuum or airtight containers. Thus, the medical cannabis oil with CBD will retain all its properties, will not be infected by any external agent or rust by the action of air.