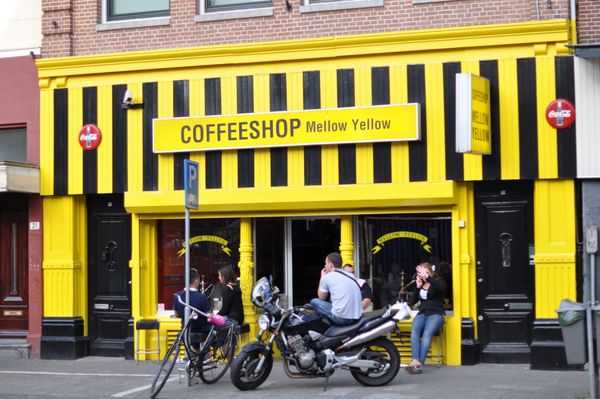 Mellow Yellow opened in 1973 when a group of friends decided to occupy an old bakery in the city of Amsterdam to carry out a mission that seemed apparently crazy: to open a tea room where customers could buy and consume cannabis and hashish. Against all odds, the experiment not only succeeded, but became the beginning of a fruitful movement that would transform the city forever. Its founder, Wernard Bruining, borrowed the title of a song by the Scottish Donovan in which he referred to smoking banana peels, to baptize the premises and wink at his customers.

This was how the first coffee shop in the world began to work, a project that was made possible by a very particular political and legislative framework. At that time, heroin had become a serious problem in the Netherlands; cheap and poor quality drugs flooded the streets, creating a serious threat to public health. With the objective of ending the ravage this was causing especially in the capital, the new Law of Opium was implemented, which distinguished between hard and soft drugs. This is how cannabis was classified as a soft and decriminalized drug.

Not surprisingly, within this favourable context, Mellow Yellow flourished at a dizzying pace, and what had begun as a way to spend time with friends soon became a thriving business that set a precedent. The proliferation of coffee shops in Amsterdam did not wait, and the city soon became a symbol of European progressivism. During that time and due to its popularity, Mellow Yellow even had to set time limits for its customers.

However, some projects die of success and that is what has happened to the coffee shop movement of the Dutch capital. Offering a product that is illegal in most countries in the world has for decades attracted millions of foreigners, a cannabis pilgrimage that has saturated the city of Amsterdam and turned it into the Disney World of marijuana. The so-called "drug tourism" has been too much for a city that has 800,000 inhabitants but that in 2016 received more than 5.2 million tourists. This is how, in recent years, while marijuana has been regularized in other countries, laws in the Netherlands have tightened in this respect.

A decision by the government which for many has meant a setback as a result of the legislative limbo in which the Dutch cannabis movement has floated during the last decades, since in the Netherlands cannabis has never been fully regularized. The policy of tolerance should have been an intermediate step towards a complete regularization process that never came. The system was suspended in time, in a kind of "no man's land", in which coffee shops are allowed to sell cannabis but not to produce it, and therefore are impelled to buy it in illegal distribution networks.

A new legal landscape plagued by restrictions for coffee shops that has forced many of them to pull the plug because they cannot comply with the new ordinances. Today the spearhead of a phenomenon that for decades has symbolized hope and freedom for the cannabis movement has followed their steps. Mellow Yellow says goodbye after 43 years of intense activity because it is located 230 meters (and not more than 250 as the new ordinances establish) of a training centre. From Dinafem we cannot think of a better tribute to it than to share with you the song that inspired the founder of this mythical place, that magical place where, last December 31, the last banana peels were smoked. Farewell, Mellow Yellow.