Quick, early, fast… There's no way you haven't heard of these strains yet.
Referred to in many different ways just to mean the same thing, many growers still don't have a clear idea of the meaning of quick when applied to a cannabis strain. Are they feminised? They are. Are they autoflowering? They're not. But they're faster, aren't they? Indeed. So, if I'm looking for something fast, why should I choose a quick over an auto? Well, let's take a step back and look at one question at a time.

Are quick strains feminised? Yes, they are

These strains are feminised simply because they're female. Put another way, they're cannabis plants that invariably produce flowers and not pollen - again, they bear buds because they're female - and whose flowering period depends on the hours of light they receive - in a 24-hour day. While the hours of light exceed the hours of dark, the plants will keep growing and won't flower. This is because feminized strains remain stuck in the vegetative period - growing taller and wider, taking root and developing branches -until there's a change in light exposure and they receive the same hours of light and darkness every day, at which point flowers start to bloom.

Are quick strains autoflowering? No, they're not

Autoflowering strains or simply autos are strains that flower automatically about 25 days after germination. The switch from the growing to the flowering period does not respond to a change in light exposure, but depends on the life cycle of the plant. This is why we recommend that you stick to the same light cycle (18/6) when growing an auto. Because of their ruderalis origin, autoflowering plants can't be kept in the growing period for longer than a month - they are programmed to start bearing flowers on day 30 at the latest. And, of course the production of buds will be in line with the size of the plant.

Are quick strains faster? Yes, they are

This is the greatest asset of quick strains: the quick versions of standard feminised varieties are simply faster than the rest. Generally, they are produced by crossing a standard light-dependent strain with an autoflowering, the result of which is an F1 "QUICK" hybrid plant that cannot be defined as an auto but which does develop faster. This is because its autoflowering genes, which produce a faster flowering period compared to light-dependent plants.

Why to choose a quick over an auto: because you want plants that are fast but also big

The advantage of quick strains over autos is that they allow growers to adapt the vegetative period to their particular needs. So, if you want to grow let's say a massive plant like those that are often seen on the US West Coast, you'll just have to keep it growing for three months, but with the benefit of knowing that the flowering period will be shorter than if you were growing the standard version. 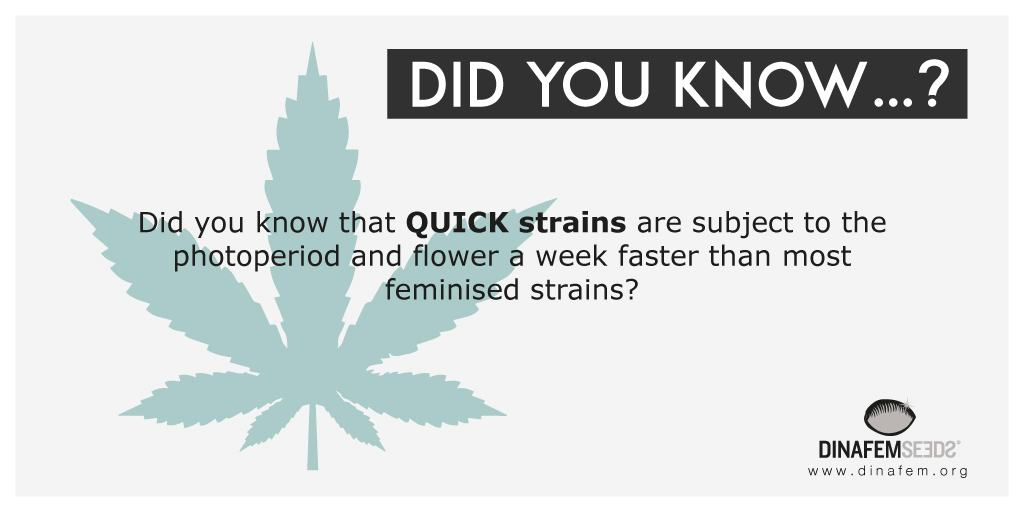