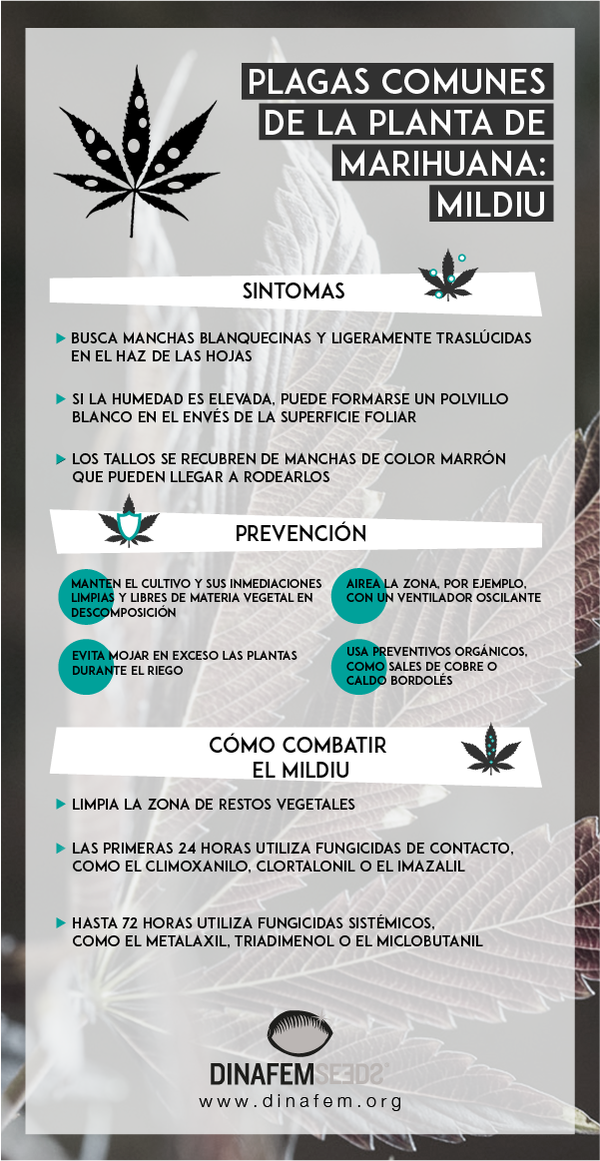 The plasmora viticola fungus, or downy mildew, appeared in Europe around 1878, introduced by the French when they imported phylloxera-resistant varieties of vine (a parasitic insect similar to an aphid) from America. The downside was that these strains were also hosts to the fungus, which today poses a serious problem for farmers.

These microorganisms also affect other plants, as the disease known as mildew is produced by a great many species, of both fungi per se and also pseudofungi (such as phytophthora infestans, which causes downy mildew on potatoes, or potato blight). Thus, in addition to damaging vines, potato plants, tobacco and pumpkins, among other marketable vegetables, these irritating intruders can wreak serious havoc on your marijuana plants.

How dangerous is it?

Downy mildew constitutes one of the greatest hazards for cannabis crops. The disease produces hyphal growth (something like the fungi's little branches) on the plant's tissues, in this way infecting its leaves, stems and even fruits. Unlike powdery mildew, another fear of growers, downy mildew does not remain on the surface, but rather grows steadily inside.

Because of this behaviour, characteristic of endoparasites, often one cannot detect its presence until the exterior parts of the plant exhibit signs of damage. Unfortunately, by this point the damage the intruder has caused is considerable.

How can I detect it?

You must be alert and carefully watch for symptoms. The main sign is the appearance on the leaves' faces of whitish or yellowish, slightly translucent spots. Also, if the humidity in the atmosphere is high, a white powder can form on the underside of the leaf. Here you must be especially careful, because it can be mistaken for powdery mildew. The difference is that, with downy mildew, if you shake the surface material a little, you will be able to see discoloured areas, also known as "oil stains".

If you fail to notice said sign, or have mistaken it for another deficiency or disease, the mildew will continue to destroy your plant. As autumn approaches the ugly spots, delineated by the veins of the leaves, will begin to gradually present colours ranging from yellow to brown and even white fluff if the moisture level remains high.

In the following stages of infection, the affected parts wither and die, resulting in an unexplained shedding of the leaves and, therefore, a reduction in the yield and quality of your cannabis crop. With reference to the stems, which also tend to be affected by the disease, they are covered with brown spots that can wrap around the entire stele. In advanced stages, the area ends up withering and dying when the infection is truly severe.

Perfect conditions for the fungus

Although the microorganisms that produce mildew proliferate more quickly under certain environmental conditions, they can also lie dormant (in a kind of voluntary coma) until they improve and they become active again. Hence, they often remain dormant in the winter and autumn, when they take the form of resistant spores, if conditions are extreme; or, if they are milder, mycelium, or shiro.

In the spring the microorganisms "mobilise" once again. These structures, which remained dormant, start to germinate when humidity increases and the temperature is between 10 and 25° C. Thus, when the temperature increases in the room where you have your plants (indoors), or that of the air (outdoors), the mildew's development accelerates. Some elements that increase the presence of water, such as sprinkler irrigation systems, rain, or dew, also favour the resumption of activity.

Based on these factors facilitating the development f the fungus, we can identify some risk factors in our marijuana crops. An abundance of detritus, water in liquid form, high temperatures, poor ventilation and limited light will make your plant an easy target for these destructive microorganisms.

The danger particularly increases if you irrigate generously, or there is fog, dew, or rainfall followed by warm days, as these conditions favour the fungi's germination. For all these reasons it is advisable to keep a close eye on humidity levels and the ventilation of your cannabis crops.

An ounce of prevention is worth a pound of cure

The main source of infection by these fungi is plant litter, where they can lie in wait to be spread by agents like the wind, water, animals, or even the grower himself, without him realising it. Thus, it is ideal to keep the crop and the areas around it clean and free of any detritus, to keep your plants healthy, especially if you have them in greenhouses or growing enclosures in which ventilation is difficult.

Another highly recommended practice is to make an effort to ventilate the area; with an oscillating fan, for example. It is also advisable to maintain an adequate temperature (whether from the sun or a thermostat), prune frequently, and separate plants to prevent excessive leaf mass.

Growers should avoid excessively watering plants (stop irrigation when it is not necessary, or reduce the volume of fluid that the crop receives) and overdoing it with fertilisers or nutrients. Growers are also advised to refrain from watering plants at night, or watering and then turning the lights off, because they help to evaporate the liquid, thereby minimising moisture. 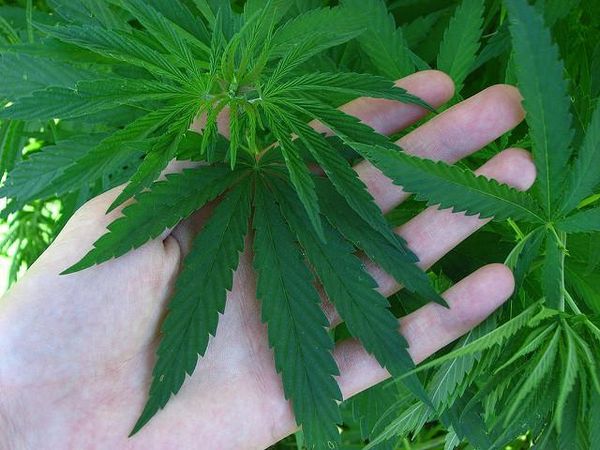 There are, however, some natural preventive treatments too. An example is the use of plants featuring antiseptic properties, such as chamomile or garlic, dissolved in water and sprayed on the plants. Fungicides, such as copper oxychloride and compounds known as dithiocarbamates are also commonly used for prevention purposes. Also very effective are organic preventives, such as copper salts, or a Bordeaux mixture (calcium oxide + copper sulphate), even today, as a fungicide by many farmers because of their effectiveness.

Solutions in the event of inevitable infections

If you have failed to prevent an infection by any of these methods, and find signs that your cannabis crop has mildew, the only way to prevent its destruction is to act quickly. After clearing the area of ​​plant litter, apply a specialised product to combat the disease.

There are several types of fungicidal compounds on the market, both to prevent and to eradicate mildew. These products mainly differ in the way they act: while some do so by contact (on the plant tissues) others are systemic; that is, they are applied only in one area, where they are absorbed and then distributed throughout the plant.

Contact fungicides, like Cymoxanil, Chlorothalonil and Imazalil, are usually used the first day after the first rain, or under other conditions that increase the risk of infection. Systemics, meanwhile such as Metalaxyl, Triadimenol and Miclobutanil, should be applied within 72 hours. In any case, it is very important to first read the instructions for the use of these chemicals, as their misuse could damage the crop or not produce the desired effect.

Mildew can become a real nightmare for cannabis growers. Although some infections cannot be avoided, it is best to do everything in your power to keep fungi away from your precious plants by adopting some of these techniques, which will not require too much effort.