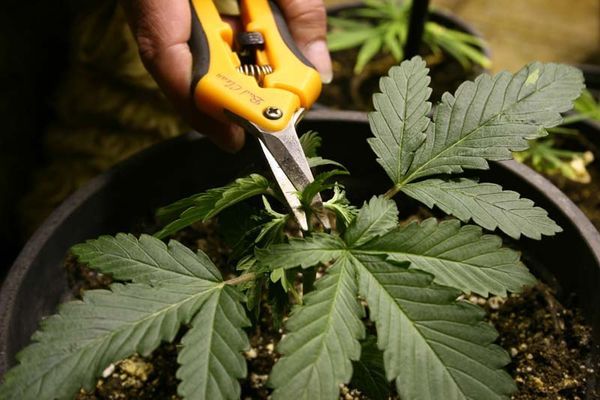 Marijuana pruning involves cutting some shoots, leaves or plants. This operation has several objectives, and the result depends on what you prune off the plant. By pruning the shoots, you increase branching and keep the plant short and compact. You can also prune marijuana by first removing the lowest branches so that the plant can focus its energy on the main buds. You should not prune marijuana leaves at all. Many marijuana growers think that if they prune the bigger branches, the cannabis plant can focus its energy on the buds. In reality, you have to keep a lot of things in mind in cannabis cultivation, like the fact that leaves produce nutrients that they distribute throughout the organism. If we get rid of them, the cannabis plant will lack nutritional content and will not flower properly.

Noting the pot plant’s main stem, you will see the newest leaves and a new shoot among them. If you cut this new shoot, the plant will produce two branches from the first node below the cut. The nodes are the points where the branches and leaves meet the main stem. If you repeat this process later, you will get four main branches instead of two. In fact, the shoots are the place where the marijuana plant develops and measures the duration of light. When days begin to grow shorter, the plant senses that it is time to flower because autumn is coming. If you prune late, it is very likely that flowering will be delayed, since the plant will not be able to measure the duration of light. A sure-fire method involves pruning the central shoot when the plant has four pairs of leaves, not counting the cotyledons that cover the seed. The plant will then produce two new branches and when it has another four pairs of leaves, you trim the shoots again. Thus, you will get four pairs of branches and the plant will be much thicker and more compact.

In some cases, delaying the flowering can be useful. For example, if you want a quick flowering male to fertilise a late female, you can prune the male’s shoots so it does not flower before the female.

The smaller branches that do not develop are pruned so the marijuana plant focuses its energy on the biggest branches. You need to cut the marijuana plant’s branches that receive little light and tend to atrophy. Some marijuana growers even keep the four or five strongest branches and get rid of the rest. Their plants then produce four or five enormous buds, thus taking up less space. While the plant has a lower performance, there is room for more plants, and the harvest is similar. Some leave only the main stem, without branching. These plants are then thinner and take up little space.

One of the countless beliefs about marijuana is that big leaves cast shade and cutting them is good for the buds. This is not only wrong but harms your plant’s health. The biggest leaves are foremost a factory of photosynthetic food and when they die, they are a reserve of chlorophyll. Throughout its life, the leaf produces sugars that serve to feed the plant and help produce its tissues. When flowering, these same leaves turn yellow and dry out, but they first send their chlorophyll to other parts of the plant. If you cut these leaves, the cannabis plant has to produce chlorophyll and cannot focus on THC, which concerns us all. It is best to let the leaves dry and fall off by themselves.