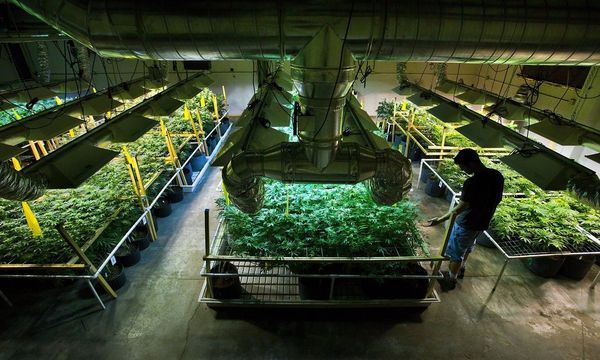 The truth is that, at least in the United States, marijuana cultivation consumes 1% of the country's electricity, which contributes to the rise of serious environmental problems due to the large CO2 emissions generated. This is mainly because most of these crops are grown indoors in order to go unnoticed and remain out of the control of the law in those states where cannabis has not been legalized yet.

Farmers usually use high-intensity lights that are 500 times more powerful than common ones. Some have even compared the energy these plantations require with that used by data centres (which account for 2% of the country's total), according to a study conducted by the researcher Evan Mills at the Lawrence Berkeley National Lab.

According to Mills the problems generated by the irresponsible and unsound cultivation of marijuana are many, and normal growing would not produce them. These problems range from using too much water to accelerate the plant's growth, to polluting it by using many pesticides, thus raising CO2 levels to four times what would be natural. 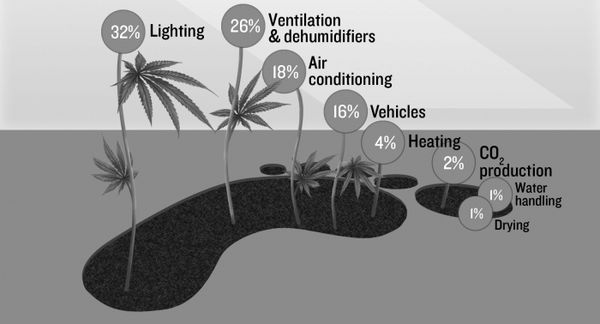 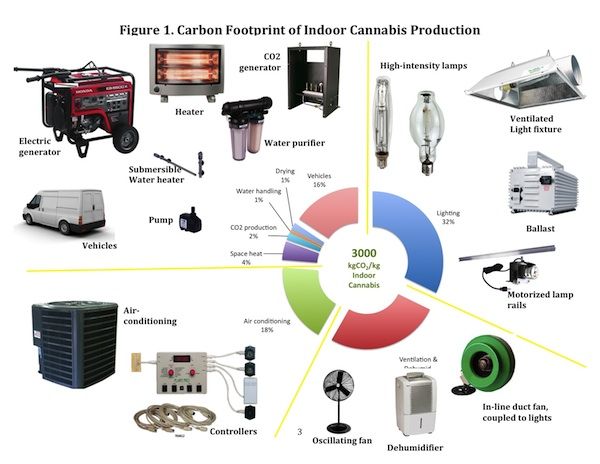 This is because while many US States allow the cultivation of marijuana for therapeutic purposes, some do so for recreation and although they should be all subject to federal law and supervised by the authorities, regulatory agencies do not oversee in a serious and effective way how growing is being done. Of course, this is even more so, in those states where cannabis is prohibited and cultivation is performed

This situation means that, only in the United States−although this could occur anywhere else on the planet–a joint ends up producing the same amount of CO2 emissions as a 100-watt bulb functioning for 17 hours, and the same impact on the greenhouse effect as driving a car for 24 kilometres.

This effect is only aggravated by the use of fans and air filters, required for indoor growing. The solution is very simple: the choice of growing outdoors, since outdoor cannabis plantations do not pose such problems, for they do not need so much energy for the plant to grow, and when managed properly they should not have a significant environmental impact. 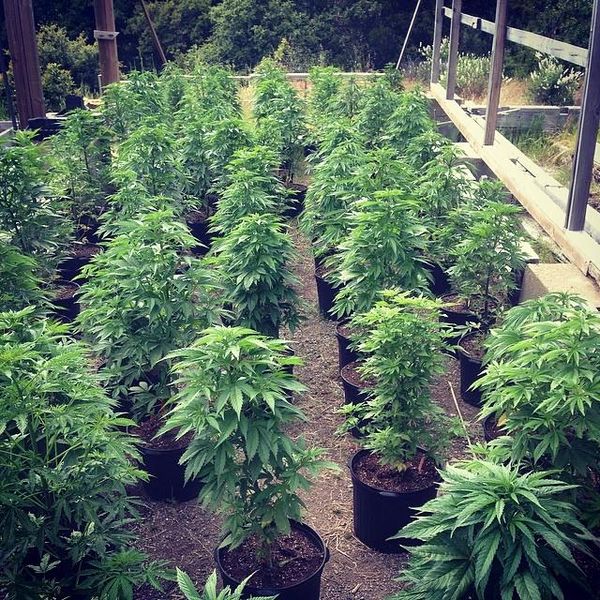 This researcher believes, however, that there are solutions for indoor cultivation. He explains that CO2 emissions can be reduced if metal halide lamps and high-pressure sodium lamps are replaced by simple and efficient LED bulbs. This type of bulb increases brightness to a surprising degree while reducing electricity consumption between 40 and 75% in comparison with those mentioned above.

While an HID o HPS may surpass 1,000w, an LED used for these crops does not exceed 440w. It not only manages to mitigate the way in which the environment might be harmed, but it is also discreet and, at the same time, it would result in significant monetary savings.

According to the experts, the quality and quantity of marijuana crops increase when this type of light bulb is employed. Why? Because heat usually degrades THC. By using them, the THC levels in each strain are much higher. Moreover, many of the LEDs used for cultivation often come with simple built-in fans that keep the atmosphere cool and prevent leaves from burning or dehydrating.

Furthermore, this technology makes the use of reflectors and heat extraction systems unnecessary and they have an average life of between 50,000 - 100,000 hours. Their most direct competition, HPS bulbs (sodium bulbs), need to be replaced every 5,000 hours. What's more, at least 2/3 of the light produced by HID−another type of high intensity bulb–is wasted, while LED bulbs allow plants to profit from 90% of the emitted light, leading to a more efficient photosynthesis.

Truliteled is one of the companies that promote the use of LEDs for any type of cultivation in "synch with Nature", from normal flowers to medicinal cannabis. Thanks to its product, this company commits to achieving reduction on electricity costs and nutrients consumption. According to them, their bulbs are different from standard ones, because "they do not overstate their power, like other competitors do."

"It is more necessary than ever for the production of marijuana to be legalized."

In the area of energy sources, writer Ariel Schwartz believes that the Mills report data mentioned at the beginning of this article represent clear evidence of the everyday more important need for legalization of marijuana production. And he recommends that the cannabis industry follow the steps of commercial agriculture, which "has achieved great progress in energy efficiency" in recent years. 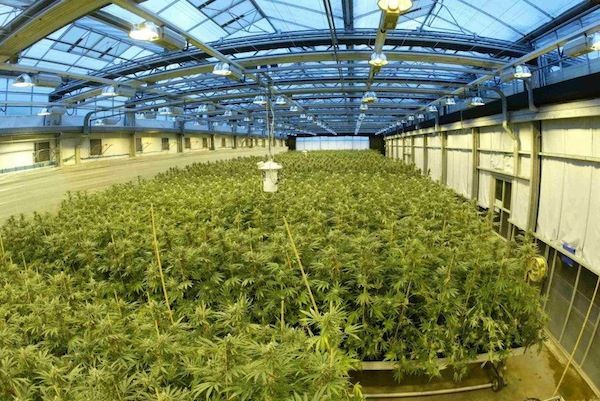 Even researcher Mills agrees with Schwartz. He also believes that criminalisation contributes to the proliferation of these dubious energy practices. Yet, there are also those who believe−like Joel Kretz, a Republican politician from Wauconda−that it is unacceptable to use clean hydroelectric, wind and solar power for a non-food crop, especially one that could be grown for recreational purposes.

Environmental activists and advocates for the legalization of marijuana believe that ending inappropriate cultivation practices is not just a political issue, but also a social one. It is from cannabis activists and consumers themselves that criticism should spring. And it should also be them the first to realize that, just like they would surely prefer to eat food that has been grown with solar energy, why wouldn't they also prefer to smoke marijuana grown with same natural and healthy source of energy?