When the Dinafem people are enthusing that a strain is "one of their favourite genetics", and that the entire team "became hooked on it", one pricks up his ears. After all, this seed company is well-known for top-shelve strain quality, so if one of their varieties gets highlighted that much and praised that euphorically by them, it must be something really special, something really exquisite.

That's the case with Dinafem's Purple Orange CBD, a CBD-rich strain with sativa dominance (60%), based on genetics called California Orange Diesel. The Dinafem breeders came across this plant in North California, it instantly fascinated the Spaniards with its extraordinary citrus/choco aroma. What followed back home in Spain was extensive selection work, with laboratory tests yielding that these genetics are able to generate chemotypes with a high CBD content. On which the breeders focused their work then, creating a stable strain rich in CBD that thanks to its attractive violet colours proved to be a real head-turner, too.

Purple Orange CBD has a THC/CBD ratio of 1:2, 5% THC are accompanied by 10% CBD. Which means that this strain does get you high to a certain degree, in a more gentle and subtle way than usual though. But its medicinal effects are in the fore, that specific cannabinoid profile is supposed to work against anxiety and muscle tensions, stimulate the appetite and act as a mood elevator. What contributes to the latter is Purple Orange CBD's epicure aroma that enthrals the user's palate with notes of orange, lemon and chocolate. About its cultivation properties, Purple Orange CBD plants are of medium size and characterised by an open multi-branch structure which helps prevent mould and allows for optimum light exposure to the buds. Adorned with strikingly orange pistils and lavish layers of resin, within a flowering time of 55-60 days this strain produces thick and tight buds accounting for rich harvests of up to one pound of dried flowers per sqm.

It's also a good candidate for outdoor cultivation, under natural light the plants may grow to heights of 3 metres and yield up to a kilo, finishing around mid-October. 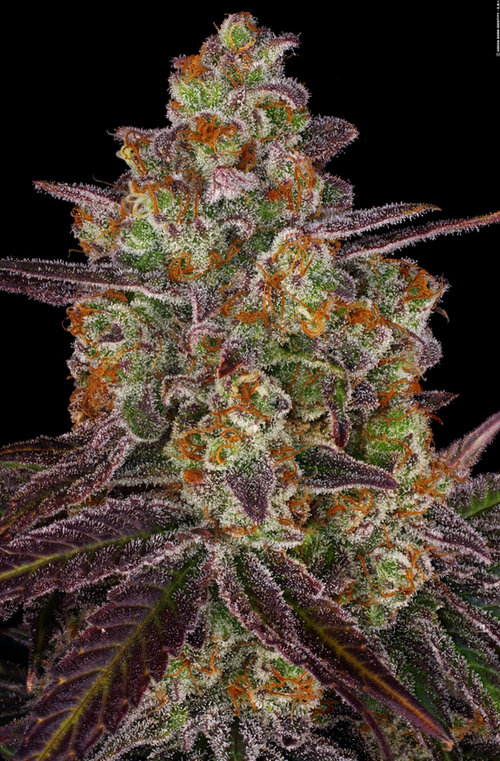 The veggie stage: An astoundingly high degree of uniformity

When he read this strain's description, Mr. Knolle's grower heart got captured by Purple Orange CBD and since he had intended to provide himself with an ample supply of CBD-rich weed anyway, he didn't hesitate to order some seeds. Whoop-dee-doo, four seeds went into the ground and within less than three days, the young seedlings had raised their heads on the surface. They obviously were in a hurry to get bigger as growth noticeably picked up speed as early as a few days after germination, and it didn't take long until lateral branching began in the axils. When Mr. Knolle ended the veggie stage after 3.5 weeks and triggered flowering by switching to 12/12, the four plants almost looked like clones - that extremely uniform they had grown, with heights of 29, 30, 30 and 31 cm. "Such an astoundingly high degree of uniformity I've never experienced with plants grown from a seed strain," he said deeply impressed. Also, the plants displayed an excellent growth pattern, nicely branched and compact, but with a canopy not too dense, just as described by Dinafem.Leaves were still green at that point, but Mr. Knolle was aware of the fact that the violet colouration of purple strains often doesn't set in before flowering.

As soon as one week into the flowering stage, female preflowers had emerged on all the four plants. The stretch effect during the first four weeks was a strong one, making the plants shoot up to over 70 cm. During this stage, a slight purple colouration became apparent for the first time, also extending to some older shade leaves, but mainly to new ones having evolved whilst flowering. The buds developed very well, after a month a thick corpulent flower cluster shape had emerged that was bulging further out week by week, eventually resulting in some whopping buds leaning towards the indica side. Resin production started early, with the calyxes and young sugar leaves coated in a dense trichome blanket. "Oh là là, this is going to be a pretty damn sticky thing," exulted Mr. Knolle as early as in the fifth week of flowering. "And presumably also a super fragrant one, because just yet the flowers are giving off an alluringly fruity scent."

A trichome-laden vision in violet-red, with a spectactular fruit bouquet

In flowering weeks six to eight, the buds put on even more weight and opened their resin gates to the max so that a true flood of trichomes spilled over them. That thick-layered silvery resin coat contrasted most attractively with the violet-red leaves and gaudy orange pistils, "that simply looks awesome!," Mr. Knolle rejoiced.

During the last weeks of flowering, the purple colouration had gained intensity, with the calyxes remaining green for the most part though. Until the very end, the four plants exhibited an unusually high degree of homogeneity, crossing the finishing line with heights of 75, 78, 78 and 83 cm. Their ripening time was pretty consistent as well – Mr. Knolle harvested all the four plants during the first half of week nine, in accordance with the time specification stated by Dinafem. The intense flower scent had culminated in a spectacular fruit bouquet, out of which - fittingly to the strain name - a distinct note of orange was sticking, seasoned with a dash of lemon and a pinch of sweetish tart spiciness that really evoked an association of dark chocolate. High yields of fancy looking buds with a yummy choco-orange flavour Owing to the buds' low leaf count, Mr. Knolle had an easy job of harvesting. Yields were as high as they were consistent as it turned out a couple of weeks later: the four plants tipped the scales at 69, 72, 77 and 81 grams. When he stuck his nose into a big preserving jar filled with dried Purple Orange CBD flowers, the incredibly yummy odour reminded him of bittersweet chocolate with candied pieces of orange – one of his favourite choices. 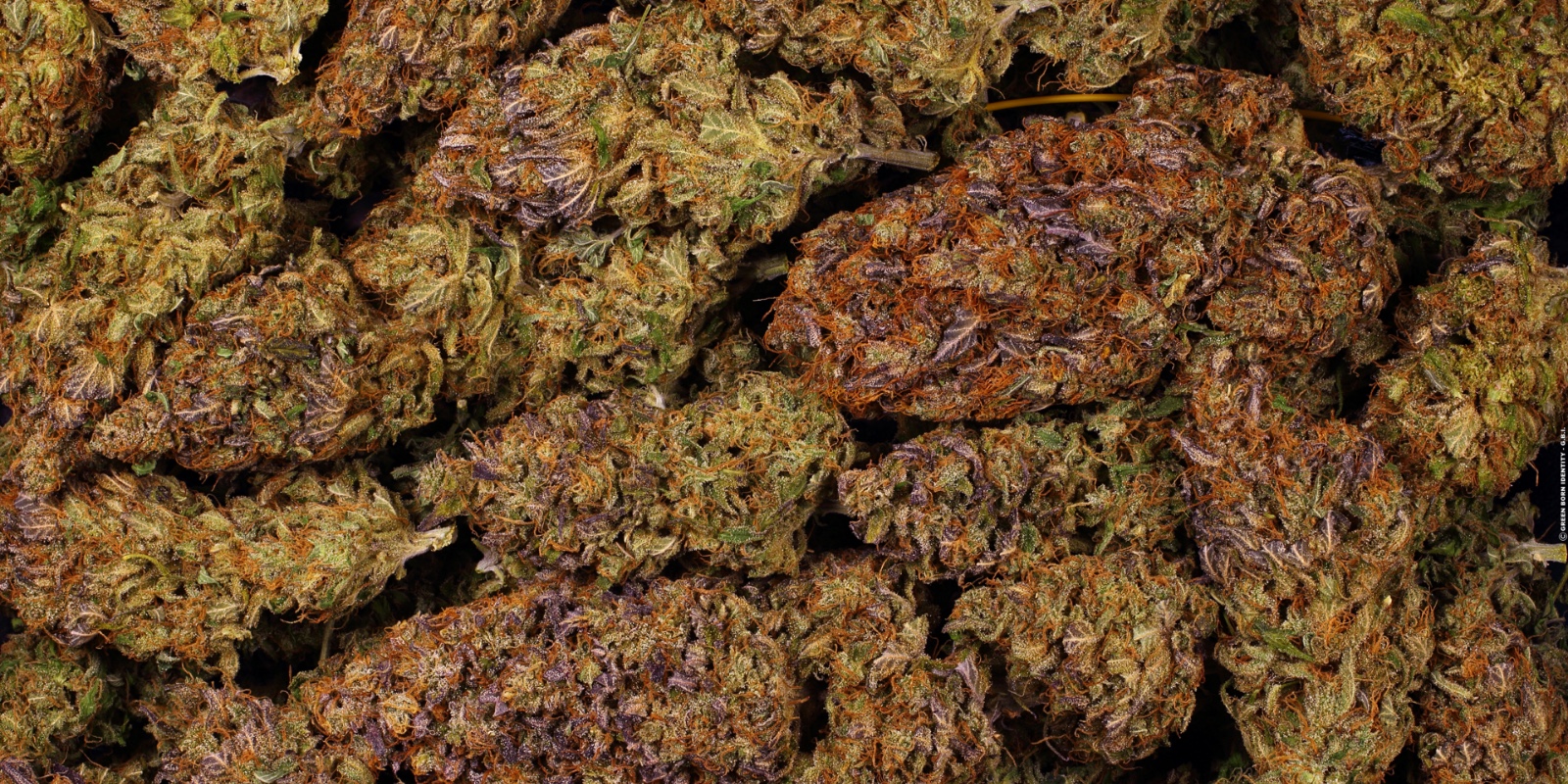 Another cause for rejoicing, that violet flower leaf colour had survived the drying process, giving the super frosty buds a fancy colourful look which promptly sparked a strong desire to smoke them.

Medicinally potent bittersweet orange chocolate in the form of smoke

More than willingly, he indulged this desire and rolled a joint with well about half a gram of Purple Orange CBD and some tobacco. "Man! Sniffing at this joint, it strongly smells of orange, quite amazing!," he said rapturously. And that special sort of fruit stick had a taste of the same kind then, it felt as though his taste buds were covered in bittersweet orange chocolate in the form of smoke, it was a unique gourmet flavour experience. After he had inhaled a few puffs, those 5% THC started to become more palpable than he had expected, making his head feel cottony soft and a bit buzzed. Which then led to a highly pleasant feeling of being internally balanced – something he ascribes to the benefits of CBD - which made him much more unconcerned and optimistic about certain issues bothering him. "Purple Orange CBD delivered a wonderfully mood boosting effect with a surprisingly long duration, way more than two hours. It's a great mental medicine! Dinafem hasn't gone overboard with their strain description, Purple Orange CBD is something very special, indeed, something very beautiful, tasty and medicinally potent. Truly a smasher of a plant which was also very rewarding in terms of yield. If I had enough grow room space, I'd grow her every time!", Mr. Knolle said in conclusion. 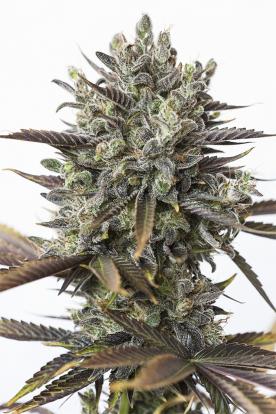