In the south of Madagascar, many plants can adapt to the environment in order to grow where others wouldn't be able to. But only really special types of plants can adapt to extremely dry and hot climates. One of these species is commonly known as 'Mother of Thousands', a succulent plant (from the Latin suculentus, meaning 'juicy') that is known scientifically as Kalanchoe daigremontiana, although it is still unclear whether this species belongs to the Kalanchoe or the Bryophyllum genus. The word Bryophyllum derives from the words bryo (sprout or grow) and phyllum (leaf), in reference to the small plantlets that sprout on the margins of the leaves, which is a characteristic of this genus. When the plantlets fall on the ground, they take root and thereby produce new plants that propagate endlessly.

This plant was first described scientifically in 1914 by Raymond-Hamet and Perrier de la Bâthie. These French botanists dedicated its name to Monsieur and Madame Daigremont, who were members of the French Botanical Society and avid plant collectors. But nowadays this plant is also commonly known as Alligator Plant, Devil's Backbone, or Mexican Hat Plant.

Mother of Thousands grows mainly during the short rainy season in the south of Madagascar. In optimum conditions, it can grow up to a metre and a half in height, producing thick triangular pointy leaves which are green on top and purplish on the underside. These leaves work as water reservoirs for the plant. As soon as the dry season arrives in the region, Mother of Thousands uses the water stored up in its leaves, which is enough to help it survive without rain for months.

The edges of the leaves are full of little notches with a special function: this is the place where countless reproductive shoots break out. These new plantlets easily come off, falling on the ground and forming new plants. This means that Mother of Thousands can even reproduce during years of scarce rain or no rain at all. 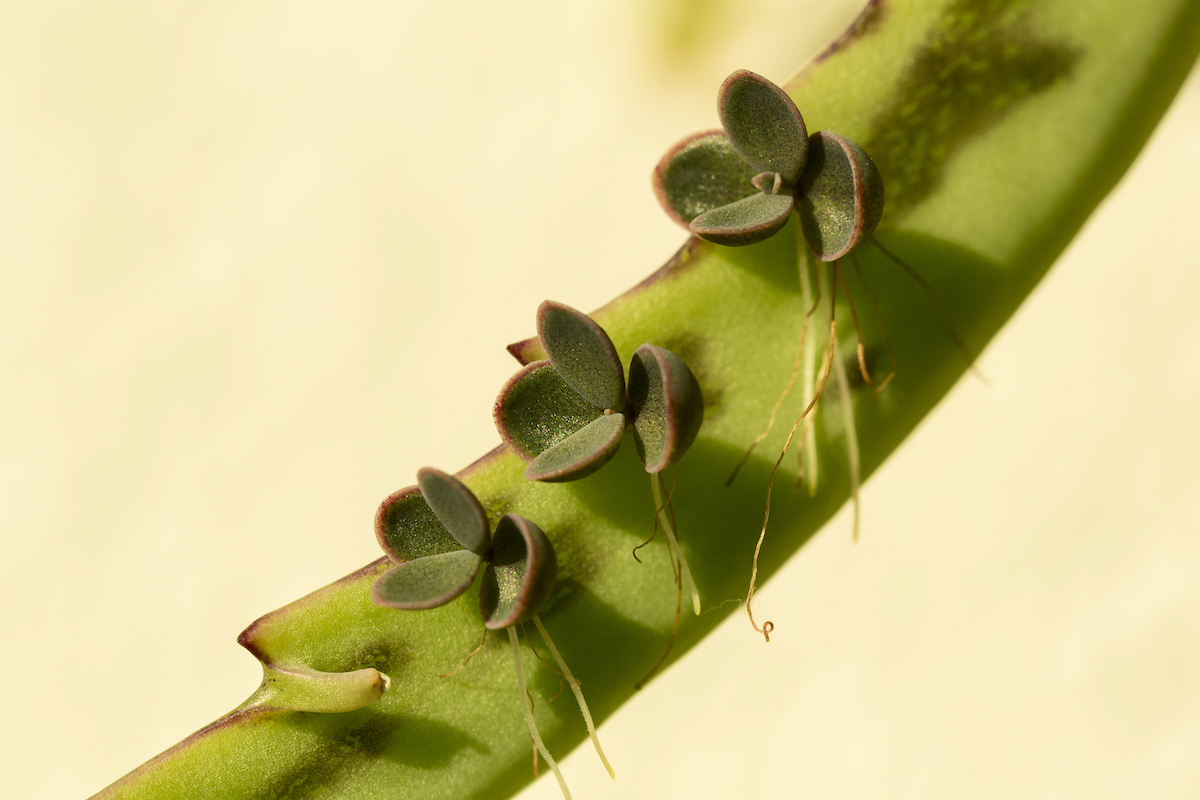 Adult plants may also develop lateral roots on their main stalk. Leaves tend to develop on the top part of the stalk, making it quite heavy and causing it to bend downwards. When this happens, the lateral roots can end up entering the soil and developing new primary stems that will eventually establish themselves as independent plants.

Due to its easy reproduction, Kalanchoe daigremontiana has been successfully grown as an indoor plant in other areas of the world. Domestic gardeners have applied hybridisation techniques to create a great range of shapes and colours of this wonderful plant. However, Mother of Thousands may inhibit the repopulation of native plants and modify the soil biology in some semi-arid areas, so this is why it has been catalogued as an invasive outdoor species in desert regions in countries like South Africa and Australia.

In areas with good rainy seasons, Kalanchoe daigremontiana can sometimes bloom sporadically, although this is a rare occurrence. A long stalk grows upwards from the centre of the plant and opens up like an umbrella with a bloom of countless beautiful bell-shaped flowers in pink or red tones that point downwards. When the plant is pollinated, it produces four little fruits per flower. These fruits fall to the ground, holding seeds of less than a millimetre in size. The rain decomposes the fruit and scatters the seeds on the sand, where they sprout, becoming independent plants. 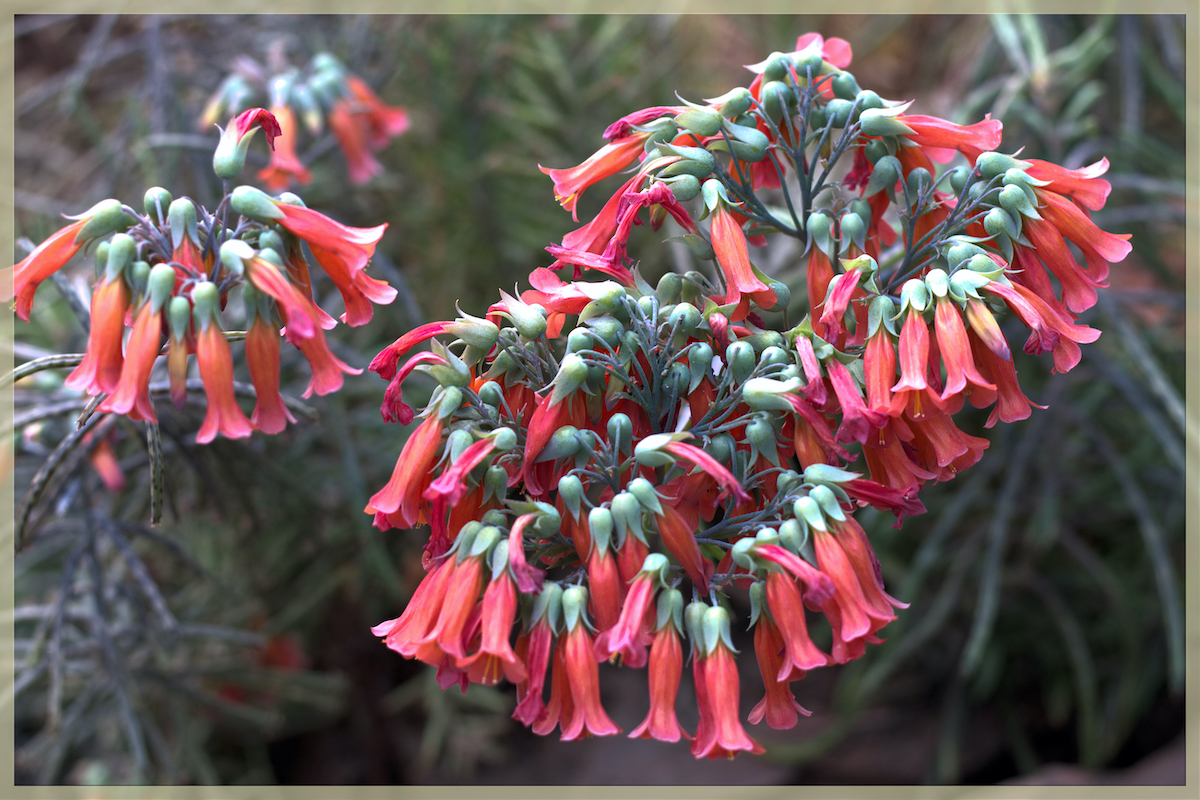 In order to be able to carry out photosynthesis despite the adverse climate conditions, Mother of Thousands has come up with a plan. Whilst most plants absorb and fix carbon dioxide during the day, this Kalanchoe plant photosynthesises via CAM (Crassulacean acid metabolism). This means that it absorbs and temporarily stores CO2 at night, before decomposing the CO2 and subsequently releasing oxygen into the environment during the day.

As a result of this intermediate storage, the pH value of the plant's leaves falls into the acidic range at night and only increases again during the day. The main benefit of this CAM mechanism is that the plants keep their stomata closed during the hottest time of day, which considerably reduces water loss through perspiration.

Therapeutic use of Mother of Thousands

Medicinal plants are still widely used in Madagascar, especially in the south of the country where modern medicine is still generally unavailable. Mother of Thousands is regarded as a traditional remedy against premature labour, and is also used in infertility cases.

However, the healing spectrum of this plant is very extensive: it is considered effective in the treatment of rheumatism, inflammation, high blood pressure, renal colic, diarrhoea, deep wounds, infections, burns, abscesses, etc. 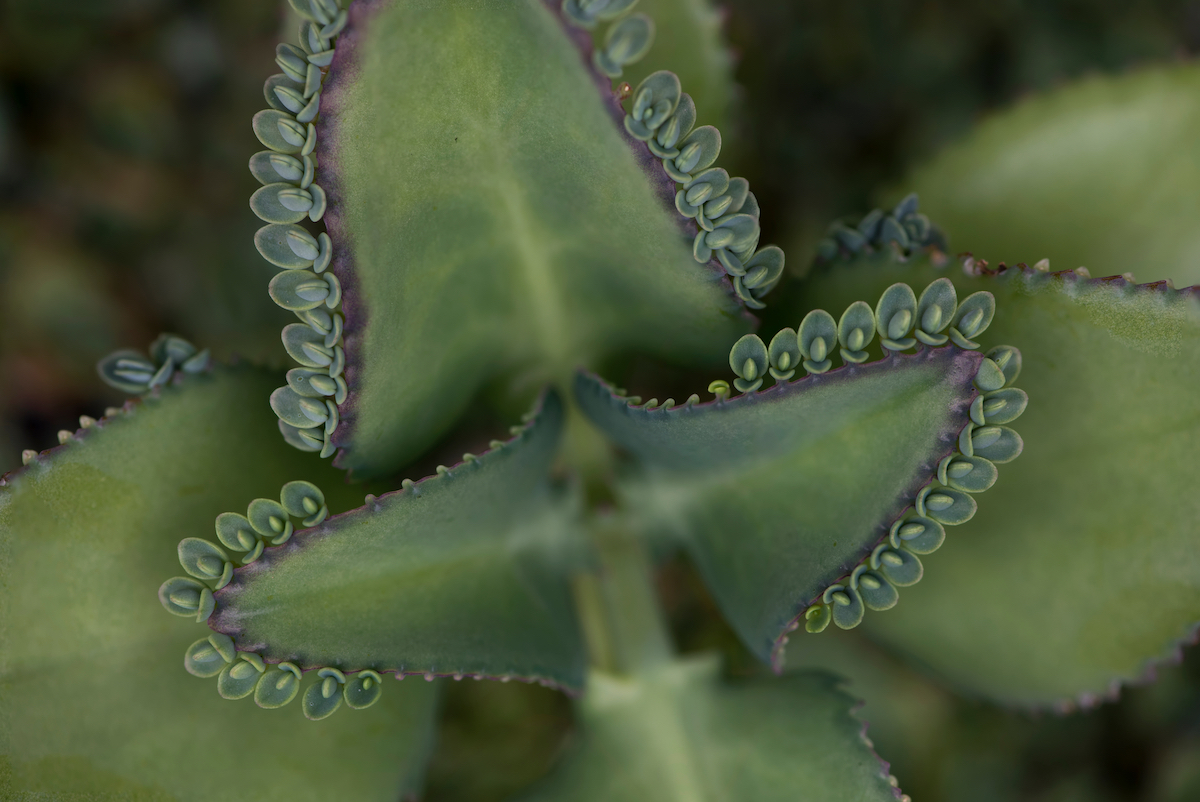 One of the chemical compounds found in this plant has attracted much scientific interest: this is bufadienolide, whose name derives from the toad genus Bufo, where it was first identified. Under certain circumstances, some bufadienolides have shown anti-tumour properties in both in-vitro and in-vivo trials. It must be highlighted, however, that to date in-vivo trials have only been conducted in mice, but with really promising results.

Nonetheless, these medical properties are a double-edged sword as they are not exempt from some risks due to the steroid daigremontianin. This is only one of the five known bufadienolides found in Kalanchoe daigremontiana, and its content in the plant's leaves is different for each plant. This 'poison' appears in smaller or larger quantities depending on the plant location, the water available, the season of the year, and on the makeup of the individual plant. Daigremontianin can cause heart and kidney failure if its concentration is too high. In addition, prolonged use, even when in small doses, can lead to chronic intoxication.

For all these reasons, Mother of Thousands can be regarded as an optimistic route for scientific and pharmaceutical research that might offer new treatments for diseases like cancer in the future, although to date its use is not recommended due to its toxicity levels.