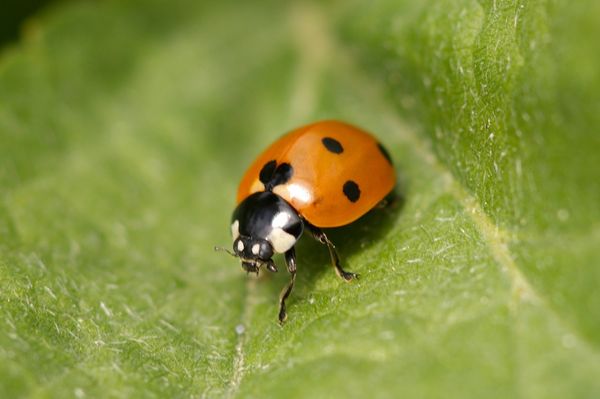 As surprising as it may seem, ladybugs can be great allies of our cannabis plants. Throughout their life cycle, it is common for any grower to face pests or marijuana diseases that, at times, can ruin our crop. Using the most natural solutions possible will be one of the keys of success in the survival of our plantation, allowing it to offer us its best quality. So, it is always good to resort to predatory insects to control pests and other problems arising from biological imbalances in the environment.

Coccinellidae, commonly known as ladybugs, can be found all over the world, with more than 4500 species described. Generally, they inhabit plants containing their preys, as they are predators of other insects and mites such as aphids or cochineal, so common in cannabis crops. Thus, with more than 100 species only in Spain, they become very active 'natural enemies' to safeguard the biological control of our plants.

This efficacy was officially certified in 1888 in California when, as a pest control technique, the first releases of the Australian-origin ladybird, Rodolia cardinalis, were carried out to kill the cornetted cochineal (Icerya purchasi) in citrus fields. The results were so satisfactory that it began to be used for other types of cultivation as well. Because, although forced introductions in cannabis plants are not 100 percent effective, a ladybug is so voracious that it can eat up to 500 aphids in a day.

In the ideal case, ladybugs would reach our infected cannabis crops by themselves. Of course, keep in mind that they will stay as long as there are enemy insects to feed on. Once they are done with them, their march will be good news: the plague has been eradicated.

Keys to introduce ladybugs in your cannabis crops

It is essential not to use pesticides that are incompatible with this type of micro fauna.

Nowadays, different species of ladybugs can be acquired in garden centres for the biological control of cannabis. With them, and in particular with the seven-spot ladybird species (Coccinella septempunctata), good results can be achieved; however, the greatest efficacy is obtained when the ladybug shows up spontaneously or even with second generations. For this reason, it is essential not to use pesticides that are incompatible with this type of micro fauna.

In indoor cultivations it is often difficult to establish colonies, while, outdoors, they can reach your cannabis plants at any time. Of course, they will always go to those who have more 'food', so it will also be an indication that something is not right in your crop and that you should be extremely careful.

It is also important if you buy them, to make sure that those you are acquiring actually feed on the plague you intend to eradicate; Contrary to what is believed, they do not eat everything. For example, those that feed on aphids can only be fully developed by eating these insects. Likewise, those who eat red spiders, such as the Stethorus punctillum, will not survive without them. That is why it is crucial to know what type of pest we have in order to introduce the most appropriate ladybug to eradicate it. 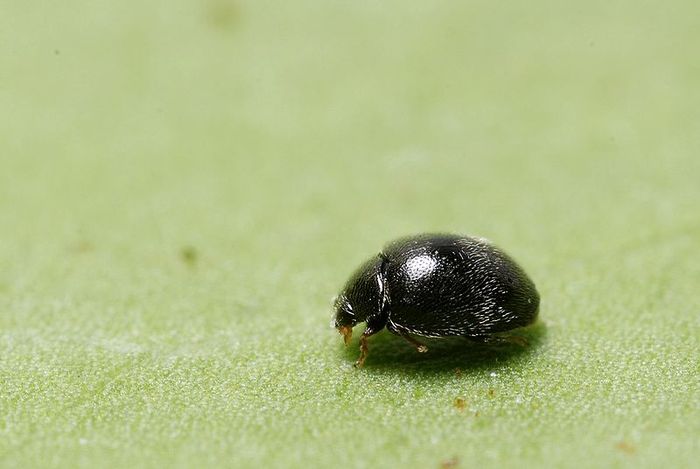 Caution! Do not forget that the ladybird is in your crop for food, so if it does not find what it is looking for, it will choose to go to other plants in search of food. Now, if you get the ladybirds to settle in your crop or surroundings, it will be important that you know how they develop to keep them always nearby.

What is the life cycle of the ladybug?

The life cycle of the ladybug is divided into four key states: egg, larva, pupa and adult.

The eggs are yellow-orange and are usually laid on the back of the leaves, in order to protect them from adverse weather conditions. Besides, you will usually find them in a group and near an insect plague colony. Thanks to their colour and size, about 2 millimetres in length, they can be easily seen.

When the eggs hatch, the larvae appear, which will pass through four different stages before they become pupae. The new-borns feed on the egg itself and can even eat other eggs that have not yet hatched. Generally, the body of the youngest is soft and elongated with darker colours than that of the adults; although this will also depend on the species we are dealing with. In this stage they don't have wings either, so they move by means of their three pairs of legs, which are longer than those of adults. As the different larval stages develop, the ladybug will grow in size.

Before becoming a pupa−its next stage of development−the larvae moult four times, one for each stage. The skin debris is usually left on the back of the leaves leaving a trace indicating their presence.

This is how it becomes a pupa. Then the ladybug stops being a larva and slowly becomes an adult as we recognise it popularly. In the course of this metamorphosis, the insect acquires its red hue with its characteristic black spots and begins to develop its shell along with the wings.

The length of an adult oscillates, depending on the species, between 1.5 and 8 millimetres. There may even be ladybugs that cannot be recognised as such, because a same species may suffer different types of colourings depending on their genetic variation and the climatology and geographical area where they are. Even so, watching them closely will soon convince us that they are actually ladybugs that will protect our cannabis crop.

How do ladybug populations develop?

When they get to our crops, they will not do so alone. Thus, it is essential to know how these insects behave as a group.

Ladybugs are insects living in warmer temperatures, which is why we usually see them in spring and summer. They are very sensitive to sudden changes in temperature, so when the cold arrives in early autumn, ladybugs enter a state of inactivity known in the animal world as diapause.

This should not worry us too much, because in greenhouses or indoor crops with warm temperatures, ladybugs will not hibernate; however they may reduce their activity during the coldest months. After winter, adults emerge from their lethargy and begin to nourish themselves. This is also when courtship begins for the subsequent mating. Once fertilised, the females will look for a place near the colony of the enemy insects to lay their eggs. This will guarantee them food. 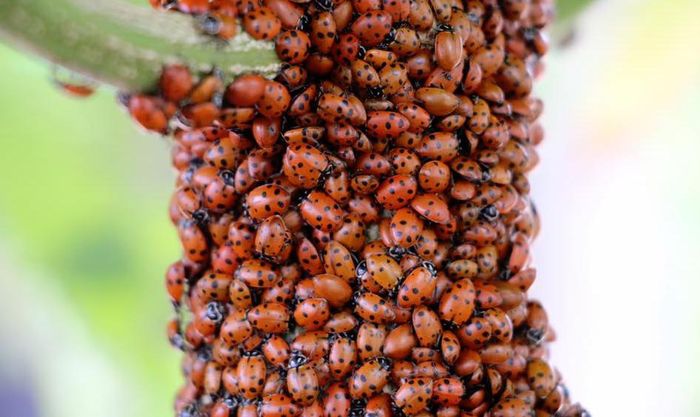 In this way, the development of the eggs and also that of the adults will depend on the species to be eradicated. If the prey population is abundant, the ladybugs will develop more quickly. However, population growth will not only depend on food; it will also be influenced by the host plant type and environmental conditions. Cannabis is not a good host for ladybugs when it is in its flowering period, except in the case of a plague, when it does appreciate their presence.

How do they attack their enemy insects?

Ladybugs feed on aphids, mealybugs, mites and other insects that can become a plague for cannabis. But, as we have already noted, not all ladybirds eat all kinds of insects and mites. These live preys will be of key importance for the development of their life cycle, although they can also survive feeding on pollen, nectar and molasses.

The ladybug, like other insects, has its own defence system. When molested, ladybugs secrete a very bitter yellow substance that is toxic to their predators. In addition, the yellow and red colours are a warning of poison for their possible attackers. This is what allows them to be safe and continue their predatory work in your cannabis crop. 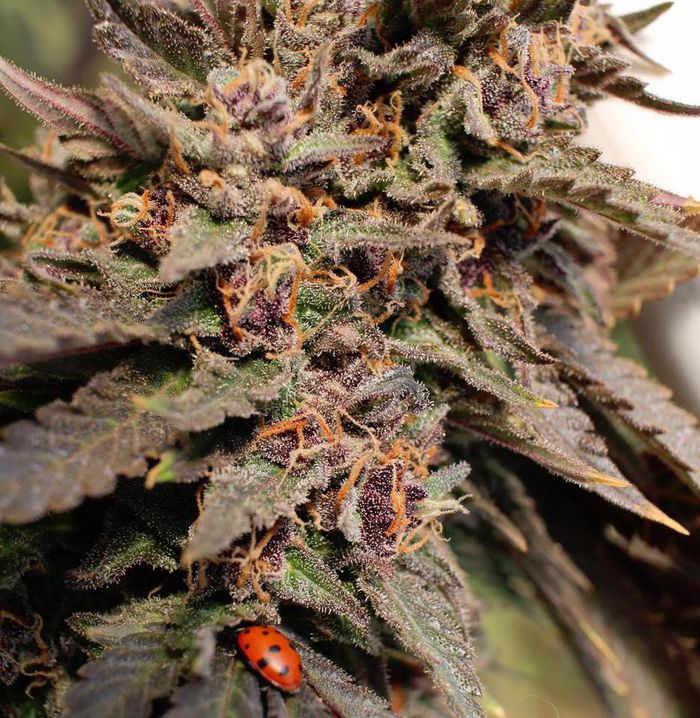 It is clear that ladybugs do a great job and that, very often, there is nothing better than letting Mother Nature do her job. Even so, it is important not to neglect your cultivation and facilitate their stay in the plant keeping them safe from fertilisers and other products that may harm them. In this way, thanks to these assistants and your experience, you will guarantee a great result in your next harvest.