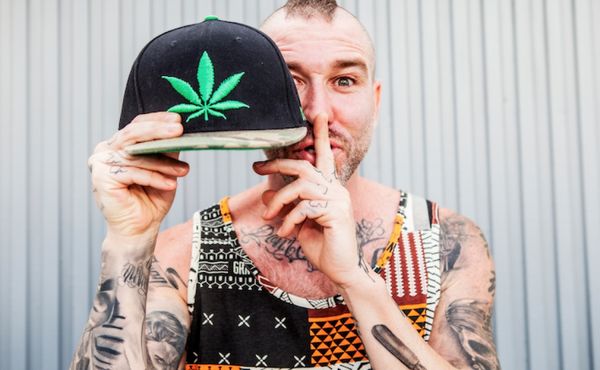 From music industry to the cannabis sector. What has prompted you to take this step?

We could say it has been almost by accident. It all started because I wanted to put up an association, but that did not come to fruition. Nevertheless, it allowed me to meet people in the industry and also people working in Positronik, who later proposed me to create my own range of marijuana.

Once I began to see the potential in the cannabis industry I decided to go headlong and got very involved in what I wanted it to be my own seed. I wanted it to be the type of marijuana that I like consuming, with the effects and characteristics that attract me.

So we could say that the seed is designed to your liking?

Yes, because when it comes to doing advertising I'm a bit special. If I am to sell something, it has to be a product in which I really believe. I cannot stare at your face and tell you that this is what I consume if it is not true.

I like it to be mostly sativa. I'm hyperactive and used to consume indica strains due to their powerful relaxing effect, but since I'm a father I don't sleep that much and I am usually pretty tired; that's why I now prefer sativa varieties.

When I'm under the influence of cannabis, a routine task like washing the dishes canbecome a source of inspiration.

Do you use cannabis to work?

To be honest, yes. When I'm under the influence of cannabis, a routine task like washing the dishes, can become a source of inspiration.

Have you ever used cannabis for medicinal purposes?

No, always in a recreational way.

Do you think that cannabis should be regulated in Spain?

Yes, especially because of hypocrisy. I want cannabis to be legally marketed, not only at a medical level, but also at a recreational one. I'll give you an example: when I am at home with friends consuming cannabis and my daughter shows up, she never see us in a deplorable state, saying or doing things that are out of place. However, at a family barbecue, it is very common that someone ends up drinking too much, the typical scene in which a cousin, uncle or grandmother falls to the ground and everyone laughs and the next day that person has a terrible hangover. That is socially accepted, because alcohol is a legal drug, however marijuana is not. I think this is a bit hypocritical.

Cannabis has proven to have many medicinal properties, why do you think it has not yet been regulated and officially applied in the field of medicine?

I really don't mess up too much with the medical issue because I don't understand about that, but I think that the regulation of cannabis in general is like everything in life: money, interests. It's all about money. I don't know exactly what the crux of the matter is, because I believe that if cannabis was legal, it would bring along great economic benefits that could go directly to the state coffers instead of remaining within illicit distribution networks.

I guess there is more business with this model we currently have, I don't know. What it is clear to me is that in the end it is a matter of money.

I think a lot about this issue in particular, I have given it much thought ... I have even wondered if this is a "political" issue, because alcohol anesthetises the masses while cannabis opens their mind, and perhaps some are not interested in the mass reflecting too much on certain issues. That could be another reason. Nevertheless, I think that this is essentially a purely economic issue.

If cannabis was legal, it would bring along great economic benefits that could go directly to the state coffers, instead of remaining within illicit distribution networks.

Many young people follow you for your work as an artist ... What advice would you give to teenagers about marijuana use?

With regards to the use of any drug ... Being responsible or not being responsible ... It is best not to take any drugs, and if you can be happy without, that's perfect.

I have a strange struggle with that, the truth is that cannabis for me is a source of inspiration; all my songs have been written under the influence of drugs. However, on the other hand, I think that lungs have not been designed to inhale smoke, to smoke…

It is best not to consume, but if you do, do it with knowledge. Cannabis is not a harmless substance, it has side effects and it is important to minimize its risks. Listen to your body, our body is wise and sometimes sends us signals when something is not making us any good.

I also believe that, with age, people change their consumption habits, amount, frequency ... For example, in my case, I have given up alcohol completely, I think it is the most harmful drug I've ever taken, but that's my case, surely there will be other people to whom alcohol does them good; everyone has to find its own place and way of doing things.

The life of a musician, drugs, sex and rock and roll ... Or in your case, Hip-Hop. Does the topic correspond to real life?

Have you already grown your seed?

I'm not a grower, I'm an expert taster, but I'm not good at cultivating because I lack persistence, I can't pay attention to something for a long time, only music.