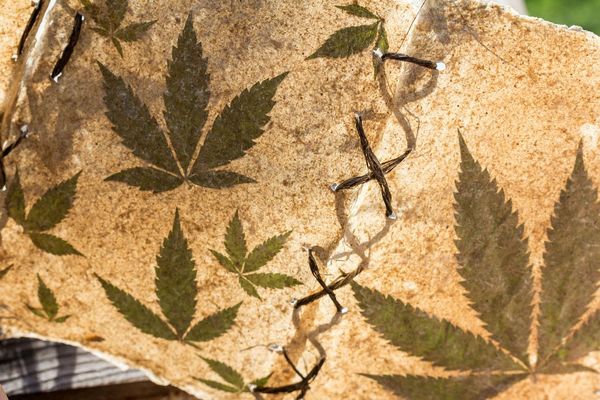 It is important to know the causes and background that have placed cannabis where it is in our society today, and to analyse and understand the changes that have occurred in society, and how they explain the consumption of marijuana and its derivatives today. While it is true that cannabis is one of the most consumed drugs today all over the globe, its role has changed over time. Understanding the changes in the paradigms governing its consumption is key to analysing the current situation and taking measures to minimise damage to public health. In this chapter we propose taking a journey into the past to take a look at the history of this unique plant.

As mentioned above, cannabis has had several uses throughout history. Understanding its applications will give us the keys to analyse our consumption and determine whether it is abusive and we are we exposing ourselves to certain health risks. Let's begin!

Before the phenomenon of globalisation, cannabis was already being used for other traditional purposes...To what uses has the cannabis plant traditionally been put?

Cannabis and religion? For many this may sound like a contradictory association, but throughout history many religions have used this plant as a "magical" element to facilitate meditation, and even achieve religious ecstasy. Hinduism is one example, in which cannabis is considered a sacred plant and one of its main gods, Shiva, consumes it. This use of cannabis to achieve a higher level of spirituality also formed part of other religions, such as Buddhism, Shintoism and Sufism. Traditionally cannabis has also been used by many tribes in Central and South America as part of mystical and religious ceremonies.

The textile/commercial and nutritional use of hemp:

The use of hemp to produce different materials, such as fabrics, rope, canvas and paper, dates back to ancient civilisations. It was used in China 10,000 years ago, and in ancient Mesopotamia (modern-day Iran and Iraq), where they have found hemp cloth dating from 8,000 BC. Thanks to its great durability, hemp has historically been a highly prized material in the textile industry, and there is archaeological evidence indicating that it may have been the first plant man cultivated for this purpose. Hemp seeds have also been traditionally used as food in different cultures due to their high nutritional content.

Cannabis was already being used in traditional Chinese medicine more than 4,000 years ago. There are treatises on medicine documenting this use, one of them the book Nei Ching, attributed to the Emperor Huang Ti (2600 BC), featuring different recipes to relieve and treat some diseases, whose ingredients included cannabis. In another text, attributed to Emperor Sheng Nung (1800 BC), both the therapeutic properties of cannabis, and its harmfulness if consumed in excess, are mentioned. Therefore, knowledge of the dual nature of this plant existed hundreds of years ago. The traditional use of cannabis for therapeutic purposes has occurred in different regions around the globe; starting from China, the therapeutic use of cannabis spread to other Asian regions, through the southeast and into India, where it has been used for centuries. Later, from the Orient it spread to Roman civilisation, which was responsible for spreading its use throughout Europe, although this did not last long; while in the Middle Ages the medical use of cannabis survived in the Middle East and Far East, in Northern Europe it gradually disappeared.

Throughout history and in different cultures, in parallel with the uses described above, cannabis has been used for recreational purposes too. In 485 BC Herodotus wrote in his History of the Persian Wars of how the Scythians used cannabis for recreational purposes, placing it on hot stones in a kind of sauna. In Islamic culture cannabis has also traditionally been used in a recreational way. Although there are no references to the plant in the Koran, and the Islamic religion does not permit alcohol consumption, there is no explicit ban on cannabis, which has resulted in the consumption of hashish, and a long tradition of the recreational use of cannabis and knowledge of its psychotropic effects.

In the 19th century cannabis was reintroduced into Europe (mainly for its therapeutic properties), by an Irish surgeon named O'Shaughnessy. Between 1842 until the early 20th century cannabis and its derivatives became part of the pharmacopoeia of many European countries, and the United States. The increased consumption of cannabis around the world exploded in the 20th century, however, and early in the century the first steps were taken to outlaw the substance. In 1961 the UN Single Convention on Narcotic Drugs was approved, which restricted cannabis and limited its production and distribution to research or pharmaceutical purposes. These prohibitionist measures were intended to curb the use of a substance increasingly consumed at the recreational level for its psychoactive properties. But cannabis consumers only grew in number, and in the second half of the century it ceased to be associated with criminal or marginal behaviour and came instead to symbolise the rebelliousness and spirit of the hippie movement in the 60s and 70s. In the 80s, with the arrival on the scene of heroin, the consumption of cannabis levelled off, rising again in the 90s, characterised by younger first-time users.

Among other factors, the increase in cannabis consumption can be traced to a changing social model. In the early 20th century a consumerist and globalised model was established that transformed the paradigm of drug use. It went from traditional consumption, where cannabis use was linked to a strong ritualization, to consumptive and decontextualized use in which the plant became just one more product on the market. A change occurred in consumption patterns and rituals, the context, and traditional customs virtually disappeared. Cannabis became one more commodity in a modern society that fomented compulsive consumption.

In addition to the phenomenon of globalisation, it must be added that in many societies there existed a culture of cannabis use... What is a culture of substance use?

Historically, every culture has amassed collective knowledge about the use of available substances with psychoactive effects, something developed through the experience of many generations. In the Mediterranean, for example, there is a culture of the use of wine, while some Muslim countries are traditionally farmers and consumers of cannabis. In this way the handling and customs of drug use arise, entailing a series of measures with regards to consumption and the contextualisation of the substance in question. Knowing the properties, effects and consequences for our bodies of cannabis use, for example, leads us to create certain guidelines that serve to minimise the risks posed by its use.

This does not mean that following these guidelines removes all health risks for users, as there will always be a small percentage of the population that engages in improper use and abuse, leading to addiction and other problems.

What happens when a new psychoactive substance is introduced into a society?

What happens is that to create a culture based on the proper use of the substance and an awareness of its health risks, there must be a long process of assimilation and integration of the foreign substance. It is no wonder then, that in a context in which cannabis has gone global (reaching corners of the globe without any tradition of recreational use), and in a framework of illegality, the substance has been used in an uncontrolled and excessive way. The lack of a cannabis culture, along with the disinformation and ignorance spawned by the black market, have created the perfect breeding ground for abuse and addiction.

As mentioned above, the globalisation of cannabis has led to a decrease in its ritualised use, the contextualisation of the substance, and the loss of its traditional meaning and function of its consumption. In modern societies priority is given to the psychoactive ingredients of the plant, and there has been transformation towards a pattern of consumptive, individual and hedonistic use.

Perhaps we should ask ourselves, therefore, regarding the need to establish a culture of cannabis use, as we may have been engaging in improper and uncontrolled use of this substance, under false precepts like "cannabis is harmless". While it is true that the therapeutic properties of cannabis have been widely demonstrated, this does not mean that its consumption poses no risks to health. The legal framework of cannabis at the international level is changing, and we must take advantage of this regulatory wave, which more and more countries and states are catching, to debunk the myths that have grown up around the plant. Only with accurate and verified information can we be aware of the risks entailed by the abuse of cannabis. It is time to remove cannabis from the shadows, in every way.

We clearly need to question how we are using cannabis. What do we look for in this substance? What is its function? What do we seek when we decide to use it, and what do we expect it to do for us?

We do not often ask ourselves these questions, but in reality they are essential to understand our consumption, and to analyse whether we are using the plant in an appropriate and responsible way. In the next chapter of Dinafem's risk reduction guide we will analyse the different types of functions to which cannabis may be put in order to become aware of what spurs us to consume it. 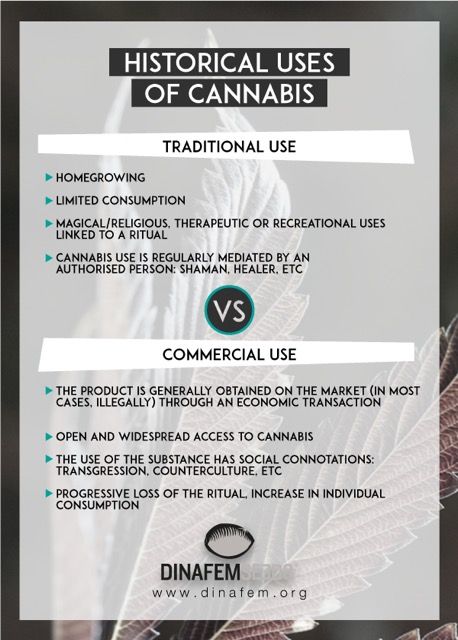