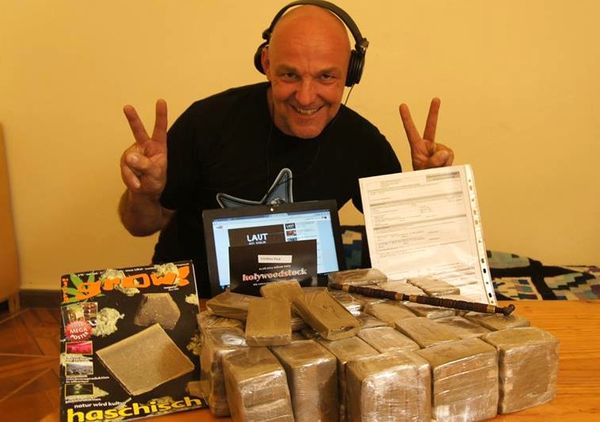 Two years ago, Lorenz Böllinger, professor of Criminal Law at the University of Bremen, founded 'Schildow Circle', a forum of over 120 German professors with the goal of requesting a restructuring of anti-drug laws. Through this review, they propose legalising cannabis cultivation, possession and sale, considering that the problem was the "restrictive" legal policy, and not marijuana.

"No to criminal records"

Lutz Meyer-Gossner, former president of the Federal Court, and Albin Eser, former director Max Planck Institute of International Criminal Law, were among the scholars who signed a petition to reform the narcotics law. Later, 2013, the group asked the lower house of the German parliament to form a committee with the participation of all parties, which would analyse whether existing anti-drug policies were effective or not.

These days, the professor has received the support of the group Alliance 90/The Greens and the Left Party to promote the initiative. In order to move forward, they need 120 votes, and members from both parties already reach 127.

Böllinger believes that legalisation of soft drugs is necessary for their users to stop being criminalised. He firmly believes that if you impose a sentence on a young person using cannabis, it will leave them with a criminal record that will make opting for good training and career alternatives impossible.

On the other hand, this group argues that legalisation will allow for control in product quality and avoid health risks in a country where there are an estimated six million cannabis users.

But this is not the only initiative promoted by civil society to contribute to the cannabis struggle. Last summer, hundreds of marijuana plants filled the city of Gottingen (in central Germany) and a group of activists in favour of decriminalising marijuana spread marijuana seeds in gardens, planters and green places in the area. Responsibility for the act was claimed by 'Einige Autonome Blumenkinder', a group that claimed to have spread several kilos of spores previously. The authorities were unaware of the situation until months later, and ordered the removal of all the plants.

The groups alleged that it was a protest against the "restrictive drug law", believing it necessary to be able to buy cannabis legally, just like alcohol. The Green Youth of Gottingen supported the action, and claimed to have carried out a similar one – only smaller – just a few months earlier. Also, as a show of support, they held a photography contest, encouraging participants to photograph "the great beauty" of marijuana plants.

That same year, in the red light district of Hamburg, the 'MediSeeds' shop of medicinal seeds, challenged the law by putting up a vending machine for marijuana seeds. The owner explained on national television that it was a machine for helping the 70 people in Germany that need to buy cannabis to relieve the symptoms of diseases they suffer from. However, the authorities soon put an end to the initiative.

'Coffee shop' to try for change

Some politicians have decided to support the public initiatives, aware that recently, the number of marijuana dealers has increased in Germany, especially those without a residency permit. They are forced to survive by selling marijuana, which at times, can lead to violence.

That's why in late 2013, Monika Hermann, mayor of Kreuzberg, proposed opening a legal 'coffee shop', which could control the situation of violence and harassment. The initiative – applauded by the public – attempted to take firm steps to end illegal business and crime associated with cannabis consumption, especially in Görlitzer Park, Berlin, a place that has become the largest drug sales market in the country. However, the Senate rejected the idea.

That's why this year, German Oliver Becker has launched a video from Morocco, explaining his intentions to sell hashish imported from Morocco in the park. He says he will do it with his van – mobile 'coffee shop' –early this summer.

He explains that his intention is to sell only some varieties of hashish and marijuana, grown with natural light, which he will import in great quantities from Morocco with all the commercial and legal certificates he can get. In no event will he sell more than five grams per person, and customers must show proof that they are over 21. That's right, he has decided that if they keep him from doing his duties, he will commence a hunger strike. His project even has a name: 'Holywoodstock'.

A million euros for the cannabis struggle

As if this was not enough, the German cannabis struggle takes on more weight after the known activist and president of the German Hemp Association, Georg Wurth, won a million euros on a game show.

Obviously, the money raised, as confirmed by the activist, will go towards the struggle for cannabis legalisation. Specifically, to campaign for German policy to consider the need to discuss the issues of decriminalisation and regulation. "Marijuana prohibition has failed. It is destructive and costly. We would like the replace the current black market with a regulated market that involves youth and protects the consumer", he declared.

Currently, public initiatives in Germany are ongoing. The group of university professors who demand decriminalisation continues to work, not only nationally, but internationally as well. And, of course, the very 'Hanf Verband', German Hemp Association, is collecting signatures to launch a parliamentary petition with the same objective: to establish amendments to the narcotics law and decriminalise offences for marijuana.