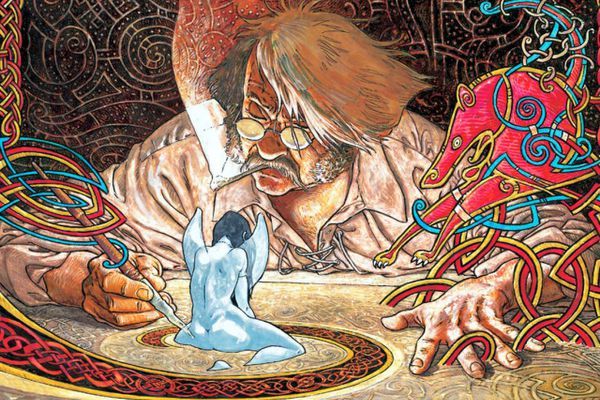 The magical, dreamlike world of Shakespeare

In the fantastic and dreamlike universe of many of William Shakespeare's works dreams and reality meld in a magic atmosphere, where it is easy to recognize the powerfully psychedelic and introspective world produced by a few puffs of some good weed.

Enjoying works of his like A Midsummer Night's Dream or The Tempest, one cannot help but notice stylistic touches evidencing marijuana in the English writer's creative tapestry. And so it was. Or that's the conclusion, at least, of a group of Australian scientists who found traces of marijuana in the author's backyard. After years of research they came to the conclusion that Shakespeare sat down to write with his pipes well packed with his beloved "notable herb," as he affectionately called it in some of his sonnets.

The "living" universe of Carl Sagan

Nobody can forget the episodes of the legendary popular science series Cosmos in which the astronomer and astrophysicist Carl Sagantook us on a journey to the edge of the universe on board a futuristic spaceship. The man who launched the Search for Extra-terrestrial Intelligence (SETI)organization created a visual odyssey exposing many of us for the first time to things like supernovas, star clusters, or the eternal dance of galaxies exploding and giving life to new cosmic creations. Posthumously it was made public that Sagan had frequently used cannabis on a recreational basis, but also as a means of inspiration for his daily work and to design his audio-visual journeys into the depths of space. 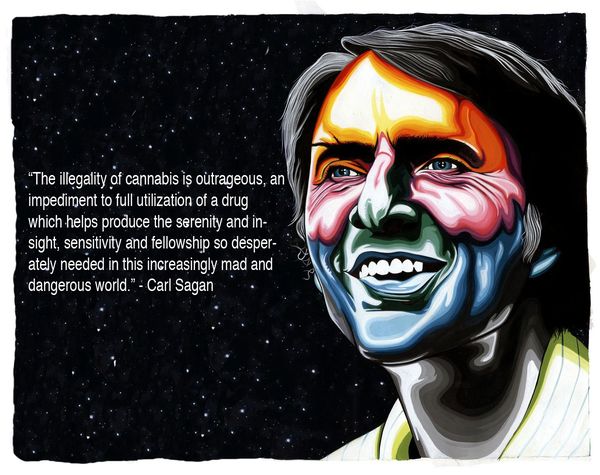 The famous scientist and popular science figure even worked as a pro-legalization activist behind the scenes. He penned, under a pseudonym, several pages in the book Marijuana Reconsidered, by his friend Dr. Lester Grinspoon, Professor Emeritus of Psychiatry at the Harvard Medical School, a work which extolled the possibilities offered by weed to enjoy life more. Although, in his view, the plant's most interesting properties were the astonishing "scientific, creative and social ideas one develops when he uses it."

The creative fecundity of the members of the Hashish Club

This group, made up of some of the most prominent Paris intellectuals and artists of 19th century, saw in the use of Indian charas a way to expand consciousness and experience new points of view that would enrich their creations. The figures belonging to this exclusive cannabis association created some of world literature's landmark works, such as the quintessential novel about revenge, The Count of Montecristo, written by Alexander Dumas; or the tragic tale of poverty in pre-revolutionary Paris, Les Miserables, by Victor Hugo, another regular attendee at meetings.

Not to mention other disciplines, like painting, which in this club of pot smokers was represented by none other than the painter of Liberty Leading the People, Delacroix; or poetry, always present because the founder of the association was the poet Théophile Gautier, the father of Symbolism and Modernism. Or the presence of the rebellious creator of Artificial Paradises, Charles Baudealaire.

Scene from the most recent cinematographic adaptation of The Count of Montecristo, by Alexander Dumas, a book containing great cannabis-related quotes, like this one: "The best and purest hashish in the world is made in Alexandria: the hashish of Abougor, the great, the celebrated maker, the only man, the man to whom a palace should be inscribed with these words: 'A grateful world to the dealer in happiness.'"

The surrealism of Breton as a wrecking ball of everyday reality

The father of surrealism, André Breton, was a regular consumer of hashish, who reported that it helped him to "deconstruct reality when I am awake and expand my dream world when I'm asleep." In his Surrealist Manifesto Breton presented this new artistic technique from the 20th century, comparing it to the resin of marijuana - which, after all, was closely linked to the pictorial rituals of many members of the group – "Surrealism is presented as a new vice-president that does not seem to be necessarily restricted to the happiness of just a few, like hashish, it is able to satisfy all types of tastes." 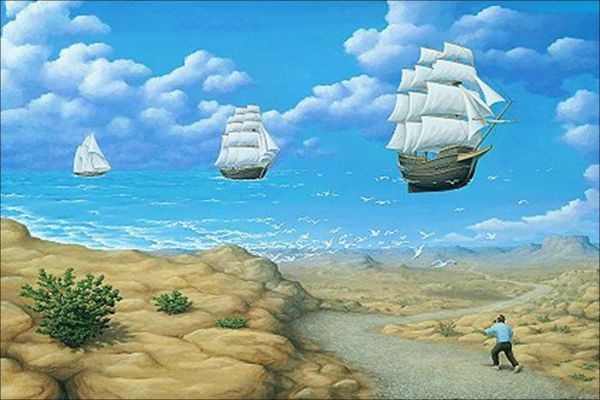 Painting of André Breton box illustrating the powerful symbolic and avant-garde language of Surrealism and its break with traditional styles of painting.

Bob Marley was the brightest star in the reggae universe, its ambassador in the West, and, at the same time, one of the major early champions of marijuana use during the 1970s, always defending the plant's role as a tool to live in harmony with oneself and others. His lyrics, explicitly inspired by cannabis, became a cry out against war, oppression and racism, in a world that lived under the pall of the Cold War and the ongoing risk of nuclear war.

Bob Marley and the colours of the Rastafari Movement, to which the famous Jamaican musician was belonged.

Marley always lamented the spiral of violence into which the world was falling, and weed's potential to create generations of more reflective and peaceful people whose values were not primarily material, but spiritual. His artistic world, rich in vibrant melodies, lyrics of protest and good smoke, was one of the most vivid illustrations of the fact that grass and artistic disciplines go hand in hand.

Allen Ginsberg, the Beat Generation and the dawn of the counterculture

The poet Allen Ginsberg was one of the leading lights of the Beat Generation and one of its most politically active members. Marijuana was one of his creative engines, just as it was for other artists of his period, which used it both for "its potential to awaken consciousness and wisdom" and wisdom, as well as its "quality as a tool" to unravel the aesthetic and structural patterns of certain works of art. 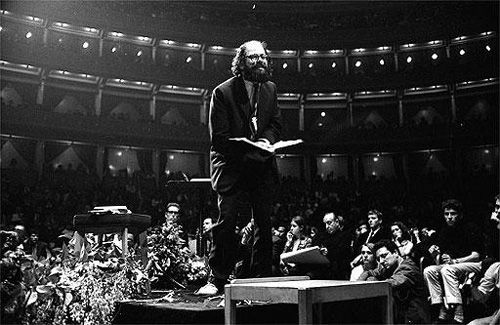 Ginsberg reading the poem "Howl" in a crowded venue.

At the height of his fame in the 1950s, until the end of his life, the author of the celebrated poem "Howl" maintained his staunch stance in favour of the decriminalization of marijuana. He recognized that he smoked every day, and credited grass for "having made him wake up and hate this pathetic world where, comfortably, militarism, economic materialism and sexual repression are supported."

In the United States of the 1940s Jazz and marijuana were inseparable. Louis Armstrong himself smoked it over the course of the 40 years he played the trumpet, as did other Jazz musicians like Miles Davis and Charlie Parker. They smoked grass to relax or be inspired for the feverish jazz improvisation sessions that sometimes lasted all night, or several in a row. The legendary saxophonist preferred the consumption of cannabis to liquor or other hard drugs, also widespread drugs in Jazz circles, a genuine pandemic amongst the community of artists. 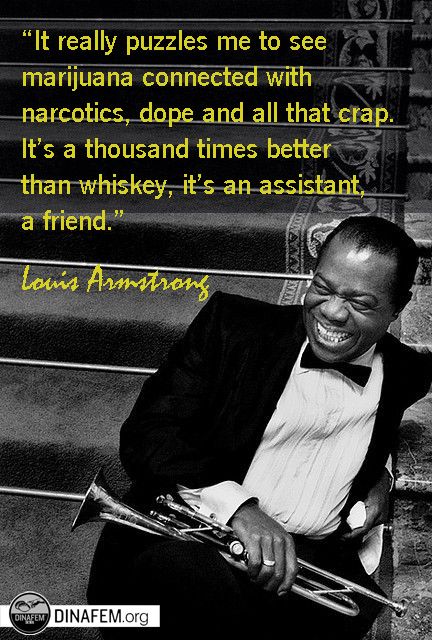