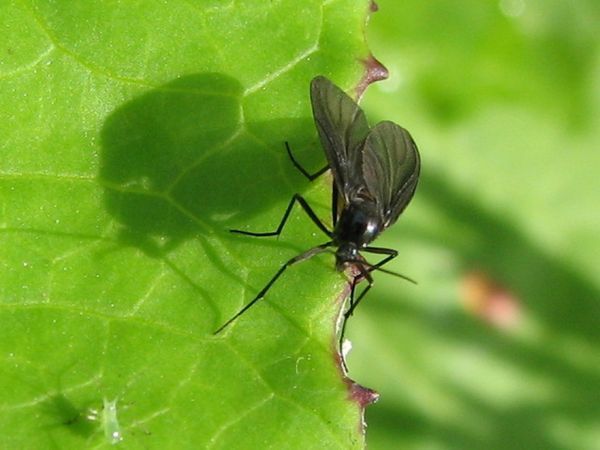 What is the substrate fly?

The black fly or Sciridae (sciarid) is also known by other names: soil fly, black fly, and fungus or mulch fly. In its larval stage the substrate fly usually does not exceed 4-5 mm in length, with a translucent body and a black head. In its adult stage these flies are grey-black, 2-4 mm long, and have thin and elongated legs.

After the male and female mate, the latter lays some 200 eggs in the substrate, which, after about three days or so, hatch the larva. In this first phase, the fly larvae live and feed on the soil, where they spend their first three weeks of life, after which they form the cocoon in which their metamorphosis occurs. Once converted into adults (winged flies) they emerge at the surface and remain at the bottom of the plant, feeding on decaying fungi and plant matter.

How to tell whether your cannabis plants have substrate flies

As mentioned above, this insect thrives in moist environments and tends to be found at the base of the plants, especially if this area is usually wet, so that's where you should look.

Damage: This tiny enemy infests the substrate of the plant in its first larval stage, feeding on small capillary roots and damaging the main ones. As a result, the plant grows weaker and its metabolic functions slow. The damage they do to the roots leads to the emergence of fungi such as Fusarium and Pythium, especially if the substrate is usually very wet. Substrate flies do not usually cause serious problems for large plants, but they can be dangerous for seedlings.

Although it is not among the most lethal and dangerous pests, you should not underestimate this insect, as if you do not catch it in time, and the plague spreads, it can become a problem. These are the symptoms that may tell you that your plants have become infected with the substrate fly:

If you did not initially notice the presence of this insect, and it has already become a serious pest, you will realise that:

How to prevent the substrate fly

If you want to get started cultivating cannabis, a golden rule to keep in mind is that an ounce of prevention is worth a pound of cure. It is always preferable to take measures to prevent the occurrence of pests that can attack your cannabis plants than combat them once they have already shown up. Here is a series of steps you can take in your crop to prevent the appearance of the substrate fly:

How to fight fungi gnats

If this pest has already appeared on your cannabis crop, we recommend fighting it with: