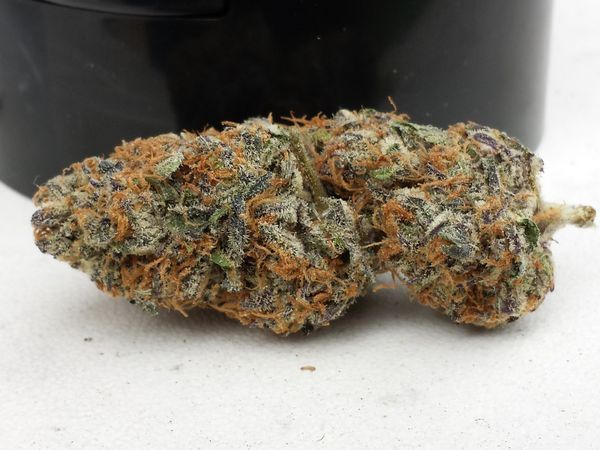 Characteristics of the Purple Afghan Kush

When looking at Purple Afghan Kush photos though, one can easily understand their enthusiasm – this royal indica variety captivates eyes and hearts alike with its beautiful purple and lavender colours emerging during flowering (not only if it's cold, also at regular indoor temperatures). The most remarkable characteristic of this full-blooded indica plant, however, is its highly exceptional smell. Kush strains normally have a spicy fragrance with earthy, piney and oily/gasoline notes, whereas Purple Afghan Kush gives off a totally different, exotically fruity sweet odour, amazingly smelling like freshly cut pineapple. That's why Dinafem also refers to this beauty as "piña colada"… Considering the fact that Purple Afghan Kush is a strain possessing the ability to produce purple colours makes this aroma even more special and admirable, as such strains typically have a harsh pungent flavour lacking fruitiness and sweetness. But sniffing at Purple Afghan Kush buds makes one think of a lovely Tahiti South Sea dream instead of travelling through the rough mountainous regions of the Hindu Kush.

Its purple colors are very striking and its aroma is sweet, totally different, exotic and fruity, with an incredible aroma of freshly cut pineapple, as if you were taking a "piña colada".

In terms of morphology then again, Purple Afghan Kush totally corresponds to a standard indica growth pattern, with its stout compact structure and thick short branches. This appearance of a small bush makes it a good discrete choice for urban balcony cultivation for example. It also grows fairly slow compared to other plants so that Dinafem recommends to keep it in the veggie stage a bit longer than usual. They also point out that Purple Afghan Kush plants require a somewhat lower humidity level for optimum performance - the irrigation amount should be reduced by approx. 10%, while the plants shall be watered just as regular and frequent as others, only with a slightly smaller quantity. This has to do with their Afghan heritage which is also responsible for their ability to resist hot temperatures and periods of drought: growers in California reported to Dinafem that Purple Afghan Kush ranked amongst the strains that were able to excellently cope with the extreme heat and shortage of water during the last summer.

Which makes this variety a highly suitable choice for outdoor growing in very warm and dry areas, but it will also give a perfect performance for example in a greenhouse in northern climate zones, versatile and sturdy as it is. Under natural light, maturity sets in by the end of September till beginning of October. Indoors, Purple Afghan Kush needs 60 days to ripen, producing very resinous dense flower formations with a potential yield of 500g/m2. Just as expected from a indica kush strain rich in THC, this exotic strain has a deeply relaxing and soothing effect on both body and mind. Which is long lasting but not devastating, it doesn't send the smoker on the couch sprawling. Also medical marijuana patients will enjoy the powers of Purple Afghan Kush, it is known and praised by many as a great therapeutic relieving painful muscle tensions for instance.

The Doc and the PAK

At the Expogrow Cup 2015, Purple Afghan Kush was awarded as the best indica variety, and it has also taken second and third place at two other Spanish cups. The Doc, an ardent lover of indicas, was straining at the leash to grow this extraordinary variety and put two feminised seeds to germination. They sprouted with ease and in the first weeks grew precisely as compact and stout as described by Dinafem. Said The Doc after four weeks of growth "these beauties look like those squat little cannabis indica bushes that I've seen in photos from Afghanistan from the 1970s, thus perfectly authentic!" He would have followed the advice of Dinafem and given the two plants a longer vegetative stage than four weeks, but the presence of other, faster growing strains in his grow room didn't allow for this. So the two PAKs entered into the flowering stage with heights of only 37 and 44 cm.

However, to The Doc's delight they exhibited more elongation in the course of flowering than expected. And blooming rapidly got into full gear, after three weeks the two plants were littered with thick flower knobs which thanks to early resin production were already glistening attractively. Reported The Doc after the fifth week of flowering "they've meanwhile put on a lot of weight, with the buds having that typical shape of fat bulbous indica chunks. Which are heavily coated with resin glands, yippieh! The calyx-to-leaf ratio is higher than I had expected. Here and there, indeed, the calyxes and leaves are exhibiting those lovely purple and lavender colour tones, particularly in or near the tops, very graceful to look at. And there it really is, that exotic ooey-gooey pineapple smell, absolutely stunning. It feels though as if this fragrance was slightly infused with a little spray of 4711, too. Totally unique and delicious, this is an aroma combination I've never smelled before in my life".

The Doc was surprised that his two Purple Afghan Kush plants had fully matured already after 55 days of flowering, requiring five days less than officially stated. In the last two weeks, resin seemed to have come out in buckets over the calyxes and leaves, richly covering them with dense sticky trichome layers, shaping a majestic silvery white look which most beautifully contrasted with those purple and lavender blue hues. Praised The Doc "these are really highly aesthetic and appetizing plants, with that exotic pineapple perfume odour adding to its super intense sensuality – undoubtfully a variety to fall in love with!"

The two plants had arrived at heights of 61 and 72 cm in the end, laden with fantastic indica-style buds. After the buds had been dried, The Doc got another big surprise: Those lavender blue hues in the leaves had come out even more distinct now, being so evident that they gave the buds an overall blueish appearance which made The Doc joke "also in its dry form, the colouring of Purple Afghan Kush stands out from the crowd… I guess that all folks around town will soon be crazy about that 'sensational blue stuff' – just like in "Breaking Bad", hahaha!" He was also very happy about the fact that this "pineapple 4711" aroma not only had survived the drying process without getting damaged, but even gained intensity. "Jeeez, I could get addicted to this unique exotic fragrance and sniff at these buds all day long!" he enthused.

Smoking Purple Afghan Kush is like resting in a hammock stretched between two palm trees of the South Sea.

With yields of 57 and 64 grams, Purple Afghan Kush fell below The Doc's standard, but with consideration to their small size, it was a very respectable achievement nevertheless, The Doc felt, assuming that "with six instead of four weeks in the veggie stage, the plants would have delivered quite a bumper harvest. But it doesn't matter, because I think that this aficionado strain stands for fabulous quality and not necessarily for fabulous yields. And after he had tried Purple Afghan Kush for the first time, he could fully confirm his statement… as that sweet pineapple flavour caressed his palate so deliciously and intensely that The Doc instantly longed to be beamed to a white South Sea beach, holding a piña colada cocktail in his left and a Purple Afghan Kush joint in his right hand… and then it felt quite like that mentally as he seemed to levitate right to such a place with his Volcano hot-air balloon: "This strain provided a most pleasant, very warm indica stone to me, I felt totally happy and super relaxed, like resting in a hammock stretched between two South Sea palm trees. What a lovely exotic day dream of the South Sea that was! This cannasseur weed is perfect for a recreative time-out, for occasionally going on mental holidays, drifting to spectacular remote beaches." His mental chillout under palm trees lasted more than two hours.

Concluded The Doc "simply astounding and unique, this fruity exotic treasure. With its highly special qualities it will easily turn the head of any indica lover. No wonder that Purple Afghan Kush is one of Dinafem's own favourites!"