There are a couple of strains out there in the world of cannabis that are a must have for every bigger seed company, ultimately demanded by their customers by reason of a unique buzz or flavour or the fact that it has gained big popularity all over the world as a highly productive commercial plant. Without a doubt, the neo-classic strain Cheese ranks among these must-haves. It has a history stemming back to the late 1980s: In the years of 1988/89, a grower from Southeast England selected a very special genotype from a bag of Skunk #1 seeds that had apparently underwent a spontaneous mutation.

This unique plant produced buds of impressive size and had a pronounced sweet cheesy aroma. In addition, it was easy to clone. So that grower preserved it in the form of a female clone and called it "Cheese". In 1995, the Exodus group, a circle of English home growers, got their hands on such a Cheese clone and made it spread over the whole island like wildfire, soon being traded under the name Exodus Cheese aka Original UK Cheese. But it wasn't before the nineties that Cheese set out to triumphantly conquer the whole world, cherished by both small-scale and commercial growers for its enormous productivity combined with excellent quality.

It also established itself as a standard that made it onto almost every Dutch Coffeeshop menu card. As a matter of course, also the breeders of Spanish market leader Dinafem – specialists in tracking down precious original genetics – managed to get themselves a genuine Exodus Cheese cutting and developed it into an actual seed strain by crossing it onto itself. Given that genetic background, it doesn't come as a surprise that Dinafem's Cheese strain fully lives up to its caseous name, with the strain description speaking of an intense "old-school" indica fragrance with shades of hashish, smoked wood, dry fruits and several spices which on the palate translates into a powerful spicy flavour that leaves a savoury enduring aftertaste reminding of a good cured cheese. 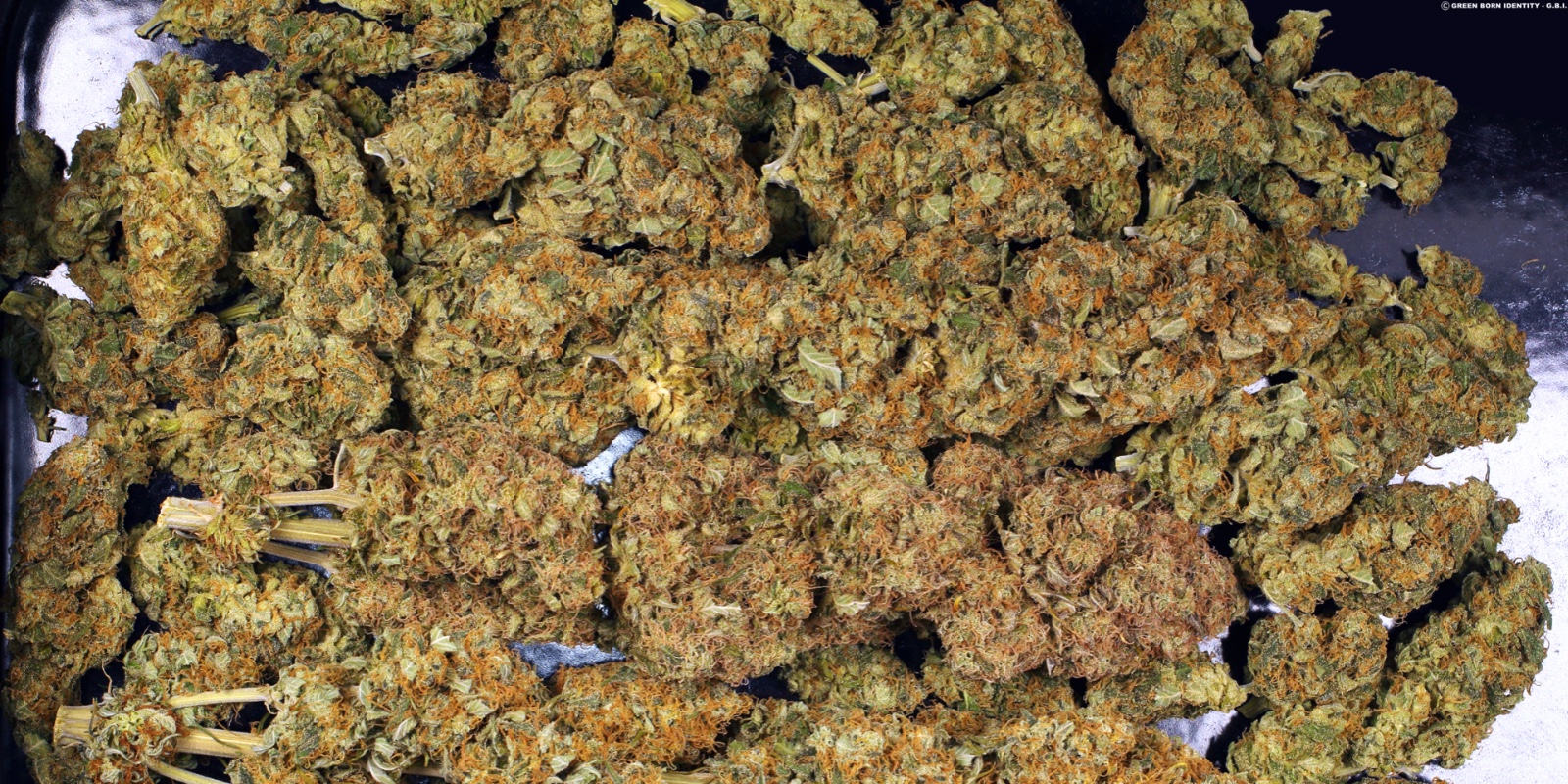 Due to its very penetrative smell (don't forget that Cheese is nothing else than a special form of Skunk #1, and this strain earned its name for a good "stinky" reason…) it is strongly recommended to make sure that those carbon filters are working well. Apart from that, Cheese is a very pleasing, uncomplicated grow room companion to both beginners and experienced cultivators, yielding medium-sized (sometimes taller) vigorous plants.

Their numerous branches are clothed with wide leaves and after 50-60 days of flowering laden with big compact buds richly covered in resin, yields may amount up to generous 525 grams per sqm. But not only indoors does it well, it also thrives outdoors, eagerly soaking up every single ray of sunlight. Thanks to its hardy nature, it has the ability to flourish even in a humid cloudy climate as it is typical for example of England. Cheese plants can grow to heights of up to 2.5 metres outside, finishing in early to mid-October, with the potential to crack the 1,000 grams per plant mark. Its medium-high content of both THC (9-14%) and CBD (not specified) makes Cheese a comfortable well-being provider the effect of which covers both sides of the cannabis plant, sativa and indica: It starts off with a soaring cerebral, slightly euphoric head high that later on passes into a very relaxed body sensation and feeling of calmness, balance and serenity.

Dinafem's `Cheese strain scooped its first official award when taking 2nd place in the grow category of the Copa CABA 2017 in Argentina. Nice enough, but that wasn't the only reason of course why master grower Mr. Knolle was keen on this strain: A while ago, he had already grown Dinafem's Critical Cheese (Critical + x Cheese) and been totally enthused about the results which got him interested in Cheese in its pure form as well.

And now the time had come, Mr. Knolle secured himself a package of feminised Cheese seeds and germinated three of them. Delivering a perfect quick germination performance, after less than three days the seedlings shoved their heads over the surface of the Jiffy Pots and eagerly grew upwards to the LED light. Mr. Knolle kept them in the veggie stage on a 18/6 light schedule for 2.5 weeks, and during this time they evolved into very compact multi-branch bushes of most amazing uniformity which made Mr. Knolle rejoice: "Wow, simply unbelievable! I haven't seen something like this before - these three plants are identical down to the last detail. If I didn't know better, I just couldn't believe that they've emerged from seeds".

Flower formation was very similar to identical, characterised by a high share of calyxes and immense density

In fact, it was a miracle of nature that all the three plants not only had the same dark green medium broad leaves and tight internodal stacking, but also precisely measured 31 cm in height at that point! Already one week after Mr. Knolle had shifted the daily light cycle to 12/12, the three Cheeses switched to flowering, exhibiting female preflowering. Soon the green cheese factory started to work with full speed ahead, devoting itself to massive flower production. During the next weeks, enormously bulky flower heads formed up on all the three plants, with the thickest one arising from the centre of course, but even the side branches boasted donkey dick buds each of which would have cut a fine figure as a top cola on the main stem.

Flower formation was very similar to identical, characterised by a high share of calyxes and immense density. "Undoubtedly, this is a case of extra-chunky hard cheese," Mr. Knolle chuckled. As they wilted, those countless pistils turned from white to a luminous orange-red colour which looked very pretty in combination with the tons of twinkling resin glands that meanwhile copiously covered the calyxes and flower leaves. This gorgeous flowering scenario was further sweetened by the fact that all the three Cheeses gave off the same captivating odour. Which was as penetrative as described by Dinafem, wonderfully sweet 'n spicy with a slightly fruity note. "A super delicious smell that doesn't remind me of Cheese yet, but that's not the way it is intended to be at the current stage I think - just like with real cheese, the aroma will mature and gain depth through fermentation later on," said Mr. Knolle, who added with a green: "In my own private cheese curing room!" Right up until the end, the three Cheese plants had kept their extremely high level of homogeneity, exhibiting the very same growth and bloom pattern, with two of them having arrived at an identical height of 76 cm, and the third one being merely 2 cm taller. 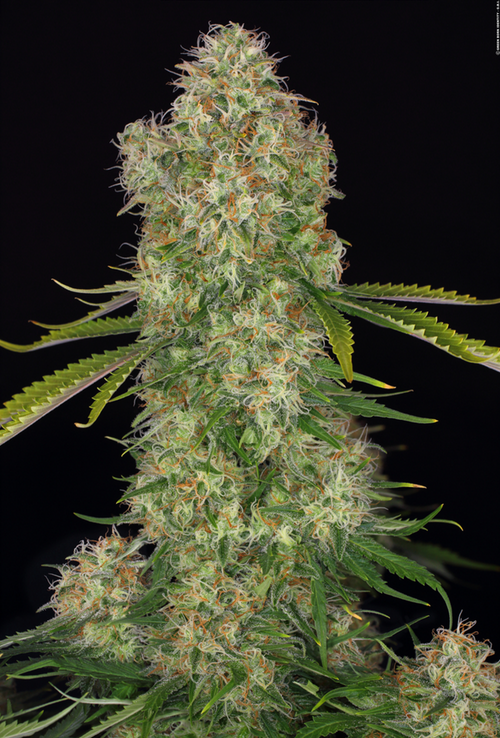 Also, in terms of maturity, there was a great deal of conformity, after 57 days of flowering, all the three plants were fully ripe. With only few leaves to be cut off the buds, Mr. Knolle waltzed through the harvest work with ease and some weeks later ended up with dry Cheese nuggets that were some real eye candy, thanks to their gaudy orange hairs and profuse trichome frosting. The tremendous yields of 90, 93 and 102 grams came close to or slightly exceeded the standard amount of 100 grams sold at the cheese counter in the local supermarket. Mr. Knolle's expectation of a caseous flavour developing whilst bud fermentation came true, because there it was after the drying and curing process: a truly cheesy fragrance that, indeed, lived up to a strain called "Cheese".

And it bore a striking resemblance to the smell of the first Skunk Mr. Knolle had ever encountered, which happened in the early 90's in Amsterdam. Fittingly, he called it "Cheese Skunk" back then as it instantly made he think of a piece of condimental sweetish cheese. Which was the case here once again, and there also was a nutty undertone to Mr. Knolle's Cheese buds, accompanied by a slight note of smoked wood. The cheesy buds of one of the plants revealed a fruity secondary nuance instead though. When he put some buds on a baking tray for me to take pictures, Mr. Knolle said with a chuckle: "Here you are, the cheese platter is served…!" The long-awaited Cheese tasting session was conducted with a "Crafty" vaporiser made by Storz & Bickel. Half a gram of Cheese was vaporised in the filling chamber, and after Mr. Knolle had pleasurably sucked down the Cheese vapor into his lungs, he enthused: "Ha, that's my idea of molecular gastronomy! A very special aromatic treat, to inhale vaporous savoury cheese. The flavour really appears cheesy to me and seems to accumulate on the palate. Also, that nutty note I had previously smelled comes through in the aftertaste, reminding me of fenugreek goat cheese. I love fenugreek goat cheese!"

The Cheese buds with a hint of fruit accordingly delivered a slightly fruity cheesy aftertaste. Mr. Knolle experienced the effect as being stronger than he had expected: "After two tokes I sensed that quite a lot was happening in my head. I started to get that beloved 'inner sunrise' feeling, a shot of euphoria dashed through my mind and gave me a strong mood boost with plenty of nice thoughts. They say the moon is made of green cheese, but now my mood was made of green cheese, literally. After about a quarter hour, things began to get physical also, namely in the form of a warm relaxing body hum that after a while made me feel like one big soft piece of cheese! At the same time that initial lucid head rush gradually gave way to a calm soothing mental buzz so that body and mind were in a state of harmony, deeply relaxed and well-balanced, which lasted for one and a half hour." 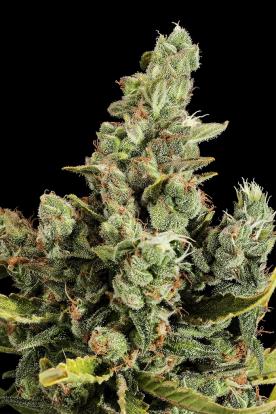