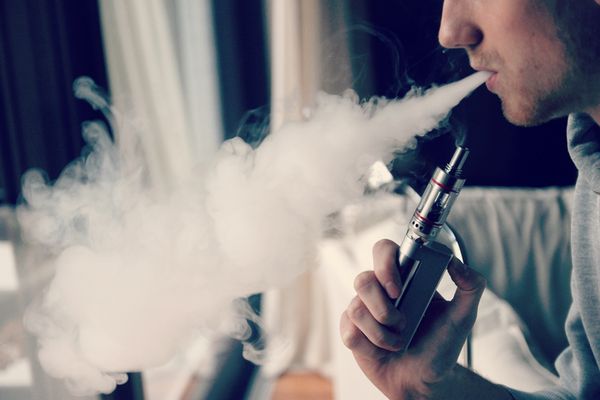 Yes, no more waiting in the queue at the tobacco shop to buy your packet, so beautifully adorned with pleasant messages and foreboding slogans like "Smoking causes a slow and painful death." Or the 80% tax on every pack, soon to sell for over seven euros. And no more unpleasant smell of nicotine, or yellow teeth and fingertips. Because the fact is that most users smoke their grass mixed with varying amounts of tobacco, the main aim being to facilitate inhalation, but this practice is eschewed by the most therapeutic users and some purists who believe that tobacco is a hard, addictive and particularly harmful drug.

For now, most of those vaping cannabis are therapeutic users. And thanks to the many awareness campaigns carried out, the idea that we should takes steps to protect our health is gaining steam. Many arguments wielded by opponents of cannabis are based on purely bad faith, but we must recognise what the evidence shows: its excessive use, as in the case of alcohol, can cause serious health damage. Any smoke resulting from combustion and that is inhaled is potentially damaging to the respiratory system, and cannabis smoke does have significant amounts of tar and carbon monoxide.

Moreover, its temperature is higher than tobacco's, which is often filtered. Finally, most pot smokers inhale longer, and sometimes more intensely, than tobacco smokers do. Vaporisation employs a technology that effectively shields the body from these drawbacks, difficult to ignore in the long term. The benefits that can be expected from vaping not only involve the respiratory system, but extend to all the vital functions and overall health.

The aroma emanating from cannabis-rich vapours is very different from that resulting from combustion. It is a smooth, sweet and very agreeable scent that can only be detected by people in the immediate vicinity. In addition, this smell does not stick, leaving no traces on clothing or hair, and completely disappearing in less than one minute. Thus, its advantages include discretion, a plus for all users.

It is true that investing in a vaporisation kit is a bit costly. The higher-end models, like the VOLCANO, cost around €450, as compared to some portable kits selling for about €100 that allow one to discreetly vape outside, unmolested. With the same amount of product, vaping delivers a much more powerful high than smoking, which destroys a portion of the plant's psychoactive substances. What's more, it does not irritate the lungs at all, such that the vapour can be inhaled and consumed more easily, in a more pleasant way, while it also optimises the effect from the amount consumed.

Dating back to medicinal practices, vaporisation allows one to dose out his consumption depending on the effect desired much more precisely than with smoking or ingestion. With most vaporisers the plant is heated only during inhalation, without any vapour loss between hits, and many kits offer the possibility of using different temperatures. A user reported that although it took him a week or two to learn to fully utilise all the tool's features, vaping had forever changed the way he smoked - or consumed, rather. He recommends reserving the plant's best buds for it, those growing at the top and having received the most light. With the remaining buds one can make oil by dissolving the psychoactive ingredients in alcohol.

"And what about the delicious taste of an Indica joint, rolled with just the right dose?" some traditionalists will ask. Just wait until you experience the taste of a long drag on your vaporiser. The flavour of smoke is essentially that of carbon monoxide, so true aficionados will discover, intact in the vapour's molecules, the true, authentic and unique aroma found in the plant's terpenes. Of course, one can enjoy the taste of smoke, very different from one strain to another, but the burning strongly alters the aroma, while vaping preserves it during its transmission to the consumer's senses.

7. ANOTHER WAY TO CONSUME

The technological content of vaporisation kits and their possible applications have made them an accessory widely used in hospitals, especially in Canada and the United States. Vaporisation also brings us closer to nature. It is a way to easily learn about aromatherapy and phytotherapy, "alternative medicines" that offer new forms of simple and inexpensive treatment. Many medicinal plants can be inhaled.

Of course, we must remain cautious and consult with specialists in the most critical cases. And when one has been in the habit of smoking for a long time, switching to vaping requires a certain cultural revolution.

In the kits that employ a conduction system the cannabis comes into direct contact with the device's hot surface, which does entail some disadvantages: possible burning or initial burning, and the added difficulty of controlling the temperature. This slight temperature modulation is actually a key factor to consider when purchasing a kit. In fact, the temperature at which the various cannabinoids present in the plant vaporise ranges from 157° to 220° Celsius. Low temperatures are known for their calming effects, while higher ones are known for their invigorating and physical ones. With more expensive convection systems the cannabis is isolated from the heating element through a filter and heated by a flow of hot air.