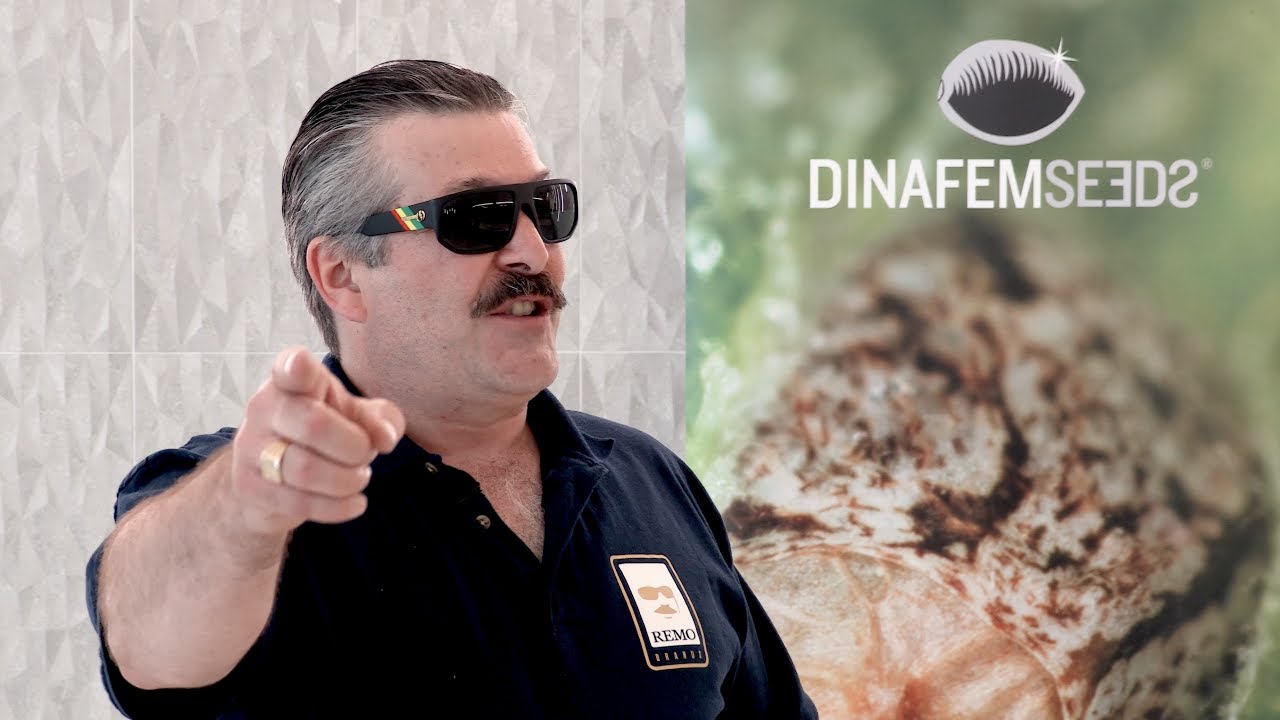 Cannabis personalities in the US

Kyle Kushman, pseudonym for Adam Orenstein, is a cannabis grower and breeder specialising in vegan and organic growing. With over twenty years' experience, his organic farming methods that avoid the use of animal-derived products are a reference point for cannabis growers around the world. His career highlights include over a dozen awards in the Cannabis Cup competition, countless contributions to the prestigious magazine High Times over the past two decades and lectures at the Oaksterdam University - the first in the world to offer a degree on cannabis - following legalisation in California.

Steve DeAngelo, founder of the world's most famous dispensary

Hablar de cannabis sin mencionar a There's no way to talk about cannabis without also mentioning Steve DeAngelo. Founder of Harborside Health Center, one the most famous dispensaries in the world, this prominent cannabis figure started his career as an activist. His book The Cannabis Manifesto is one of the most influential pleas for medical cannabis and his dispensary was featured in Weed Wars, an American documentary film released in 2011.

Co-founder and president of the investment group The Arc View Group, the legalisation of recreational cannabis in California on 1 January this year earned the DeAngelo brothers further media attention, with TV cameras crowding around the Oakland dispensary to capture the mass of people that was queuing from 6 am and the joy of the brothers when opening the doors to start the sale of cannabis to over 21s.

Jack Herer, one of the biggest names in the cannabis industry

An activist and an advocate of legalisation before the subject was even in the pipeline, Jack Herer made history in the field of cannabis. Born in New York in 1939, this former republican who served in the army discovered the joys of cannabis when he moved to California with his girlfriend, and from that point he never abandoned his crusade for cannabis legalisation. He wrote two books - G. R. A. S. S. and The Emperor Wears No Clothes - and was featured in a bio-documentary entitled Emperor of Hemp. The Dutch seed bank Sensi Seeds gave his name to one of their seeds and today the strain Jack Herer is one of the most renowned in the world.

A former member of the Office of Alcoholic Beverage Control, Lori Ajax is the newly appointed Chief of the Bureau of Cannabis Control. For the next two years, this 51-year-old woman will be charged with the challenge of developing a legal framework for the production, distribution and sale of recreational cannabis in a country that is among the world's ten largest economic powers. Although she rarely gives interviews or makes public statements, she is constantly under the spotlight since the line of action adopted by the fifteen-member team she leads could serve as model for countries joining the legalisation wave.

Founder of the Beverlly Hills Cannabis Club, one of most exclusive cannabis social clubs in the world, Cheryl Shuman has brought pot closer to the luxury industry with her ruby-encrusted vaporizers and her cannabis parties for Californian jet-setters, helping to break down the stigmas surrounding cannabis users.

Shuman was introduced to pot by her therapist, who rolled her a joint during a session and told her something like 'All you need is a couple of puffs', after which she become a regular user. Following a cancer diagnosis, she registered as a medical user in California and sowed the 99 plants she was entitled to, ultimately becoming the Marta Stewart of cannabis.

Known to most as 'real life Nancy Botwin' - she inspired Weeds' main character - and founder of one of the first medical cannabis dispensaries in Southern California, Dr Dina owes much of her fame to King of Weed Snoop Dogg. When the rapper was touring in LA, she got his friend a medical cannabis card and, convinced of the benefits of cannabis and of the need to supply it in accordance with the law, she has been serving celebrities in her West Hollywood dispensary ever since.

Her work as a distributor has earned her a prominent place also on TV. Besides inspiring Weeds, she is the cannabis consultant for the show Disjointed, whose dispensary is based on Dr Dina's, and this year she will be starring in Top Shelf, a production by the online TV channel 420TV that will take viewers on a trip to some of America's most famous dispensaries.

Paul Armentano, advocating for legalisation through the pen

A writer and researcher, Paul Armentano is the Deputy Director of the National Organisation for the Reform of Marijuana Laws, and association that promotes access to cannabis patients and overall users. He has contributed to over 1,000 publications on cannabis and co-authored the book Marijuana is Safer: So Why Are We Driving People to Drink?

Remo, the Canadian behind one of the industry's most fruitful YouTube channels

Known as The Urban Grower, Remo is one of the most beloved figures in the cannabis industry. If you are at a trade fair and run into a crowd of people blocking the way or asking for selfies with their phones, the chances are that the Canadian grower has come on the scene. Growers love him and he is constantly stopped by fans for questions and selfies - and also to make him try a bit of their crops. Founder and CEO of the fertiliser company Remo Nutrients, this YouTube star is appreciated not only for his high-quality products, but also for his accessibility, for his expertise in cannabis growing and for the casual way in which he spreads his passion for the plant.

As a chronic back pain sufferer, medical cannabis is the only remedy that gives him relief, which led him to become an ardent advocate of the plant. Whenever asked about how he joined the anti-prohibition movement, he smiles and says that he was driven by same the same reason as everyone else: because you get arrested for something you don't consider to be wrong and you don't want to end up in a cell again for that very reason. Last year, we at Dinafem had the pleasure of working with him and his team in the creation of a THC-rich strain that bears his name, and unsurprisingly considering Remo was involved, Remo Chemo has entered 2018 as a true champ.

Jodie and Marc Emery, the weed princes of Canada

Husband and wife, Jodie and Marc Emery run the Cannabis Culture group - Canada's most iconic symbol of activism - and are in charge of the most important magazine and TV channel in the Canadian cannabis industry. Activism became a way of life for them in 2009, when Marc Emery was arrested by the Canadian DEA and sentenced to five year's imprisonment for selling cannabis seeds to the US, making the headlines whenever they get arrested or make a public statement.

Even if the Canadian Government intends to legalise recreational cannabis this year, the couple continues to lead protests against the prosecution of cannabis users and non-licensed businesses. Last summer we had the chance to interview Jodie Emery after her arrest in March for 'drug trafficking and possession', a charge motivated by her role as head of the franchise network of dispensaries Cannabis Culture.

Jamie Show, an advocate of dispensaries and of the free access to medical cannabis

Jamie Shaw has been at the forefront of Canadian cannabis activism for over 20 years, when she became a medical cannabis user because of an anxiety disorder. She has held the posts of Head of the BC Compassion Club and of President of the Canadian Association of Medical Cannabis Dispensaries, among others, and has coordinated relations between the Government of Canada and MMJ. Currently, she is a member of the National Institute for Cannabis Health and Education (NICHE).

When you devote yourself entirely to something, the experience tends to prove life-changing. This is exactly what happened to Clint Younge, who was constantly bullied as a child because of his ADD and homosexuality. Twenty years ago this was a common practice, and in Younge's case it had repercussions in his adult life. Younge, who had entered his twenties suffering from PTSD, found cannabis to be a much more effective drug than his prescription medication, and has been advocating for easier access to medical cannabis ever since. Currently, he is the CEO of the network of dispensaries and clinics MMJ.

Head of the Spanish Observatory of Medical Cannabis (abbreviated to OECM in Spanish), this 37-year-old woman has undergone back surgery over ten times since she was eleven, when she suffered a bad fall while skating. Drugs proved ineffective and she had to learn to live with the pain until she discovered cannabis and cannabinoids, which significantly improved her quality of life. This encouraged her to found the OECM and the association Dos Emociones, as well as to provide counselling and assistance to patients in need of medical cannabis, the regulation of which she promotes.

Iker Val, the most visible face of cannabis activism in Spain

If you don't mention Iker Val, then you're not talking about Spanish cannabis activism. Former President of the Basque Federation of Associations of Cannabis Users (abbreviated to EUSFAC in Spanish), Coordinator at the Renovatio Foundation and member of the technical committee of Regulación Responsable, he is one of the most prominent figures of the cannabis movement in Spain. He's been in the industry for almost his entire life and ran the legendary cannabis social club Ganjazz until its closure in 2015.

Martín Barriuso, the most prominent cannabis activist in the Basque Country

Without Martín Barriuso, cannabis social clubs would only be a dream, at least in the Basque Country. Developer of the Cannabis Social Club model, this activist founded the Kalamudia Association - which coordinated the first collective plantations in the Basque Country - and is the president of Pannagh, an association that, together with Barriuso himself, attracted huge media attention following a case that reached the Spanish Supreme and Constitutional Courts.