Our outdoor growing experience started in May, in an open field sheltered by hills in the centre of Italy. We purchased three Blue Cheese feminised seeds by Dinafem, and we sowed them in Jiffy pellets. After germination, we transplanted each seedling to a ½ litre growing pot with a base of expanded clay and BioBizz Light substrate. As climate conditions in May are usually rather unpredictable, we decided to build a small portable greenhouse with a plank of wood and a wire mesh covered in see-through canvas that we fixed on both sides. This ensured that the plants were protected during their first few weeks of life, and we could easily move them from one place to another whenever necessary.

We were away for two weeks, so we filled up the plates under the pots with water to make sure the plants didn't go dry, and we sprayed the greenhouse base with an anti-slug solution, which proved to be providential as it was rather cold while we were away, and it didn't stop raining. After those two weeks of adverse weather, we transplanted the seedlings into three 50 litre Pandora's Pots, using the following substrate which had been prepared 12 days earlier:

Once the fifth pair of leaves had formed, we gradually enriched the irrigation water with two different types of liquid fertilisers: 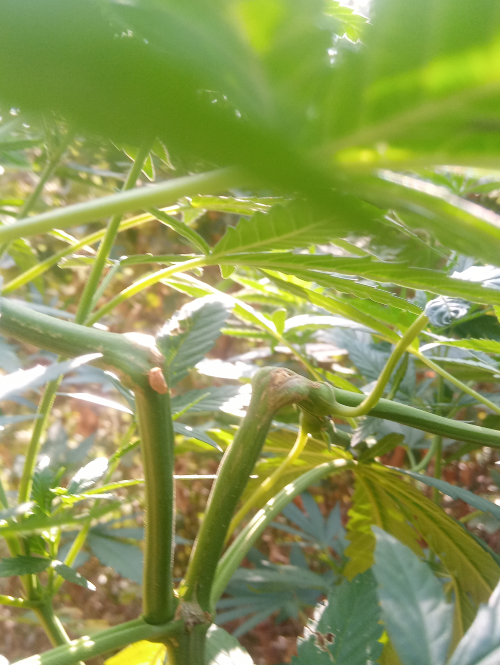 Over time, the plants continued growing and developing more internodes. When they reached a height of 30 cm we used the FIM trimming technique to promote lateral growth for discreet growing. Once they developed a bit further, we slightly increased the fertiliser dosage with Sensical, a supplement based on calcium, magnesium, manganese, iron, and zinc, which helps improve plant health.

Next we started alternating between irrigation using fertilisers and irrigation using only pH adjusted water. By July the plants had reached 1 metre in height. We used the super cropping technique very carefully, which consists of partially fracturing the branches, thereby making them stronger, so they can then withstand the buds' weight more easily. This also promotes productivity and controls vertical growth, which helps the plants blend in with the rest of the vegetation so they go unnoticed.

Judging by its development, this is a strain that grows quickly and vigorously, despite having a typically Indica internodal spacing. Just by rubbing its central cola you can sense Blue Cheese's unmistakable aromas: blueberries and cheese.

In August, we improvised an automatic irrigation system because we didn't spend a lot of time at the grow. We used two 1 ½ litre water bottles for each pot, placed upside down into the soil, with two pebbles inside so the water would be released gradually. 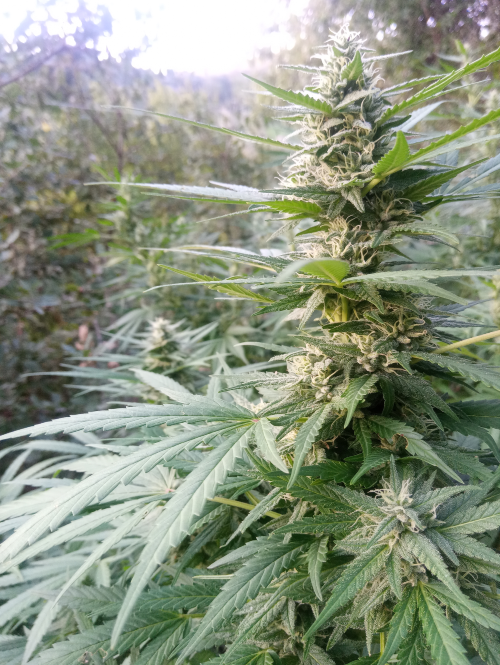 Around September, pistiles started to grow and the calyxes got fatter: a clear indication that flowering had arrived. We then substituted the veg phase fertilisers for others more suitable for this phase:

Throughout this month, the buds continued growing vigorously, forecasting an outstanding yield. There were some worrying times due to some strong rains, typical of the summer season, and some signs of botrytis that thankfully led to nothing after removing the leaves that showed some symptoms.

In October, we were met by bushy plants with a height of 1.5 metres that were loaded with aromatic resin. We flushed the soil and stopped all irrigation during the last week of cultivation to accelerate the drying process after harvesting, which we carried out on 15 October. Despite the reduced number of hours of light that the plants were exposed to (when we chose our location, we prioritised discretion over light exposure), the buds were compact and highly resinous, with deep notes of fruit, milk and honey on the nose, and pinewood hues with red berry touches on the palate.

But most surprising of all was their effect: although Blue Cheese is a pure Indica strain, the prevailing sensations are cerebral in the style of a Sativa. In this case, the effect was energetic and reflective rather than euphoric or hazy. Instead of decreasing concentration, it actually promoted it and stimulated both communication with other people and the performance of any activity, something that would be unimaginable with the muscle relaxation normally produced by the Indica varieties. In short, a surprising strain that showcases all the benefits of the Indicas (great yield, speed, and high resistance to mould and disease), but which is also perfect for those with a super active life loaded with work commitments and stress. A type of weed that any grower would be happy to enjoy all year round!