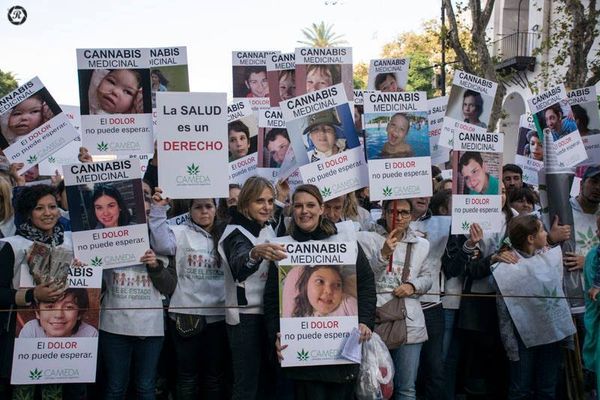 The legalisation of cannabis use is spreading in Latin America. First it was Uruguay and Mexico that approved rules for recreational consumption, followed by Colombia and Chile, with regulations in therapeutic sphere. Now it is Argentina's turn. This decriminalisation is another sign of the growing acceptance of the plant in the Americas and around the world.

This time the Argentine initiative was the result of the pressure brought to bear by the mothers and fathers of children with health problems alleviated by cannabis. Cases of childhood epilepsy resistant to conventional treatments (also known as refractory epilepsy) have multiplied in Argentina in recent years. Through organisations like Cameda (Cannabis Medicinal Argentina) and Mamá Cultiva, families have been fighting for more than one year to make cannabis oil legal, as it allays patients' pain and symptoms, and significantly improves their quality of life. Until now hundreds of families across the country had no other option but to extract oil from flowers without being detected, to spare their children from epileptic seizures.

The new law allows research into the plant and the importation and distribution of the oil extracted from cannabis, but without decriminalising personal cultivation. This step is insufficient for many, though for others it is a source of hope for greater legal permissiveness. The Executive has acted to reassure families, promising that there will be a "time window" for importation until the State, through the National Institute of Agricultural Technology (INTA), is capable of producing it.

The increase in the number of countries that have depenalised the use of cannabis has confirmed its proven benefits, demonstrated by numerous scientific studies.

Even so, the controversy surrounding this legislative advance continues to rage. Valeria Salegh is the president of the association Mamá Cultiva, and believes that cannabis oil is not a substance capable of being standardised, as the government plans to do. "We already discovered that the isolated molecules are worthless. We need the whole plant," says Salegh.

For families, the solution is cultivation for personal use. Paulina Bobadilla, a member of Mamá Cultiva Chile, an NGO that has already achieved its objectives in the neighbouring country, states that they are aware of many cases in which standardised oil does not work. "It is the same as with traditional medicines, you need to have different strains in order to see which ones work. "We cultivate three, four or five, depending on the space we have", explains Bobadilla.

They based their approach on their experiences with their children, and on studies that guarantee the effectiveness of cannabis consumption against epilepsy. "It's an ancient plant with many properties, and finally the Legislative Power has begun to see this. Personal cultivation is not regulated, but in Article 8 of the law there is a provision that exempts us from Article 5 of the drug law (which imposes jail time on those who produce cannabis). In a way, we generate a legal umbrella so that we can continue to operate as we have been," explains Salegh.

The fight by these families began in October of 2015, when one of the mothers, María Luisa Alisi, obtained the first permit from the Anmat (Argentina's National Drugs, Foods and Medical Technology Administration) to import the oil derived from Charlotte's Web cannabis to her country in order to treat her daughter, who suffers from West Syndrome, a disease affecting children characterised by spasms. Thereafter, the applications multiplied: after two months there were already 60 families asking for the product and, after six, the figure rose to 150. Thus, fathers and mothers began to join forces, and realised that they were not were alone in their battle.

Under the slogan "Pain can't wait," the families launched a lobbying campaign targeting the Legislative Branch to have their voices heard on camera and to change the law to promote cannabis cultivation and consumption in Argentina. This is a plant which they say has saved their children's lives. Along the way they benefitted from the social support by the Argentine people and other associations that are struggling to implement the same kind of regulation in other places. Asked by the NGO Mamá Cultiva, several celebrities in the country backed their cause and appeared in videos supporting the cultivation of plants by the families of patients.

The legalisation initiative was also supported by Lamadrid, a small town 500 kilometres from Buenos Aires, where the community fighting for legalisation grows every month, enlisting doctors, farmers, criminal lawyers and, above all, dozens of mothers from across the country who have seen how the lives of their sick children have improved once they abandoned drugs and opted for the ingestion of cannabis oil. The pressure exerted by these groups prompted demands for a law to legalise cultivation for therapeutic purposes.

These were calls reinforced by social pressure in recent days, as various organisations in favour of the decriminalisation of cannabis marched on 8 December in Buenos Aires to ask the State to authorise personal cultivation. This was the seventh edition of the "March for Marijuana," and this year it drew thousands of people to the Plaza of Mayo in the capital, to demand the legalisation of cannabis for therapeutic and recreational purposes, as well as the end of police persecution of the plant's growers. In Argentina a cannabis grower is arrested every hour, a statistic that threatens thousands of people who grow the plant for personal consumption all over the country.

With this approval, Argentina joins Uruguay, Chile, Mexico and Colombia, where cannabis use has been depenalised in different ways; in some, recreational use, in others only therapeutic use, but in all the countries it has sparked a social debate that has served to destigmatise the plant and favour discussions of its benefits.

Uruguay paved the way: in December of 2013 it was the first country in the world to approve a law that regulated cannabis production and commerce. Producers and consumers must register, and the law allows the production, distribution and sale of cannabis, personal cultivation (of up to six plants per household), clubs of consumers (up to 45 members and 99 plants) and the purchase of up to 40 grams per month at licensed pharmacies. However, sale to the public has still not begun. The latest information from the Uruguayan Government says that its marketing will commence in 2017.

Mexico, meanwhile, also authorised cultivation, transport and consumption at non-profit clubs, after a court ruling in this area. However, in what is the world's second leading producer of cannabis, there is still much work to be done to overturn restrictive legislation. The authorisation, for now, will only be issued to those who specifically request it, but it is still a step towards liberalisation with regards to cannabis consumption.

Colombians also have legislation featuring regulations governing the medical and scientific use of cannabis. They can plant, cultivate and distribute in accordance with the law, which is especially tough on authorised growers who commit irregularities.

Chile, meanwhile, a country that, along with Paraguay, produces the most cannabis in Latin America, has recently depenalised the personal cultivation of the plant for therapeutic and recreational purposes. Chilean adults now have the right to grow one plant and carry two grams of grass.

The increase in the number of countries that have depenalised the use of cannabis has confirmed its proven benefits, demonstrated by numerous scientific studies. In addition, there are more and more places where personal cultivation is allowed, a step that is still pending in Argentina to make this first victory complete. It remains to be seen whether the country's authorities soon decide to follow in the footsteps of some of their Latin American neighbours.