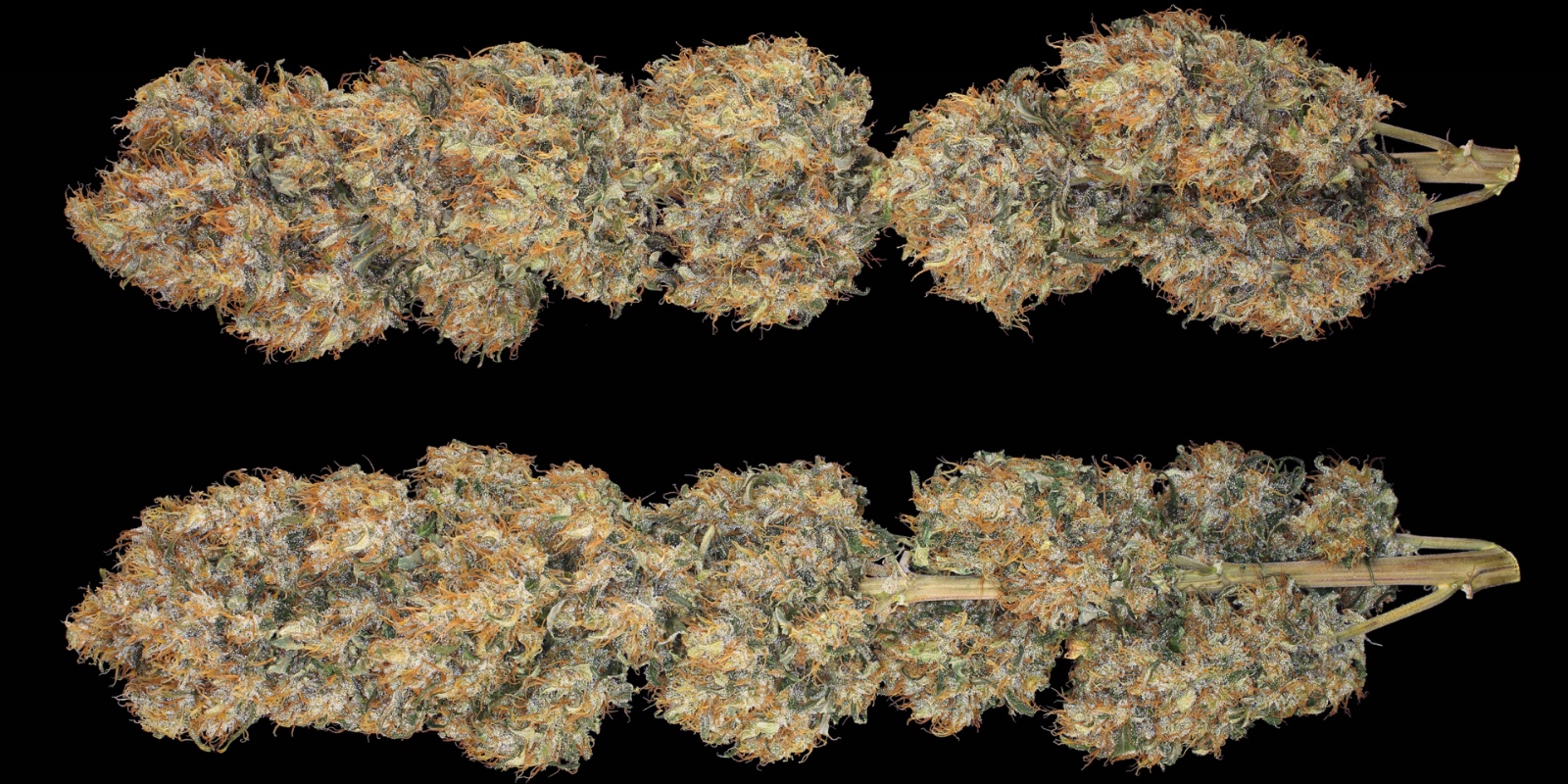 After his buddy Dockie had gained such great experience with Dinafem seed strains in recent years, Ellis D. wanted to try some of their strains as well. He was particularly curious about the CBD strain collection created by the Spaniards, and since The Doc had grown both their Original Amnesia and Amnesia Kush with great success, he wanted to build on that and first of all picked Amnesia CBD out of Dinafem's comprehensive CBD strain assortment. Being the ardent sativa and haze lover that he is, Ellis D. was very much looking forward to that strain, wondering whether Dinafem would have managed to transfer the outstanding quality of Original Amnesia in terms of effect and aroma to its CBD version. While it was clear of course that the mother strain's extremely strong high would be retained only rudimentarily in the latter, markedly extenuated due to the considerably lower THC and substantially higher CBD content. Which, however, could be appreciated by medical-only users who aren't out for heavy psychoactive effects or even wish to avoid such.

On the average, Amnesia CBD's THC count of 8% is slightly outbalanced by its two-digit CBD count of 10%. According to Dinafem, this strain always comes with a CBD/THC ratio of at least 1:1, which means important reliability for medical patients. The high CBD content of Amnesia CBD was achieved through crossing the Original Amnesia with the almost pure CBD strain "Dancehall", which was created by Reggae Seeds. Dinafem bought thousands of seeds from them, including the right to use this strain for their own breeding projects. So from that huge batch of Dancehall seeds, the Dinafem breeders selected a few specimens with an especially high CBD count and used them to breed CBD versions of some of their best regular strains.

This strain always comes with a CBD/THC ratio of at least 1:1 which means important reliability for medical patients

Amnesia CBD (60% sativa, 40% indica) is a fairly tall growing plant with the ability to produce big yields – up to 550g/m2, indoors and up to 1.1 kg per plant outdoors. Under artificial light, she needs 60-65 flowering days to mature. Under natural light, she finishes around mid-October. Just like her mother Amnesia, she drips with resin, plentifully bestrewn with trichomes. Taste and smell wise, she pronounces a distinct haze note which may be complemented by hints of lemon and/or sweet fruits. Dinafem describes its moderate effect as invigorating and inspiring, causing a feeling of breezy cheerfulness that alleviates stress and enhances one's daily activities. Under the influence of Amnesia CBD, one tends to like to socialise and maybe go for a night out.

Two Amnesia CBD seeds were germinated by Ellis D. in little pots covered with clingfilm. Both seedlings appeared above the ground within 2.5-3 days. For five days, they grew under a SANlight M30 LED module, before Ellis D. repotted them into 11-litre pots filled with Compo potting soil and, together with two other plants, placed them under a SANlight S4W LED module with much more light power. Three veggie weeks he gave them, and when it was about time to switch to flowering, they had evolved into compact well-branched plants with dark green shade leaves the thin-fingered shape of which was typical of sativa and Amnesia genetics. Looking almost identical, the difference in height was a mere two centimetres (28 and 30 cm).

A second S4W module was hung over the plans to encourage big bud growth. The stem elongation effect revealed by the plants in the early stage of flowering was very strong, stronger than Ellis D. had expected in view of their merely modest sativa share of 60%. It didn't come to an end before five weeks of flowering were over, with the plants almost having triplicated their heights at that time, gotten close to the one metre mark. While shooting up that much though, they didn't neglect flower production at all, but kicked into full gear about two weeks after the light cycle had been switched to 12/12.

At an early stage already, it became obvious that Amnesia CBD would exhibit a very high calyx-to-leaf ratio as an immense number of white hairs was emerging from the young buds. Also, the resin glands made an early appearance, after less than three weeks of flowering, the buds started to twinkle auspiciously. Both plants still were in step with each other and bore a striking resemblance in every respect, displaying a very hairy, enormously dense flower structure and generating huge long head buds that were towering from the middle, as steep and colossal as the Eiffel Tower, far beneath surrounded by numerous thick side buds protruding from rhombically arranged side branches.

The highly intense fragrance given off by the two Amnesia CBD plants amazed Ellis D. and revoked nostalgic feelings inside of him as the buds smelled like a traditional unadulterated Haze: bitter-sweet, strongly reminiscent of sandalwood. Rejoiced Ellis D.: "They are precisely smelling like the original Amnesia Haze or also a Neville's Haze, I simply love that legendary connoisseur odour! Very remarkable that Dinafem has managed to fully stamp that haze aroma on the CBD version, there's no olfactory trace of the CBD father plant at all." While corresponding to a pure Haze in terms of aroma, the opposite was true for the plants' bud size and density – it seemed to Ellis D. as if the fluffy buds of an Original Haze were blown up with anabolics, made massive and hard. They packed copious amounts of resin glands, beautifully glistening like a southern starry sky. The flowering stage lasted a bit longer than stated by Dinafem – instead of 60-65 days, the two Amnesia CBD plants grown by Ellis D. took 69 and 72 day to fully ripen. "But such a brilliant haze quality is more than worth the little extra wait, and approximately ten weeks of flowering certainly aren't much either," said Ellis D.

Final plant heights were measured at 86 and 90 cm. As it turned out a few weeks after harvest (which was quickly done thanks to the low leaf share), the plants' centimetre measures roughly equated to their harvest gram figures – Ellis D. reaped a fantastic dry reward of 81.2 and 93.8 grams. 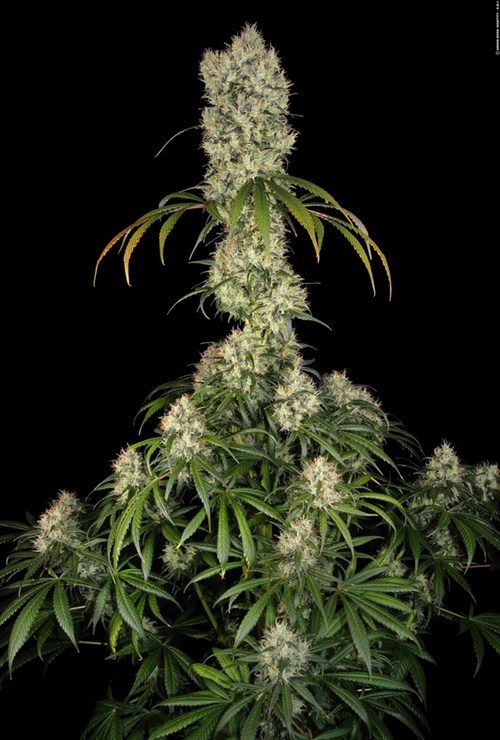 Those colossal head buds alone weighed in at sensational 33.3 and 37.1 grams. Enthused Ellis D.: "This is just…wow! Such high yields I hadn't expected from a haze-dominant CBD variety. And then this terrific smell – the dried buds are presenting an even more refined classic haze fragrance that leaves nothing to be desired."

What he couldn't tell from their appearance though of course was the amount of CBD contained. But Ellis D. believed that testing the Amnesia CBD flowers in his Mighty vaporiser would give him a rough idea of that. Half a gram he placed into the filling chamber and after it had heated up to 185°C, he put the nozzle to his lips and inhaled deeply. The Amnesia CBD vapour felt silky soft when it went down into his lungs where he kept it for a while to get an optimum effect. In his mouth, it left a tangy haze sweetness with a long finish which made Ellis D. praise Amnesia CBD as "a most delicious gourmet weed of which one instantly wants to taste more."

Already the first toke slightly enhanced his sensory perception. His eyes, previously very tired from a long computer session, were immediately wide open again, and after the second toke even kind of turbocharged, alert and focused like the eyes of an eagle having prey in his sights. There definitely was a fresh tingling sativa drive at work, providing an invigorating effect, both physically and mentally. After four tokes, Ellis D. had enough for the time being as he felt elated, his inner sun had risen, painting a happy smile onto his face and conjuring nice thoughts into his brain. There it was again, that mentally stabilising effect of cannabidiol that can make you feel unshakeable. While that peppy sativa drive was gone after about 20 minutes, Ellis D. still felt harmoniously balanced one hour after his first vaporiser session. When he switched the vaporiser on again, he took six tokes this time as it was the second round and the weed no longer pristine. But the effect was still invigorating and incited him to put on his rollerblades and cruise around outside.

Concluded Ellis D.: "Amnesia CBD is a lovely CBD weed strain with a very pleasant, activating, mood-lifting and balancing effect. A both beneficial and flavoursome medicine not only applicable for habitual cannabis users. Also horticulturally, this super hazey CBD power house has fully convinced me, thanks to its easy management and ample yields. Altogether, I've experienced a dazzling Dinafem seed strain premiere in my grow room! There surely is a lot more to come…" 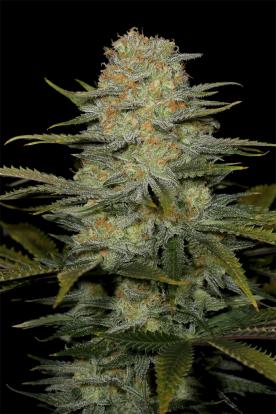