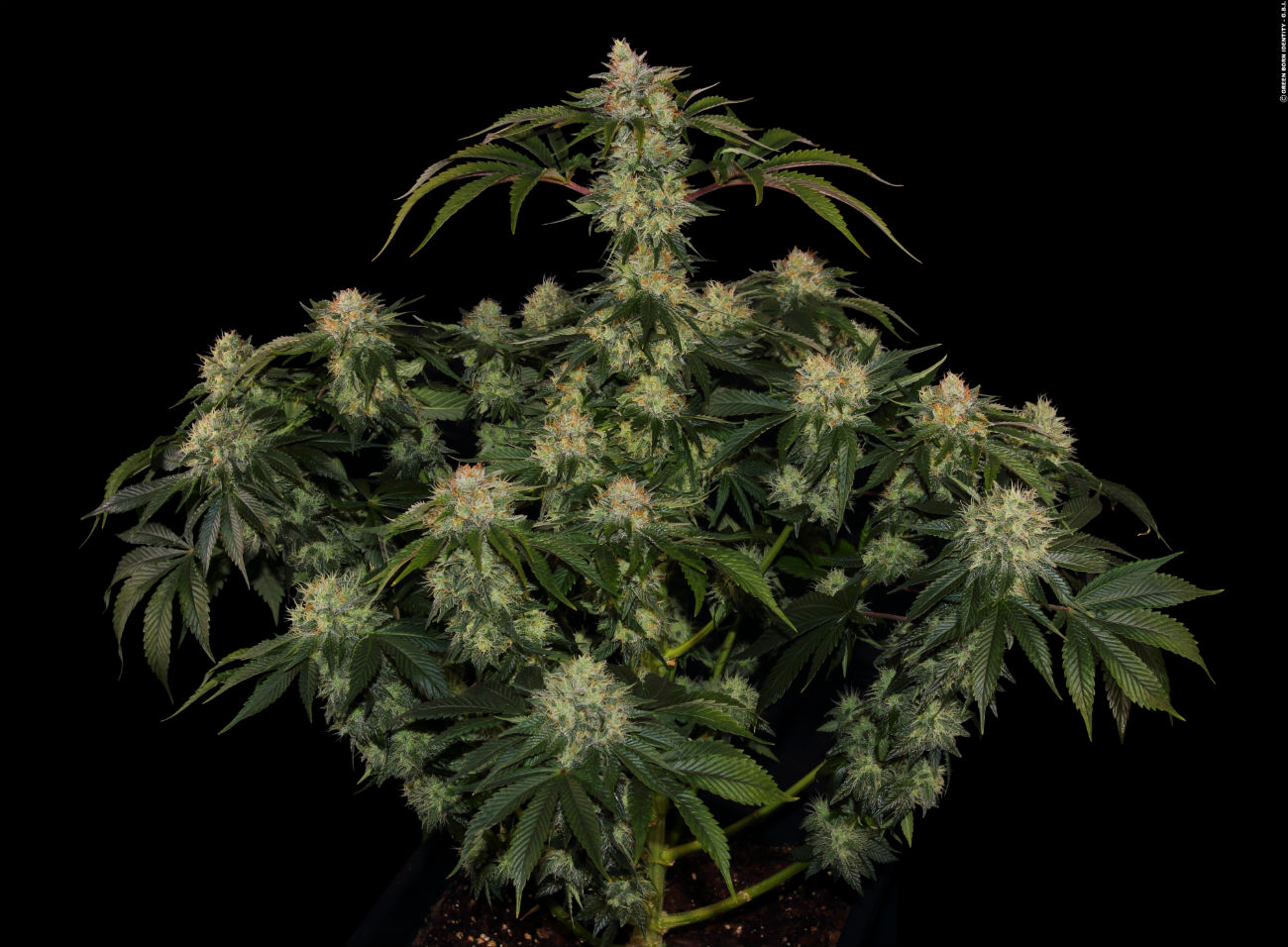 The nice thing about the current CBD wave is (of course aside from the medicinal blessings this cannabinoid has) that in addition to completely new CBD strains, several cannabis classics are released with a new livery, hitting the market anew as CBD versions. Given their attenuated psychoactive effect (through a lowered THC and increased CBD count), one may tend to call them "light" versions.

But that wouldn't reflect their preciousness, after all the attribute "light" is negatively associated with products from the food and tobacco industry nowadays, often being misleading – for example, think of "light yoghurt" as rich in calories as standard sugary yoghurt or "light cigarettes" (a meanwhile forbidden branding) that are even more harmful than regular ones.

The opposite is true though for cannabis strains modified into CBD varieties, as such have an additional health benefit through their drastically increased share of CBD which means increased therapeutic value for a lot of indications. Spanish seed company Dinafem is intensely engaged in breeding CBD strains, also having given a rich CBD injection to some of their top sellers to create respective CBD strain versions such as Moby Dick CBD, Cheese CBD, Amnesia CBD and OG Kush CBD.

The highly THC-rich parental strains of which simply have too much psychoactive power for some users, particularly newcomers who've never tried cannabis but want to experience its medical benefits. Thanks to the fact that the modified strains have as much CBD as THC or even more, the effect becomes considerably more moderate and manageable. But while their THC content is cut down by half or even more, these CBD versions don't lose any or only very little of the intense flavour of their parental strains so that connoisseurs are in for a tasty treat here, too.

Talking about flavour almost inevitably leads to talking about the legendary OG Kush. As the most influential iconic strain of recent years, these outstanding genetics originating from California are well known amongst everyone interested in cannabis strains. It wasn't by chance that OG Kush took first place in the "25 Greatest strains of all times" list published by High Times Magazine in 2014. OG Kush here, OG Kush there – not only in the USA any longer, everyone's mad about this strain.

CBD varieties, as such have an additional health benefit through their drastically increased share of CBD which means increased therapeutic value for a lot of indications

Several factors are responsible for OG Kush's special magic: its very catchy strain name, stunning potency and highly specific overpowering aroma blending a basically oily smell with coniferous and citrusy aspects. Plus a lot of prominent support by celebrities such as US hip-hop group Cypress Hill, the members of which heavily promoted this strain until it literally was on everybody's lips and super-hip: cool, cooler, OG Kush!

Dinafem managed to reel in the original genetics and soon OG Kush became one of the best-selling strains. Due to the big popularity this strain enjoyed, not only for recreational but also medical use, breeding a CBD version of it was more than obvious then. So OG Kush was transformed into the "defused potency bomb" OG Kush CBD, a strain that still retains a two-digit THC count of 10% though which according to Dinafem leads to a pleasant, somewhat euphoric and more cerebral than bodily effect of medium duration.

Its CBD content is specified at 10%, too, with the Spaniards guaranteeing that the CBD/THC ratio always is at least 1:1, but can even amount to 2:1 depending on the phenotype. They describe OG Kush CBD as a very resinous sativa-dominant (60:40 sativa/indica) plant with fairly wide internodes and broad leaves – plant attributes that are also true for the mother strain OG Kush. And also the CBD descendant's basic data are in accordance with the latter: 55-60 days of flowering, indoor yields of up to 550g/m2, maturity under natural light around mid-October, outdoor yields of up to 1100g/plant. 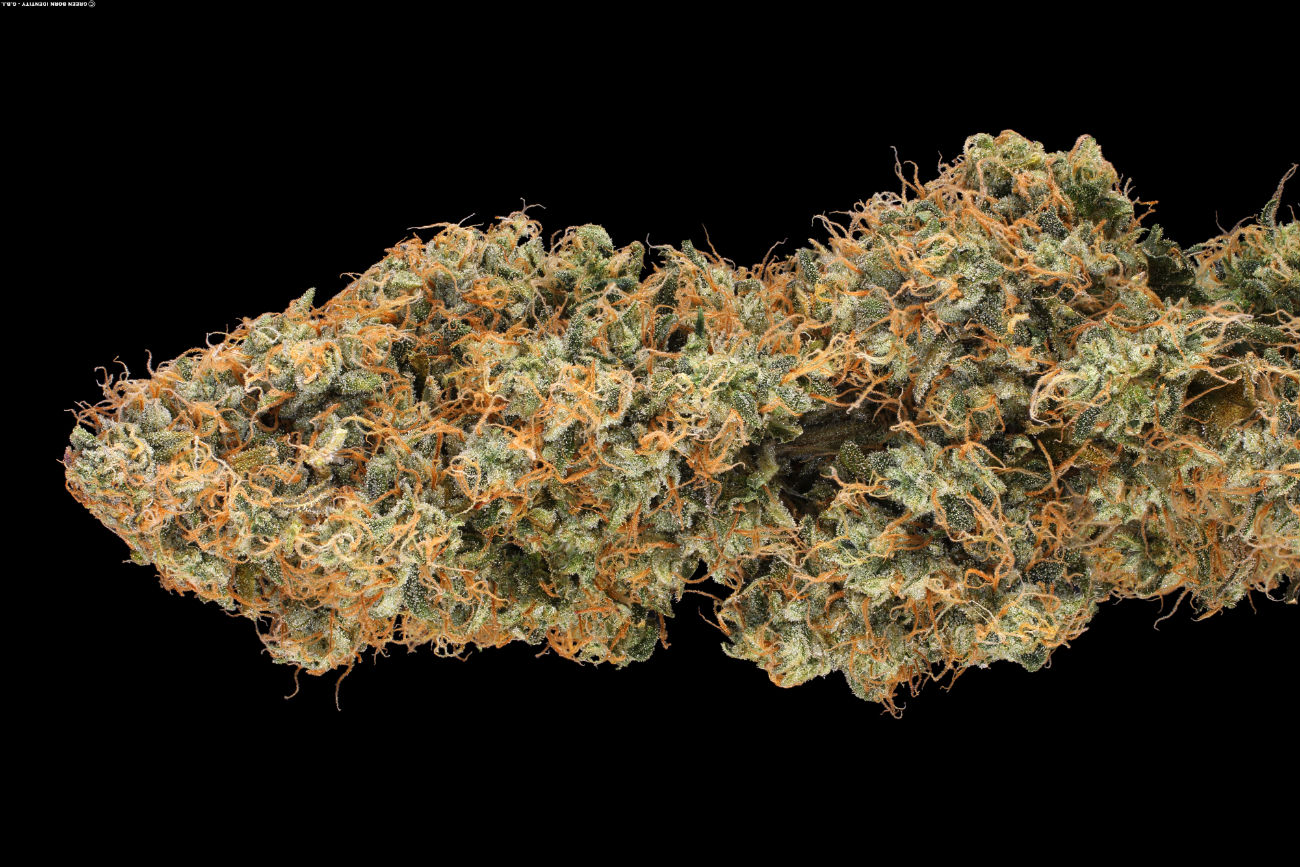 As a matter of course, also the famous OG Kush flavour has been retained, jam-packed with notes of oil, lemon, wood and spices. OG Kush CBD received early applause at the Spannabis Champions Cup 2017, pocketing a third place in the CBD strain competition. Master grower Ellis D. had been curious about this strain for quite some time and recently put it to a cultivation test together with Dinafem's Amnesia CBD. So that two giants in the world of cannabis strains were facing a CBD version test in his grow room, promising a spectacular showdown!

Germination went very well, after less than three days, the seedlings had shoved their heads through the soil's surface. The plants spent three weeks in the veggie stage, exhibiting uniform growth with fairly low heights and short internodal spacing. When Ellis D. switched the timer to 12/12 to usher in the flowering stage, the two OG Kush CBD specimens had grown heights of not more than 19 and 21 cm. Which, in view of the generally more or less lanky appearance of OG Kush plants, surprised Ellis D. a bit so that he said to himself "well, they'll probably stretch like hell during flowering then."

One of the plants lived up to that expectation in the period that followed, mightily shooting upwards during the first five weeks of flowering – it was one of the strongest stem and branch elongation effect ever witnessed by Ellis D. with a cannabis plant. The other one, however, stretched only slightly, keeping its bushy shape also during flowering. But regardless of their different height growth, flower production set in equally early and vividly with both plants, already after three weeks they were full of white blossoms. Initial trichome frost appeared super early on the taller plant, after four weeks not only the calyxes and sugar leaves were covered in resin, but even the stalks of big leaves protruding from the buds.

The smaller plant wasn't sparing with resin glands either though, soon becoming just as resinous, and, much to Ellis D.'s delight, producing very voluminous chubby side buds that surrounded a more pointy head bud. This plant had a somewhat lower calyx-to-leaf ratio than the very hairy tall specimen of OG Kush CBD which was apparently driven by a stronger sativa impulse. But only the top buds of its numerous long side branches were large-sized, followed beneath by quite small flower clusters. Which looked as if each branch had crowned itself with a fat head. While their size and structure varied a bit, all the buds of the two plants were invariably dense and hard.

After four weeks not only the calyxes and sugar leaves were covered in resin, but even the stalks of big leaves protruding from the buds

And also super crystalline, with their thick trichome crusts shimmering so silvery white that Ellis D. imagined Mother Holle had appeared and, instead of snow, out of her pillows poured vast amounts of trichomes over the plants. Ellis D. was happy when he noticed that both plants were giving off that typical OG Kush scent he loves so much: "Welcome to the petrol station! While all the buds are basically smelling oily, differences can be found in the secondary notes – the tall plant comes with a coniferous hint of pine, whereas the other reveals a slight dash of lemon. Both these mélanges are so delicious that I could keep sticking my nose into these buds for hours."

With a final height of 93.5 cm, the tall plant had become 4.5 times taller than at the beginning of flowering. It was harvested after 64 days which exceeded the official harvest window by a few days, but given its visually and olfactorily outstanding quality, Ellis D. felt that this was absolutely acceptable. The bushy OG Kush CBD specimen – 56 cm tall in the end - achieved a timely finish when reaching the home stretch after 58 days.

When the harvest was dried and cured a few weeks later, Ellis D. was well satisfied with dry yields of 55 (small plant) and 69 (tall one) grams. After plenty of chlorophyll had disappeared from the buds, their aroma came forward even more distinctly: the smaller plant's "citrus fuel" buds caused Ellis D. to think of himself standing in a smelly car repair shop and grating the peel off a lemon. The other plant's buds made him fantasize that he had parked his car in the middle of a pine forest and done an oil change. 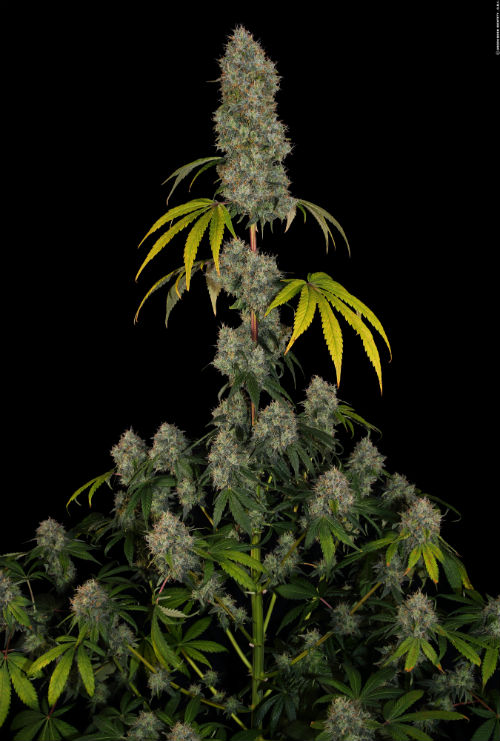 Ellis D. test-vaped the "citrus fuel" buds at first. In view of their indica-style appearance, he wasn't too surprised that he began to feel pretty stoned after some hits from his "Mighty" vaporizer. Not in a devastated manner though, with a dull and numb sensation in his head, but just pleasantly cushioned and mellow. He entered into a wadded mental comfort zone and got rid of the stress accumulated during the day. Also, his back muscles, painfully tensed-up from a long day's physical work, started to relax.

Half a gram of OG Kush CBD was sufficient for three vaporizer sessions and several hours of soothing relaxation. The toothsome taste was in a class of its own: on the inhale, he briefly sensed a fresh sourly fruity flavour that was kind of volatile though, quickly setting the stage for a full-bodied, long lasting earthy-spicy taste experience. Next came the "pine fuel" buds. After a few vapor puffs, the sample provided a stimulating burst of freshness to Ellis D.'s head that further elevated his mood.

However, that refreshing shot of sativa euphoria didn't last very long and gradually gave way to an overall calm feeling of placidness and mental balance. Physically, that sort of OG Kush CBD had a relaxing effect right from the start, just like the other type. Flavour-wise, it also was just as intense and palatable, with the only difference being that on the inhale, its secondary pine note had already merged with the predominant oily character instead of separately running ahead first. Ellis D.'s final conclusion: "A sublime CBD strain adaption by Dinafem that definitely does honour to its legendary mother strain OG Kush. The flavour comes very close to the original and the softened buzz it delivers is highly pleasant and therapeutically effective, leading to a sense of physical and emotional well being – I think the high share of CBD is strongly noticeable here. A kind of OG Kush marijuana that doesn't send the user sprawling on the floor, but nevertheless retains the high coolness factor of this strain legend: For me, OG Kush CBD is the coolest green medicine!" 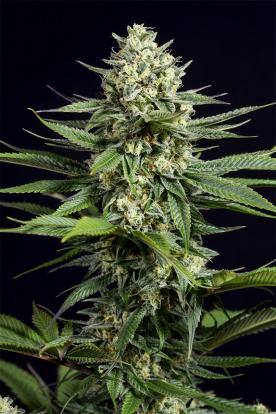