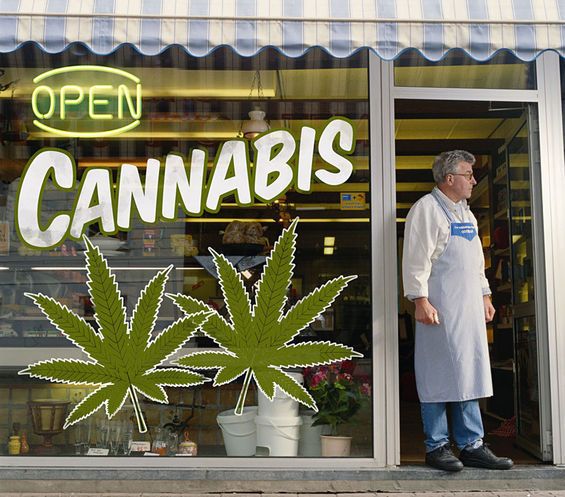 Today, we will tell you one of these stories. It happened in a state with the name of a river, Colorado, on the west of United States, known around the world for its Rocky Mountains, its capital (Denver) and, just recently, for being the first state in this country to legalize marijuana for recreational purposes.

On January 1st, as the 12th stroke of the gong rang, Amendment 64 came into force, allowing Coloradans and tourists to nicely enter a store, approach the counter, ask for three grams of pot, go out in the street, roll a joint and smoke it on a cop’s face. Not only that, it will allow the production, distribution and sale of grass to flourish as never before (never better said).

However, the industry built on cannabis consumption in Colorado, until now only legal for therapeutic use, has been thriving there for quite a while. Its development is an example for other countries where ban could - and should – be lifted soon. What to do when soft drugs come out of hiding? How to shape a promising business network starting from a black market controlled by gangs and drug dealers? Let's see what happened in the land of the Rocky Mountains.

Back in the year 2000, Colorado voters said yes to the amendment which legalized marijuana consumption for medicinal purposes. Protected by the law, dispensaries emerged; something like drug stores where the flagship product is the joint and clients are more like patients (at least in legal terms).

Originally, they operated with barely any control from the health authorities, but soon the Department of Public Health decided to take action on the matter by limiting to five the number of patients who could be served at each establishment. It was a scandal. The cannabis associations threw up their hands in horror and, after a long court battle, managed to overturn the measure by the end of 2007.

Another two years passed by, during which any attempt to recover the restriction failed. The debate remained at a standstill, until 2010 brought a bit of common sense to it. As the veto was lifted a decade ago, no one would have guessed that a new market would emerge from it with the potential to become an entire economic sector: that of medicinal marijuana. But so it happened, and now it needed regulation.

The blast that opened Pandora’s Box

In 2010 the rules were set. A licensing system was established, compelling farmers and owners of establishments to team up. Until then, the former had worked as private individuals, informally growing marijuana and selling their production to dispensaries or straight to customers, directly or through delivery services. With the new regulation, this became impossible.

From that moment on, farmers began to need the entrepreneurs who possessed a license to sell, and the entrepreneurs the farmers, since the law required them to produce at least 70% of what they sold. One had the experience and the knowledge and the other had the money and the points of sale. It may seem a question of synergies, but it was rather was a forced symbiosis, essential to survive and which, in many cases, brought up unpleasant consequences.

At the beginning, everything seemed to go smoothly. The state’s strict control kept federal officials away and banished the fear of their raids. This generated the stability needed for the industry to finally become more professional. Many decided to take the plunge and undertake, applying for licenses, opening stores ... It was the usual calm before the storm.

With the arrival of new players, the medical marijuana market became highly competitive, especially due to another provision of the 2010 regulation, which linked the volume of production allowed to the number of registered patients. Entrepreneurs applied a simple logic: they needed to attract more patients to produce more grass and make more money. It was crystal clear.

What they did not know is that such logic might work perfectly to sell shoes and watches but not so easily for cannabis. Their partner farmers explained it to them: you do not produce more weed by simply pulling a lever and accelerate the assembly line. It is a delicate process, which lasts six months and depends on at least two crucial factors: light and space.

To grow more plants you need to rent larger facilities and purchase expensive artificial lighting systems, shooting up costs. Otherwise, the quality of the product suffers. So, my partner, it is impossible to produce more marijuana and lower the price at the same time, as you intend. Here your capitalist dogmas do not work.

But it had to work, because there was no choice. They had promised to pay suppliers and tenants as soon as the harvest was ready and sold, although there was only one way to make money in a competitive market: to lower prices, get new patients and increase production. The dollar-store style: margin is small, but by selling a great amount, it compensates.

Many eventually did that, dragging others and these in their turn dragging some more, and indeed they obtained some customers; some people would rather pay little for mediocre grass than paying a bit more for real weed. They plunged into a maelstrom and did not realize that they were killing the business. This is how the 2011 marijuana crisis erupted in Colorado.

Prices kept falling and for many cannabis SMEs it was no longer profitable to cultivate marijuana so in such a expensive way to sell so cheap, so the times of hiding and smuggling returned. In neighboring states where marijuana was completely banned, there were many people willing to spend large sums of money in low-quality marijuana. On the black market you get a high price for the product but also for the risk.

Some tried that and fell into the clutches of federal forces, others closed because their losses were unsustainable ... The fact is that those who had opted for the dollar-store model foundered, leaving the market in the hands of those who, with good reason, had chosen to keep the prices in their right place and maintain integrity.

They have been doing fairly well so far, but it will not be until 2014 that they will reap the real benefits. Marijuana for recreational use is finally legal in Colorado and many are comparing the scenario ahead with the end of Prohibition. In addition, cannabis-related tourism is expected to rise and some speak of Denver as the new Amsterdam.

And that's not by far the most important aspect. Businessmen in the region have become an example for entrepreneurs seeking to open market elsewhere within and outside the United States. They get paid for learning from their mistakes, but also for replicating their successes. And there is no better proof that the best place for marijuana is in stores and not in the smuggling market than Colorado, where in the end the good guys won. What did you expect? After all, this is an American movie.

The first sale was made to Sean Azzariti, an Iraq War veteran who has lobbied publicly for legalization and says pot helps mitigate problems stemming from his post-traumatic stress syndrome. Azzariti spent about $60 at 3D Cannabis Center for an eighth of an ounce of "Bubba Kush"