Also referred to as lion's tail, Leonotis leonurus is better known to cannabists as Wild Dagga, the wild cannabis. The name is certainly promising, but the characteristics don't disappoint either, and are the doorway to a plant related to Cannabis sativa that has a lot in common with its homologue.

Native to South and East Africa, from where it spread throughout the world, the genus Leonotis consists of 48 different plant species. These were used traditionally by indigenous people including the Zulu and the Bushmen, who utilized them for their rituals and as charms and amulets with the power to keep cobras at bay and to facilitate the healing process in the event of a bite. As for Leonotis leonorus, Mexican shamans used it to brew their secret potions and smoked it together with other leaves, like that of the tobacco plant. In Central Africa it was used as a relaxing tea, and it was not until the 17th century that it arrived in Europe.

Traditional medicine, instead, has used it as a decoction, both orally and topically, to treat a number of diseases and conditions including haemorrhoids, eczema, itching, headache and constipation. Another common practice was to smoke the dried leaves and flowers to ease the symptoms of epilepsy. Furthermore, it was used as a remedy not only against cobra but also against spider bites. In this context, scientists have emphasized the need for further research into the medical properties of the plant - and not just the psychoactive effects - in order to ensure a safe, high-quality, effective product to future patients. 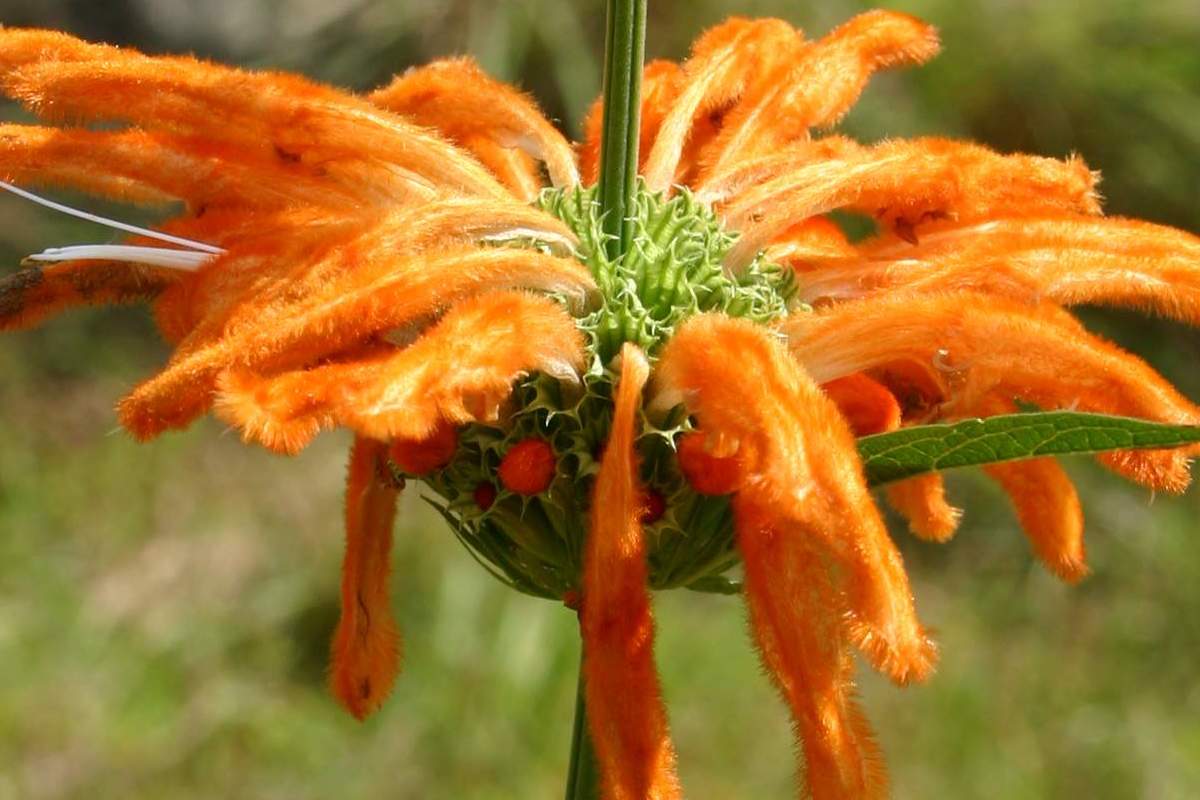 Clearly, both the genus and the species Leonotis leonurus were popular with the indigenous peoples native to the regions where these plants grew, becoming a common alternative to cannabis over the centuries. In fact, with marijuana having been prohibited in many countries by their narrow-minded politicians or being frowned upon by a reactionary society, Leonotis leonorus, which contains a substance with effects similar to psychoactive tetrahydrocannabinol or THC, was informally renamed as Wild Dagga (wild cannabis).

True to its name, the effect is a potent sedating sensation with also some euphoric reactions that heighten the senses, as you would expect from any good THC substitute. And while it is softer than cannabis, it is not recommended for people with mental health or emotional problems, and should not be used as a cannabis substitute during pregnancy either. Also, as it can be as effective as some medicinal products, users are advised not to drive or operate machinery under its influence.

Wild Dagga's orange petals are smoked alone or mixed with other herbs, and contrary to cannabis, it is common to smoke the leaves too, which can also be soaked. Alternatively, the roots and stems can be infused into tea, a common practice also among advanced cannabis users who don't want to discard the trim.

Leonurine, the secret of the plant

In the '30s, Chinese chemists Seiko Kubota and Seikichi Nakachima isolated an alkaloid found in Leonorus sibiricus, another plant species belonging to the genus Leonotis that is native to Mongolia and Siberia, although nowadays it grows all around the world.

The alkaloid in question is leonurine, a water-soluble compound similar to THC that aroused the interest of the Chinese government, who synthesised it in the late '90 and carried out research in the field of gynaecology. The synthesis process, though, remains to date a mystery. Similarly, the anti-inflammatory and analgesic effects of Leonotis leonorus on animals have also been studied. 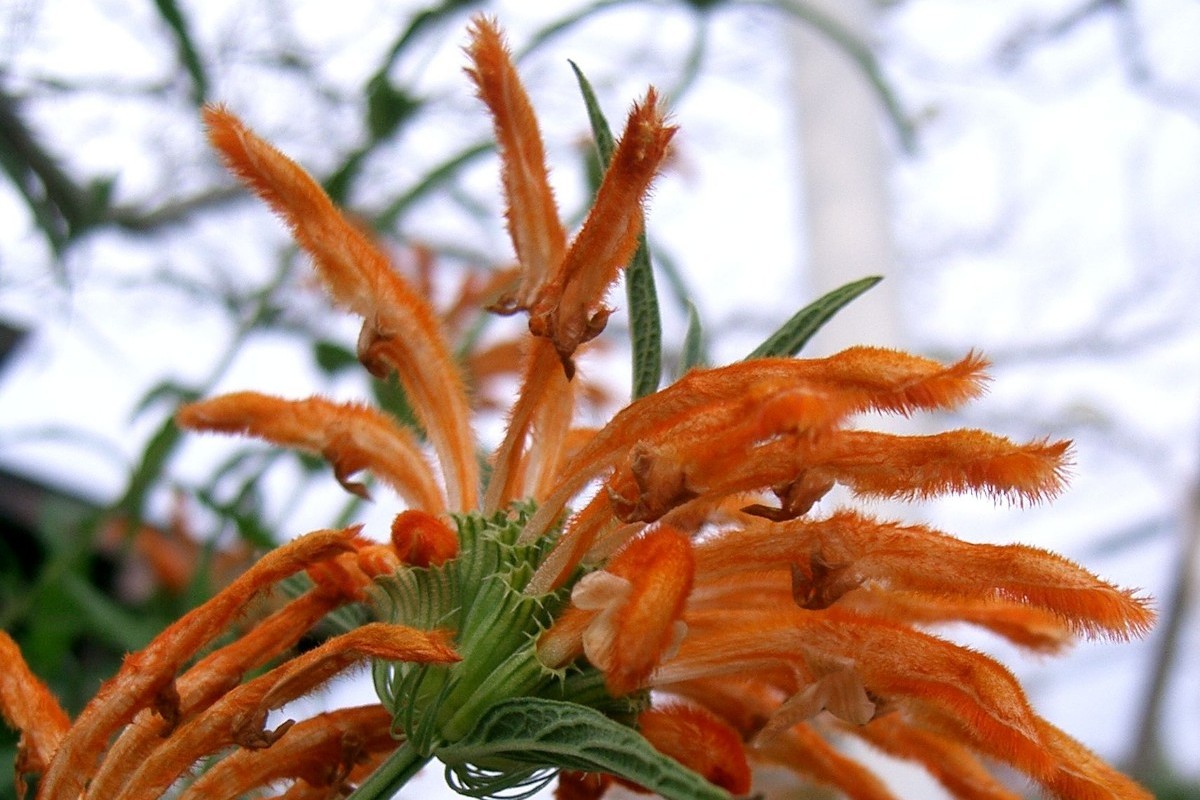 How to grow Leonotis leonorus

Now that you know the potential Leonotis leonorus holds, you might be considering growing it at home. The first thing to do is get the right seeds - they are similar to that of other non-psychoactive plants in the lamiaceae family - and then you can just grow it as any other plant. The flowering period stretches from spring to early autumn, which is a major advantage considering the plant's sensitivity to frosts. Easy to care for, it enjoys the sun and tolerates dryness, so it is important to water it only when the soil is completely dry. If the weather is mild, you can grow it outdoors, but if you live in a colder area you may be best growing it in pots so it can be brought indoors when the weather gets bad.

As for general maintenance, you will only have to clean the branches - it produces plenty of them - as they lose lustre, and the canopy in spring. Also, if your grow space is located in an area exposed to prying eyes, bear in mind that Leonotis leonorus can reach 1-1.5 metres in height - even 1.8 in some cases.

In addition to its many benefits, Leonotis leonorus is grown also for ornamental purposes. Its orange flowers are immensely beautiful and in southern Africa is not unusual to see them surrounded by butterflies and birds that feed on the plant's nectar, meaning that besides obtaining the psychoactive effects of cannabis, you will also contribute to your garden's beauty with the plant itself and the beautiful animals it attracts. A winning combination which the cannabis community should pay more attention to. Hopefully, it will be marketed as extracts and other similar products one day soon.