Nobody would think of germinating a feminised cannabis seed in Belgium in December, since it is well known that a cannabis plant can't grow with little light and low temperatures in the middle of winter. Any outdoor grower knows that the growing season in the Northern Hemisphere goes from April / May to September / October, which corresponds to spring, summer and autumn at that latitude of the globe; whereas the growing season in the Southern Hemisphere starts in September / October and ends in February / March of the following year.

Those who grow outdoors always choose cultivation dates according to their latitude and the season of the year. However, the lunar cycle isn't always taken into consideration because, as far as months go, we tend to focus on the days of the week or whether it's the start or the end of the month, rather than whether the moon is in its Waning Crescent or Full Moon phase. Let's face it, plants don't really care about whether we can spend more time pruning them at the weekend, or whether we can fertilise them more thoroughly at the start of the month because we've just been paid.

As the moon affects the life cycle of plants, we advise you to check the lunar calendar when doing your planning. In the same way that you need to be aware of the season of the year, the latitude, or even the weather forecast before you start growing outdoors, it's important to know what phase the moon is at so as to decide when to germinate, trim or harvest. Therefore, the lunar calendar needs to be placed in context in relation to the different seasons, according to the latitude of the area. This is equally relevant for indoor grows because the moon exerts a gravitational force on all living creatures, so depending on the position of the moon in relation to the Earth, the movement of sap in the plant will increase in either its lower or upper areas.

Which are the different phases of the lunar cycle?

Before explaining which phases of the moon are best for each stage of growth of your cannabis plants, let's start by describing what the four main phases of the lunar cycle are, and how the position of the moon influences all living organisms on Earth. Each lunar cycle lasts around 30 days, so it roughly corresponds to one month. With regards to cannabis plants, it's important to remember that the more light the moon projects onto the Earth, the more the sap tends to concentrate in the upper and aerial parts of the plants (ie. the upper branches and leaves); whereas the less the moon shines, the more the sap tends to concentrate in the lower parts (i.e. the lower branches, stem and roots).

In the lunar calendar, this phase is represented by a circle whose left side is a white thinning crescent. During this phase the moon keeps getting darker and its light fades away, because we can see less and less of its surface from Earth. This is the phase prior to the New Moon phase, and it's the period in which the moon affects the parts of the cannabis plants that are underground (roots) rather than its aerial parts (leaves, etc.). 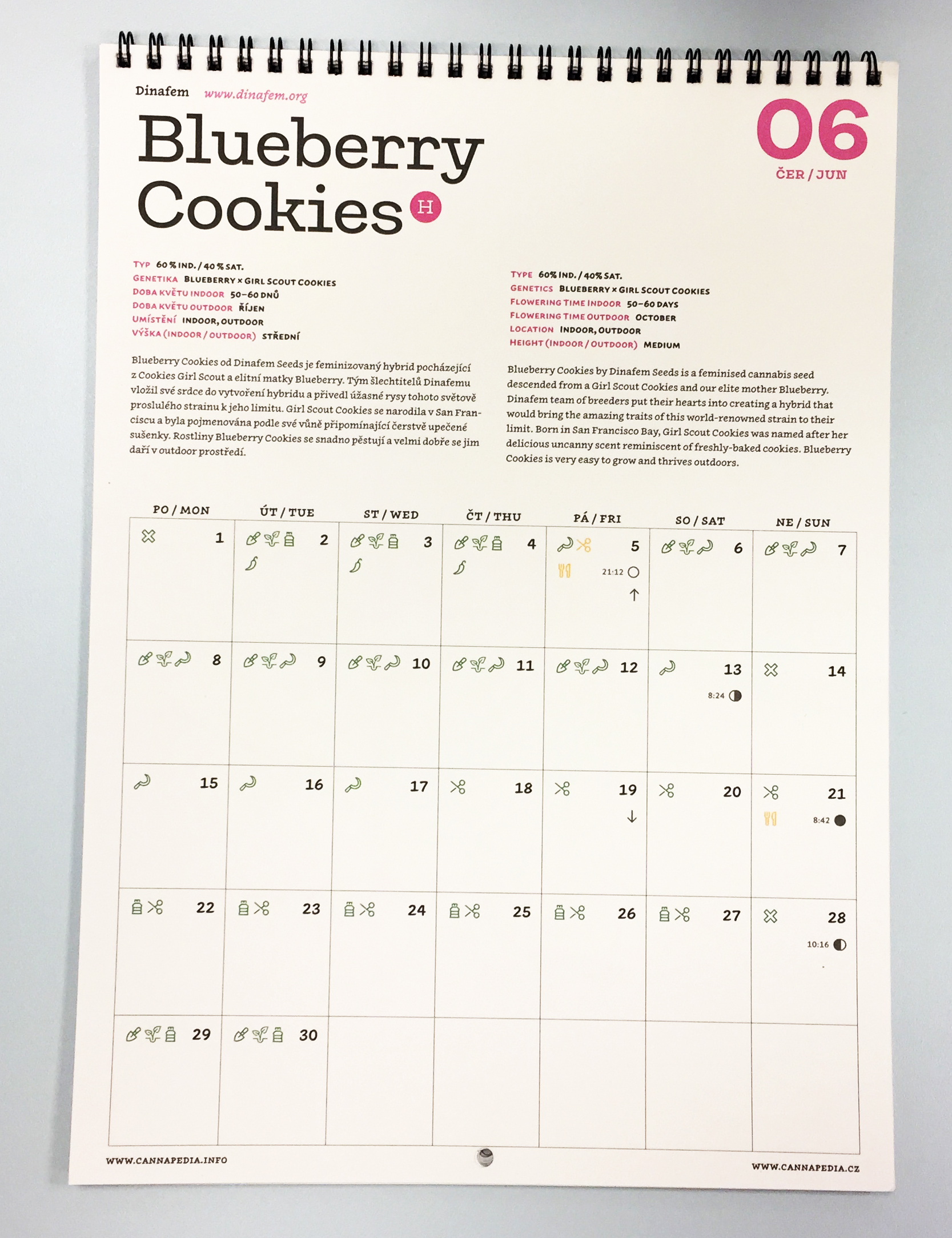 In the lunar calendar, this phase appears as a completely black circle. It's the time when the moon is completely invisible from Earth so it projects the least amount of light. Night skies are moonless, which contributes to the concentration of the sap in the roots of the plants.

The Waxing Crescent is represented by a circle with a thickening white crescent on the right side. The moon gradually recovers its brightness, which encourages the underground sap to move upwards through the roots towards the stem and the lower branches.

Full Moon is represented by a white circle. It is that bright ball of light in the night sky that influences the upper and aerial parts of the plants.

Cannabis lunar calendar: in which phases of the moon should the different stages of growth fall?

After learning what every phase of the lunar cycle means, and how it is represented in the calendar, let's now have a look at what to do at every phase whilst growing cannabis, so that the gravitational effect of the moon encourages the right development of your cannabis plants. So let's see which moon phase is best for germination, transplanting, pruning, and harvesting.

The Waxing Moon phase is the best time to germinate your cannabis seeds, especially towards the end, just before Full Moon. When you see the moon circle with a dark crescent on the left side, this marks the start of the time of the month during which the moon has a stronger influence on the underground parts of the plants. So if you're germinating directly in the soil, this is a great time for the seeds to germinate vigorously, as the water and nutrients in the soil will be absorbed by the roots more easily and energetically.

Waning Moon for transplanting and pruning

When the moon circle on the calendar has a dark right side, this is a good time to carry out all those tasks that may change the normal habits of your cannabis plants, including trimming and transplanting, which would otherwise probably lead to stress. When the moon starts waning (or shrinking), its light loses intensity, so the sap of the plants concentrates on their lower or underground parts. This is why this is the ideal time to trim their branches, as the plant energy will already be shifting to the lower areas.

The New Moon phase, which corresponds to those dark moonless nights, is the perfect time to focus on the part of the plant that we cannot see: the underground roots. The New Moon helps the sap descend to the lower parts of the plant, so this is the best time to look after the roots, as all the sap will be concentrated in them. Radicular fertilisation is the best choice at this time.

We can also take advantage of this time of dark nights to trim the branches and get rid of unnecessary leaves. This way there'll be less energy circulating through them and plants will be subjected to less stress.

That magical moon that shines as bright as a neon sign in the sky encourages the sap of the plants to move upwards. The Full Moon accelerates plant growth, so plants grow more vigorously during this time. The gravitational force of the moon also makes the sap move upwards and concentrate in their leaves, buds and upper parts, leaving the roots energy-deprived.

This is the reason why this is the perfect time to cut your plants, when most of the sap is found in the parts of the plant that are going to be used after harvest, i.e. the buds that will later be dried and cured. According to this, we do not recommend to prune your plants thoroughly when there's Full Moon, as you'll be interacting with the parts of the plant that are more 'alive' at that time, thereby subjecting them to unnecessary stress.