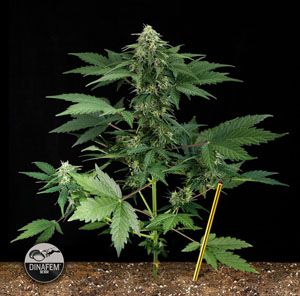 Cannabis ruderalis is a cannabis plant that most-likely originates from eastern and central Europe where she grows in the wild in large quantities. These days you can find her also growing throughout Canada and the United States. This cannabis plant was named ‘ruderalis’ after the German word ‘ruderal’, which means ‘weeds growing by the roadside’. Although some botanical experts claim that Cannabis ruderalis is a species of her own, which would make her a sister of Cannabis sativa and Cannabis indica, Cannabis ruderalis is most-likely a subspecies of Cannabis sativa that escaped from outdoor plantations and ended up in the wild.

The area in eastern and central Europe where Cannabis ruderalis naturally grows has different environmental factors than the areas on this planet where Cannabis sativa and Cannabis indica can be found. The summers are colder and shorter. Besides this there’s during summer a period when it’s light for almost 24 hours a day, not giving the plants enough time to rest during night time. In order to survive, the Cannabis ruderalis adapted to her new location and started to flower quicker and earlier, until they became completely autoflowering at one point.

Although the Canadian growers and Neville did succeed in producing some crossings between sativa, indica and ruderalis, they were all not entirely satisfied and they stopped working with Cannabis ruderalis by a lack of good results. The main problem was the stability; they were not able to produce a stable, potent and fully autoflowering cannabis strain.

The introduction of Lowryder by The Joint Doctor

The whole situation around autoflowering seeds drastically changed when ‘The Joint Doctor’ came into the picture and introduced his ‘Lowryder’ strain. The Lowryder was introduced by The Joint Doctor the beginning of this century and was a crossing between Cannabis ruderalis, a William’s Wonder and a Northern Lights #2. The Lowryder was the first commercial, fully autoflowering cannabis strain on the market and showed the cannabis scene the huge potential of autoflowering Cannabis ruderalis hybrids.

After growing Mexican Rudy for the first time, the Joint Doctor found out that she was very fast-maturing indeed and crossed her with a Northern Lights #2. He chose Northern Lights #2 for her (also) short stature and high level of THC. The result were some F1 seeds that produced nice plants, quick and compact, but they were not completely autoflowering. The Joint Doctor decided to cross this F1 with a few different varieties, of the best clones he could find. One of the clones he used was William’s Wonder. In the first batch of seedlings from William’s Wonder x (NL#2 x Mexican Rudy), he found some unusual male plants that flowered immediately, while they had only grown just a few sets of leaves.

The Joint Doctor used these autoflowering males as pollinators, and this caused his next generation to be fully autoflowering and they all finished within 60 days. From seed to harvest… His plants did not grow taller than 12 inches; an ideal plant for small closet growers. The Joint Doctor realized he had something special.

The first reactions on the Lowryder were skeptical. The Lowryder was not a particular good yielding plant and had a lack of potency. Besides the relatively small harvest and low THC% a lot of people did not like the taste and flavor of the Lowryder. Although there was a lot of skepticism, Lowryder did cause a certain buzz in the scene of cannabis cultivators thanks to her unusual ability to flower automatically.

The Joint Doctor realized he needed something better to come up with, so he went back to the stage of experimenting. He crossed the Lowryder with a Cannabis sativa from Brazil called Santa Maria and after a few generations of breeding to get her stabilized, the result was astonishing. The Joint Doctor had been able to create an autoflowering strain that had more potency and that had a much better taste and flavor than the original Lowryder. Last, but not least, it also had a much bigger yield. The Lowryder #2 was born.